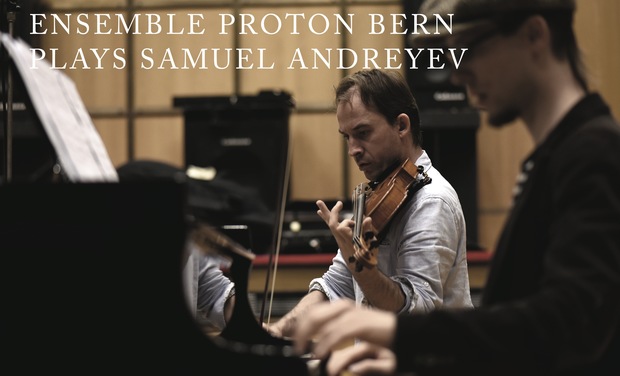 In Paris, 2003, I spent 6 months holed up in a small apartment writing a piece called PLP, scored for lupophone (a rare model of bass oboe) and two pianos. This was a crazily ambitious piece for an unknown composer—intense, exotic, disorienting, utopian and extremely complex—and I wrote it without knowing if it could ever be performed.

It wasn’t until the brilliant Swiss oboist Martin Bliggenstorfer contacted me out of nowhere in 2011, inquiring about the score, that the premiere ultimately took place in Amsterdam. Having found a collaborator not only willing to perfect the smallest details of the score, but who shared my passion for rare instruments—we began collaborating on an ongoing basis together with ensemble proton bern, the contemporary music group Martin co-founded. This has so far resulted in pieces like Vérifications (2012) for six instruments, and more recently, Trio (2015) for oboe d’amore, viola and harp. The logical next step was to record a CD together.

After years of work, hundreds of hours of rehearsals, and, of course, thousands of phone calls and emails, Proton is finally heading to Radio France in Paris to record eight of my pieces in spring/summer 2015. Having rehearsed intensively with Proton over the past few years, these recordings will be absolutely authoritative, with great attention to detail, each score a showcase for the abilities of some of the most talented and committed performers in Europe.

It’s been a long journey to get the project this far, but we’re not all the way there yet. The project is approximately 60% funded, which has allowed us to record the pieces, but there are still many basic expenses to meet in order for the disc to be released.

Here's what your help will allow us to cover:

You can help us bring this extraordinary project to fruition, so that after 10 years, these pieces can finally be heard by a wider audience.

The above, plus a copy of the CD (international shipping included)

The above, plus a thank-you credit in the CD booklet

The above, and I will write out a manuscript page of the score for you