Support an exhibition by young artists and curators! 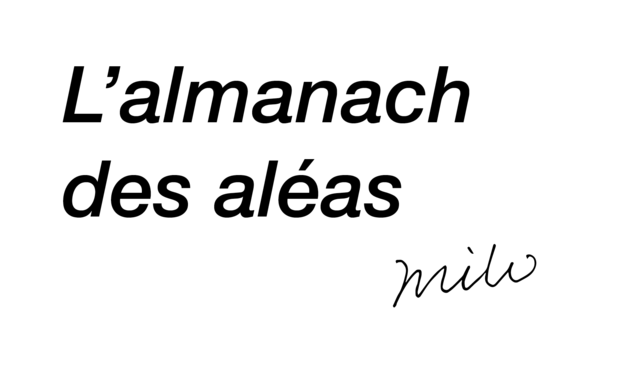 Exhibition « The Almanac of Uncertainties »

By the association milo

Graphic design for the catalog

A proposal by milo

Milo is an association of 12 young independent and international curators (from Brazil, China, France, Italy, Mexico, and the United States) based in Paris. The curators work to engage in supporting the links between contemporary art and its public through developing spaces for exchange conducive to the diffusion and mediation of art and contemporary creation.

milo is currently developing on an exhibition in collaboration with the École nationale supérieure des beaux-arts of Lyon that will take place in Paris from July 8 – 13, 2019.

The curatorial statement has developed across several encounters and exchanges between the artist and the curators.

The twelve artists united in this exhibition will present works that articulate themselves in a contemporary plurality. The works on display explore both the ordinary as well as its transformation. Although certain pieces will occupy the space physically throughout the duration of the exhibition, others will come to activate it, marking their singular temporalities (performances, concerts, conversations, lectures, instants of confrontation, moments of reflection as well as celebration). The ensemble will interrupt the tranquility of the space as an intensification of the experience together.

The exhibition will be accompanied by a catalogue realized in collaboration with the graphic design students at the ENSBA Lyon.

As a result of a three-way collaboration between artist, curator, and graphic designer, the catalogue was envisioned as not only a didactic space, but one that involves artistic interventions specific to the object itself: the reader will discover in its pages an in situ work by artist Maïté Marra. This editorial object proposes a variety of content (texts by the curators, artistic interventions, iconographic works) and functions as an extension of the exhibition. Its singular form and system of navigation disrupts our normal reading habits.

This project is a result of the research program "Artist and curator," a partnership between Sorbonne Université and the École nationale supérieure des beaux-arts of Lyon. The first exposition realized on the occasion of this collaboration, Partout, mais pas pour très longtemps, was, was organized by the collective Convoi exceptionnel in Lyon, July 2018.

We would like to thank all of the supporters of this project:

The amount collected will directly support the participating artists. We would like to raise 150 euros for each artist to cover production fees.

If the money collected exceeds this amount, the difference will be distributed equally and given to the artists collected.

The association milo will receive the money raised in its entirety to be distrubted to the artists.

In order to offer the best working conditions to the artists, we invite you to participate with a donation.

We are counting on you!

milo: your name mentioned on milo's website + the exhibition poster

milomilomilo: your name mentioned on milo's website + the exhibition poster + a surprise milo totebag (with a notebook and coasters) + the catalogue