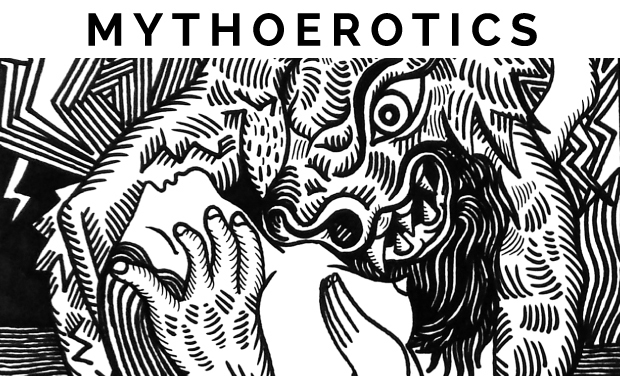 Free and trapped, hunting and hunted, important and obsolete, we explore the superficiality of sexual representation and the depth of myths, a figuration of our own private or universal mythology.

The result is a monumental 70 meter black and white fresco, expressed both lyrically and poetically as a fragile, perennial transcript of love.

Instead of a traditional in situ fresco, we chose to produce our artwork as a limited edition wallpaper. We want to give our audience the opportunity to purchase any segment of this story, in the dimensions that they choose.

With your help, our wallpaper, the preparatory drawings and the original artworks will be exhibited at Boite Noire Gallery in Los Angeles will be unveiled on January 27, 2017 as a featured exhibition at the designLAb at the Pacific Design Center.

Theodore was born in Boston, USA, from Greek parents, both biologists.  He moved to Paris at an early age and grew-up between France, Greece and England.  He studied piano before attaining a law degree at Sorbonne University while concurrently studying sculpture at the National School of Fine Arts in Paris.

Despite virtuosity and critical acclaim in large ink drawings and wooden figures, Theodore continuously renews his work, evidencing the plurality of the Artist and the multifaceted layers and depth of his artistic expression manifesting through video art, installations, objects, street art, political and poetic posters.

Diane is a Parisian graphic designer and art director. After studying modern literature, she studied graphic design and art history at l’École Nationale Supérieure des Arts Décoratifs in Paris. She then graduated with a Master’s Degree in Communication at Sciences Po, Paris, where she was able to enhance her understanding of the marketing and communication issues of the brands she was designing.

Over the past ten years, she has worked for prestigious design and advertising agencies, such as Agence Pierre Katz, H5, Publicis, Auditoire, Obo Global&Project, Hub-ID&Design, Posternak & Margerit. She has specialized in the identity of luxury brands, among her clients are Hermès, Ruinart, Azzedine Alaïa, Dior, L’Oréal, and others. Diane has worked in various creative fields, from print and web design, to scenography and directing video clips, as well as photography and writing.

More recently, she has been working on expressing, through her drawings, the unspeakable emotions and invisible threads that attach one to one’s self and to others.

This crowdfunding is meant to finance :

- the purchase of paper and quality ink for our original drawings : 8%

- the printing of our lithographies presented in the exhibition : 7%

- the edition of the exhibition book : 7%

- the launch of the production of our wallpaper : 35%

• Become a member of the MythoErotics community. • Receive, as a screen wallpaper, your name illustrated by Diane & Theodore.

• Receive 3 illustrated and signed cards of our drawings.

• Receive the exhibition poster (A1 format) • A discount of 10% on the purchase of our wallpaper MythoErotics.

• Receive our wallpaper MythoErotics at the launching price of 25€ by square meter. Contact us by email to customize your order.

• Receive the exhibition book signed by the artists, including the whole fresco and all the original drawings.

• Receive a limited edition (1/10) of one of the exhibition lithographies, signed by the artists. Contact us by email to chose your artwork.

• Receive a gift box including : • the exhibition book signed by the artists • 3 illustrated and signed cards of our drawings • 1 limited edition (1/10) square lithography • a coupon for 6 meters square of our wallpaper MythoErotics.

• Chose and receive by mail one of the original drawings (A3 format) presented in the exposition. Catalogue available on demand.