Not ONE clip. Two. For two songs as different as complementary : Spotlight and Fantastic. A young electro duo like not other : FAITH. A collaboration with an international talented singer : MaiLiT. We need you to make a video which take you the retina off !! In the best american tradition (dancers, beautiful light direction, water, fire, painting and pretty girls no to waste anything ;) ) Something very rare in France... 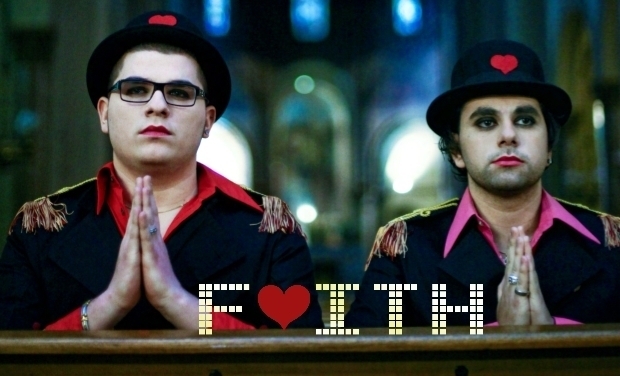 Want to bet on a project with international potential ?!? Do it here with the next two clips of the electro band FAITH !

Firstly, Faith is composed on two French cousins, Sacha and David, a pair of DJ of hardly 20 years. Sacha the inventive, solitary, who creates the Faith's first original melodies at home with synthesizers. And David, the duo leader. His franc to speak and his energy allows him to collaborate with international voices to give touch on their electro composition. Their virtual meeting with the German singer MaiLiT is going to follow up the most rich and creative experience. Now, it’s time to meet in real life through the shooting of the clip of «Spotlight» and «Fantastic» .

And How not to talk about this look so special?

Faith has decided to shake up habitudes and bring some freshness through an original look : a cross between two bullfighters and two military officer, with a derby hat they have borrowed from Dupont & Dupond. A red heart in the center of their hats, as the nose on the face.

With over 3000 fans on Facebook and more than 18 000 views of thier previous clip ‘My Friends Are Famous», Faith is ready to ignite the dance floors with their two new productions extremely efficient.

Of course, it’s far too early to reveal it, but any contributor may have it before others...

We chose to make two clips, because the two tracks are complementary. Fantastic would be the day, and Spotlight the night... We could describe Fantastic as an electro/rap track conveying a strong imagination, with a catchy chorus, supported by MaiLiT’s voice : their gifted singer.

For Spotlight, Faith has rolled out the heavy artillery with an electro/dance track with a highly polished production as a David Guetta song (with the freshness of MaiLiT’s voice and more). Spotlight has the potential to make oneself known in clubs and make you spend a few sleepless nights...

Obviously, shooting two clips at the same time, reduces costs and allows us to work with the same team in order to maintain consistency.

Time to get serious ... Here is the pitch of the two clips :

This is Valentine's Day.

MaiLiT is home, with some mates. There is a full ashtray, empty beer and soda cans on the living room coffee table. The group of friend play video games as retarded teenagers.

Suddenly, MaiLiT's girlfriend arrived in the apartement and discover the scene. She expresses displeasure and walks away.

MaiLiT run after his girlfriend. He must be forgiven.

After his heart regained, MaiLiT become a magician and stops time...

EXTRACT FROM THE STORYBOARD :

MaiLiT when he comes into the nightclub

MaiLiT in the club, with some special effects...

With big ambitions, both clips are expensive.

Bring the singer from Berlin to Paris for the shooting. Pay the hotel. (300e)

Rent a Steadicam for fluid travelling shots and the RED ONE camera : a premium cinema camera (700e)

Your name in the acknowledgments of the clip (this is a clip so no end credits, just your name!)

The pictures of the shooting + earlier counterparts

Unreleased songs, demos or remixes : just for you ! + earlier counterparts

Watch the video shoot : a mega-party in a warehouse, you could be extra ;) an extraordinary opportunity to see the shooting of a party and take part in a unique party that only exists for the time of the shooting + earlier counterparts

The production file signed by the director + earlier counterparts

Faith live in your living room ! (Paris, date to be fixed at your convenience ;)) + earlier counterparts

Enjoy an evening with Faith on the other side of the fence : be with them behind the turntables during a set! + earlier counterparts

A custom track (with the names of your choice) produced by FAITH and sung by MaiLiT. + earlier counterparts

You are the co-producer of the clip: keep an eye on the artistic direction (and heated discussions with the director in perspective !) + earlier counterparts.