Finka Pe - A Community Center inside the Ghetto

Help our community center become self sustainable, so we can keep giving children and teenagers in risk a chance for a peacefull future! 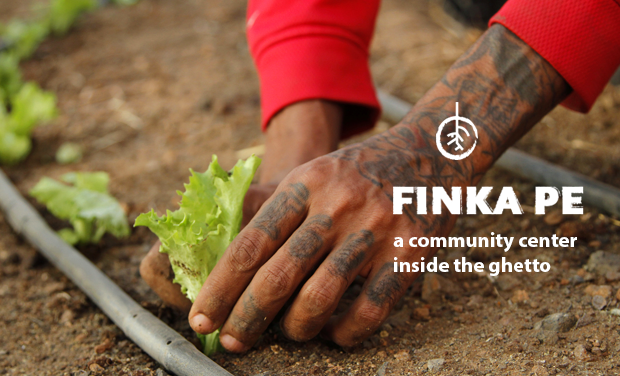 Finka Pe - A Community Center inside the Ghetto

A GROUP OF DREAMERS WITH FEET ON THE GROUND

Finka Pe means "stamp your foot!" in Kriol, the language of Cabo Verde. It is a movement of spiritual independence and taking responsibility over your life. We are here to give hope to the next generation of our community, and here is our story >>>

Our story begins in Praia, the capital, and the most inhabited city of Cabo Verde.  Cabo Verde is an African country consisting of 10 islands, located 500km off the north part of the West African shore.

The country's population is about 1 million inhabitants out of which more than half are living in diaspora! 60% of the population is below the age of 24, which makes it a very young nation. The unemployment rate is very high, especially among young people, and the country is highly dependent on foreign support. Extreme urban poverty has been quickly rising in the last decade while 20% of the population has to survive on less than 1$ USD a day!

These statistics and a strong cultural influence of many deported former prisoners from the US have induced one of the world’s largest drug traffic (America<>Africa<>Europe) and the ongrowing phenomena of THUG LIFE.

More and more teenagers are turning to arms, crime, drug abuse and prostitution, in search of a solution to what seems like a hopeless future.

WHAT THE GOVERNMENT IS TRYING TO HIDE

You know that saying: "The first step of solving a problem is admitting that you have one"? Well, the government of Cabo Verde doesn't. The politicians are focusing media attention on economic growth, democracy, technology, tourism, and the beautiful new uniform of the basketball team. When it comes to dealing with the urgent social and environmental problems of this country, they usually tend to look the other way. This tendency has been leading the Cabo Verdian society closer and closer to the huge socio-economical gaps that are experienced in Rio de Janeiro or Mexico city for example.

If the state will not use more resources for educating the youth for basic human values,  and creating a proper social system, in ten years from now, Cabo Verde will find itself in the midst of a civil war.

OUR GOAL - EMPOWER LOCAL YOUTH TO CREATE A BRIGHTER FUTURE

We are a group of young activists and volunteers, local and foreign, that has been working since 2010 to create a solution for these problems, through personal field work. In 2013 we have established  an association named "Pilorinhu".

As part of our activity, we have established a cultural community center, named Pilorinhu in Achada Grande (one of the roughest neighborhoods of Praia).  Many volunteers worked on cleaning and renovating an abandoned space and transformed it into an active educational and recreational center for teenagers and children. The goal was to empower them and create a sense of dignity for the local youth and for the community.

REHABILITATION OF OUR CENTERS

CAPOEIRA CLASS IN OUR CENTER

FINKA PE - THE BIRTH OF ANOTHER DREAM

Following the success of this project, in the beginning of 2015 we've located another abandoned space in Lem Ferreira, another neighborhood of Praia, with a population of approximately 2500 people, including many children and youth in risk. We quickly went into making this space alive! We named the center Finka Pe.

HERE IS AN ARTICLE ABOUT HOW WE STARTED FINKA PE IN "VERSPERS" (it's in dutch, but you can always google translate :)

MAKING THE CHANGE IN FINKA PE

The center is open 7 days a week, morning to night and is already serving basic needs of the community. There is a team of local and foreign volunteers who operate and manage the place. They are always present, and give their time, abilities, and most important; their heart for this cause.

In Finka pe, we have: 1. Library and studying room for children 2. Studio for artisanal and art work 3. Library for youth 4. Kitchen 5. Big open space for activities 6. Garden.

ACTIVITIES AND VOLUNTEERS IN FINKA PE AND PILORINHU

A DIAMOND IN THE MUD

Your donation will enable us to keep operating this center and:

1. Improve our ability to answer the needs of the community of Lem Ferreira.

2. Provide these children with a much better alternative to street life: enhancing their education, involving them in various cultural and social activities, creating a strong social consciousness among them.

These children will eventually lead the change in their communities, and their influence will create a better future not just for themselves but for the whole country.

In reality, the center is constantly struggling to survive as our basic needs (water, food electricity, cleaning, maintenance) are very difficult to obtain.

Our daily water consumption is ~ 150 liters for the children, volunteers, garden and kitchen and from time to time we are left without water in the tap. We also often suffer from electricity breakdowns due to poor installation.

On top of that, we need books, computers, internet, phone calls, transportation, working tools and stationery.

Currently we are relying on a tiny budget from the municipality of Praia, but it is very unstable.

But, we don't ask your support for ongoing purposes.

We want Finka Pe to become a self sustainable center to fund our own projects.

Specifically, we ask your help in raising 4400€  for establishing new sources of ongoing income  :

1. Establishing an Organic Garden and grow food for the place, and providing environmental education for the kids and teenagers.

2. Building a community restaurant that will serve healthy food in affordable prices, and will also be a cultural spot for community events.

3. Building 2 eco-rooms, for social tourism purpose, providing cheap accommodation for travelers who want to get involved in real life of Cabo Verde.

In order to optimize the achievement of these goals we will also need to rehabilitate and renovate our buiding.

YOUR DONATION WILL CONTRIBUTE TO:

For understanding better how our plans are going to be exectuted,

LET’S JUMP TOGETHER OVER THE 100% LINE

2.Installing a stable wifi-network for the children, teenagers and volunteers.

3.Buying machineries  for improving our artisanal atelier , where we create shoes, jewellery, and framed art work among other products.

More places like Finka Pe are needed to strengthen communities in Cabo Verde. Our final goal is to be able to construct a network of community centers.

Other Ways You Can Help

Beyond donations, you are invited to volunteer in one of our centers and take an active part of making this change.

All previous gifts + A video of the kids of Finka Pe singing a personal thank you rhyme with your name, in the laguage of your choise :)

All previous gifts + A pair of handmade sandals made by our atelier team. You can choose the size and the specific design you love

All previous gifts + A 2x2 meters personal street art portrait of you on our hall of fame wall. You send us a funny photo of yourself or someone you love, and we perpetuate it in the streets of lem ferreira :)

All previous gifts + Super special 3 days social tour on the island of Santiago. You get to see the Real deal of the Cabo Verdian society. 1 Night in our center Finka Pe hosted by the community of Lem ferreira, 1 night in the beautiful artistic village of Porto Madeira up in mountains, and 1 night in the tranquil town of Tarrafal on northern beach of Santiago. The trip includes local meals made by us, transportation, and guided tours by our own Finka Pe team. What are you waiting for, drop everything and come to Cabo Verde ;)