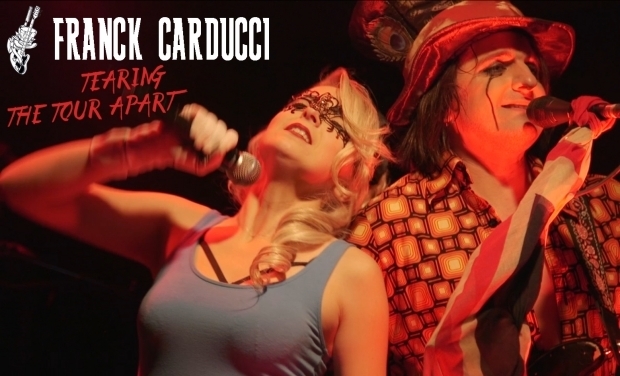 We are entirely indie artists, which means we can only rely on YOUR SUPPORT to produce this Live

... we are infinitely grateful for our help!

Franck Carducci, a multi-instrumentalist (bass, piano, guitar, drums, etc.) rose in a family where music is a way of life. Franck produced his first melody on the keyboard of an organ at age 5. He proceeds to learn the guitar - mastering Chuck Berry's ‘Rock 'n' Roll’ by age 11. At 14, Franck discovers The Beatles and joins his first rock band. Little by little, he strives towards a music that, while still being accessible, is also structurally more complex with different atmospheres. Progressive rock will come to define his passion for a music that's both very rock and very atmospheric or psychedelic. Between the ages of 20 and 30, he played with upwards of 20 different bands, and got involved in the recording of 15 different albums, including 2 with French female folk singer Yanne Matis. In 2008, Franck moves to Amsterdam where he gets into the local scene and performs regularly in the famous clubs of the city. He participates in several bands with styles varying between funk, soul, pop and rock music.

Then in 2010, a dream comes true: Franck opens a gig for one of his heroes, Steve Hackett (Genesis). This experience will convince Franck to focus on producing his own solo album. The goal was to produce a genuine album , of his own, without concessions but being sincere. And there was ODDITY.

This debut album was widely acclaimed by the specialists of the genre, as well as a lovely discovery for the neophytes. It allowed Franck, backed-up by a passionate and professional band to tour throughout Europe. The success of ODDITY and the ODDITY-TOUR naturally led Franck to release a second album – TORN APART

This tour will take them throughout France, England, The netherlands, Belgium, German, Italy, Estonia and even to Guyana.

A sound and video recording was made on Novembre 20 and 21 2015 at Climax-Club-Legend featuring that night Jimmy Pallagrosi (Karnataka) as special guest.

With his band, Franck puts on a trip through time and eras Dive down into it, let yourself go, you're off for a journey in an enchanting and eerie musical universe. A place where dreams are kings and emotions are queens!

... we are forever grateful for your support!

(all tshirts packages will be able to choose the design)

1 T-shirt designed by CASOLI in your mail box (incl. shipping)

Live DVD in your mailbox (incl. shipping) + our caricature within the world ofFC Band in digital HD drawn by Casoli

Live DVD in your mailbox (incl. shipping) + the Alice masque worn by Mary Reynaud during the 1st leg of the tour