FRANCOIS NASICA: PAINTING THE PATH, a film that explores a work in progress, which in it's singular force imposed and compelled me to it. 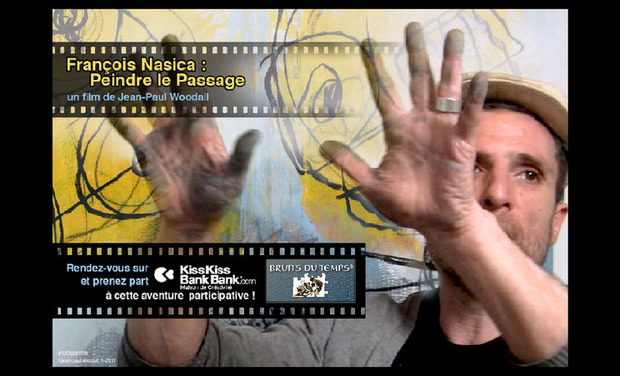 “I do not paint the being, I paint the passing.” Michel de Montaigne, Essays.

I encountered the painting of François Nasica in December 2010 during an exhibition at the artist collective Le Pigeonnier where he had set up his workshop since February 2009. His work immediately caught my attention. I left a few days before visiting him again. I wanted to be certain that I was not being prematurely enthusiastic. But my initial belief that there was a special creative energy was, to the contrary nevertheless enhanced. It was then that the desire in me arose to make a film about his work.

He met my proposal with favourable response and preparations to commence filming began. I wanted therefore to equip myself with a crane and a stabilizing shots system (steadicam). Not having sufficient financial means with my society Bruits du Temps, I decided myself to design and undertake the machinery, using and transforming recycled materials. I set up my workshop in the garage of a friend and prepared to work as soon as I had a little free time. The lighting and accessories had to be acquired. In March 2011 I was finally ready to start shooting.

One of my friends, Thierry Chabaud, very knowledgeable about cinema and having the same camera as my own, joined the team in order to enrich the angles of shots. For outdoor scenes, my son Samuel was the soundman. At the Sens Intérieur gallery in Cogolin, in his studio work, in his search for painting supports I accompanied the painter. The eye of the camera follows the painter in the execution of several drawings and paintings. I found it fascinating to witness the genesis of a work in progress and to see how the hand creates a unique inspiration out of the space of nothing.

This film will be accompanied by informal discussions on the art of painting with friends of mine he encountered, Chicco Beiso (a painter), Claude Fournet (poet, novelist and art critic, who has managed the museums of Nice from 1975 to 1997, and created the MAMAC Nice modern art museum) as well as Thierry Chabaud. The dancer Abdeslam Michel Raji makes a singular occurrence.

“As for my style, for my vision of the cinema, Orson Welles wrote, editing is not simply one aspect; it's the aspect.”

The work of editing this particular project could not begin until the last week of August 2012. It was necessary to make time to mount 14 hours of footage as well as 250 photographs. Much time! Already more than 500 hours of editing were devoted to this project, ending in a final duration of 50 minutes.

The soundtrack is an original creation of Samuel Woodall. This is a work in progress.

We would like to support this documentary by giving it every opportunity to circulate, mainly through the festivals of short film, and to give the work of François Nasica the visibility it deserves. This is the purpose and meaning of this project. For that reason, we consider the issue of a DVD subtitled in English, Spanish, Italian and possibly Portuguese as well as other languages, presented in Digipack slipcase and accompanied by a booklet of twenty pages in colour.

About the work of François Nasica

“Writing is not describing. Painting is not depicting. The likelihood is none but window dressing.” Georges Braque

The subjects of paintings by François Nasica are rhythms, in the search for traces of the universal. Traces for reinventing, exploring the unknown of rhythm, — and as he says himself: “I do not try to represent the flesh for the flesh, it does not interest me. I want to express its essence, its essential, its life, its upheavals; its rhythm. The rhythm of an arm, a hand, an eye, a face, a breast, of a sex (...)” The rhythm is the invisible in the visible as the tip of the iceberg. His painting solicits our imagination making us thereby interact.

A painting is not limited to subjects or themes; it must go beyond the idea. Is main importance is the vision, a vision that is the gesture of what the painter integrates and leads instinctively, in spite of himself. How his perspective is on reality, with it’s maximum subjectivity, is transmitted to our eyes, and acts inside us and to us, which is the mystery.

There is this strong inner necessity that governs his work and which distinguishes him from a simple ornamental painter, or who is capturing his own tune with the times. No opportunism in his manner. Nor complacency. Rather the inclusion of his own historicity in the act of painting, of drawing. Beyond questioning the human condition, with its share of absurd suffering — individual and collective, inflicted, experienced or observed, — there is an obvious joy, full of gravity. A prophylactic laugh, like a cure for despair. The expression of a challenge against fate. I recognize this force always shifting, and close to that, it seems to me, of Joan Miro. In response to a question from the painter Georges Charbonnier, in 1951: “How can you conquer this optimism?” he replied: “ In making fun of my characters. In making fun of humankind, this puppet, which cannot be taken seriously.” (1)

What touched me more than anything and drew me towards the works of François Nasica was to feel how they escape any intent and premeditation. Which is the first condition to get to the unknown, with its own autonomy. He seeks while making, the intuition preceding reflection, and what he finds then is transient. That’s why he invents himself as he creates, in a constant dialogue, a fraternal confrontation with the manifestation of pictorial expression born in the mists of time. His work highlights the timeliness of the parietal art, which led him to his commitment to painting. Indeed, at the age of height years, an uncle gave him Four hundred centuries of parietal Art (2) from Henri Breuil, who instructed his early vocation. It is in the strength and the evidence of these figured traces that show the continuity with the men who expressed themselves on cave walls. There are also several active sources in his work, relays of energy that relate to the primitive arts, up to Picasso, Giacometti, Miro, Basquiat, Tapies or Apel.

It is this freedom conquered, irreducible to programmatic, “ready-to-paint”, fickle temperature of the art markets. To meet the expectations of an audience is often to replicate the conventional taste of one's time period, which changes as quickly as modes pass. Hence his challenging path in seeking an increasingly pointed questioning, consciously stimulating every step towards a quest whose unknown goal can allow him to reveal his own way forward.

Thank you to Zela Terry for here help in the translation.

François Nasica, elements of a course

Fieldwork and exhibition throughout Italy “Moving on to Art”, in collaboration with the city of Nice, France

1997 to 2006   François Nasica devoted himself entirely to music and the scene as a pianist in several groups and participates in many parts of the first concerts include: The Skatalites, Israel Vibration, The Gladiators, The Hepcat, Massilia Sound System, Gnawa diffusion, The Scofflaws, LKJ, Macka B, New York Ska Jazz Ensemble, Western Specials, Aspo, M'Panada, Open season, Che sudaka etc.. He also turns to the composition. His song Mr. Chet gets in 2003 the Prize “Music Online” of Adami

2007    Definitive coming back to the painting

2010    Gallery Space for Sale, 150 years of the annexation of Nice to France Performance at the Nice Jazz Festival, France

Why do we need you and at what will serve the collection?

The funds will be devoted to the completion of the film and DVD creation, to offset a portion of the expenses for material needs and the remuneration of the various stakeholders.

1/ Making a digipack DVD packaging and booklet in 1000 copies

2/ Packaging for postal invoices + postage for mailings. Including sending to the press and in the festivals of the art-house movie

3/ Compensation transcribing the discussions for subtitling, translation and integration of the subtitles in Italian, Spanish, English and possibly, depending on budget, Portuguese and Chinese

4/ Compensation of the sound designer for the original soundtrack, of the sound engineer and the technician second camera for five half-days

5/ Purchase of equipment for the manufacture of machinery, lighting, drives and subtitling software as well as equipment for prints, drawings, paintings and prints photos to subscribers

Although collection is successful, it will remain open. Additional contributions will allow us to add other languages.