A short film inspired by balinese legends, about a lonely man helplessly looking for love, until one day he finds a strange bag of seeds... 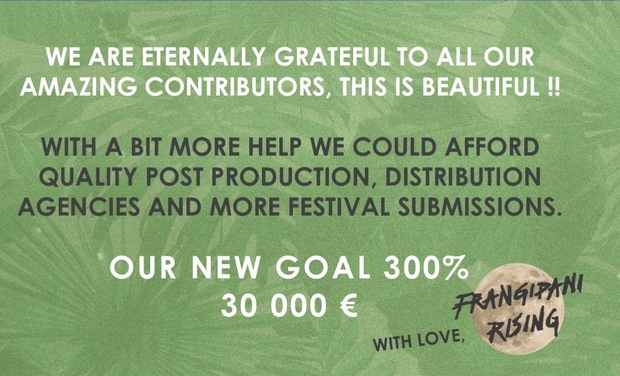 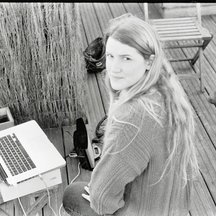 LADIES AND GENTLEMEN, A WORD FROM OUR CAST !!

Frangipani Rising is a modern fairy tale set on a beautiful island where the moon and nature seem to have a strange power over the inhabitants. Nyoman, our hero, is the loneliest person he knows and has given up on the idea of ever finding love. Not even the moonlit escapades with his friends, nor the beauty that surrounds him can seem to lift his spirits.

Until one night, pushed by despair, he curses at the moon and blames her for his fate. The next morning, Nyoman discovers his house has been shaken by an earthquake, and something unthinkable has grown in his garden…

In our story, the island and the moon are characters of their own. It’s a magical place where nature governs over people and influences their everyday life. Since the oldest times, the Balinese have looked up to the sky in search of answers to age-old philosophical questions.

The Moon has an important role in balinese culture, from being the basis of the calendar to guiding people’s behaviors. The cycle of the moon represents the cycle of light and dark inherent in humans. The moon serves as a reminder to remain vigilant of ourselves and our surroundings…

Ario is a remarkable Indonesian actor. From the Globe Theatre in London where he mastered his acting craft, to portraying Indonesia's first president Soekarno in a highly applauded film of its same name, Ario has starred in acclaimed independent films as well as immense blockbusters in Indonesia and around the world. He is one of the most passionate and talented actor we've ever worked with and we are extremely grateful that he will be our hero, "Nyoman".

Valentine is a sublime french rising star. She just completed shooting her first feature film as the lead role. Not only she is fluent in French, English and Indonesian, she is a chameleon in her game, surprising you each new time you see her on screen. She's a very sensitive and absolutely brilliant actress, with the fierce and ideal energy to play the role of THE GIRL, a magical and earthly being that will turn Nyoman's life upside down.

Rio is a remarkable and charismatic Indonesian actor and producer; him and Ario have already shared the screen on the film JAVA HEAT. Not only has he accumulated countless awards, he is also one of the dearest actors in the heart of Indonesians. Rio just finished shooting Amir Pohan's film CINTA ITU BANGSAT, and had the lead role in the FIRST Indonesian film shot in Iceland!  We can't wait to work with him.

Widika is a talented Indonesian and Alaskan upcoming actress.  She's travelled the world as a model and TV travel show presenter, she's climbed every volcano and swam every sea. And she's making a remarkable debut on the big screen.

Chicco is an accomplished and widely known half Thai and half Indonesian actor and producer.He began acting in famous television shows in Indonesia and carried on a prolific career in film, starring in popular movies loved by all.We are one fortunate crew to have such a fantastic entertainer and terrific person join the team.

Aimee is a gifted jazz musician as well as an actress for film, television and theater. Graduated from the New York University, she illuminated the Off Broadway stages and traveled the world making music. Now back in Indonesia, she still sings and acts. We are so lucky to call upon her skills in FRANGIPANI RISING.

Andrea was born in Spain and grew up between Europe and America in a multi cultural family of artists. She is a relentless cinema lover and has been working as a photographer and an assistant director all over the world. After spending most of her time on movie and television sets, she acquired advanced skills in the fields of cinematography, (shooting documentaries) and editing, and masters all aspects of filmmaking from pre production (story development, casting, establishing a realistic work plan, scouting..) to the shoot itself (directing actors, visual storytelling..) Other than her technical skills, she had the chance to always find herself surrounded by film professionals she admires. Every experience on a film set has become a pleasure she can't live without.

Elsa was born in France but has lived most of her life as a nomad around the globe, giving her the unique opportunity of immersing herself in different cultures like few can. She is a competent Assistant Director and a fervent film viewer, with a thoughtful and subtle analysis of storytelling. Elsa has been working on spectacular blockbusters like Dunkirk and Mission Impossible, to praised indie movies. Indonesia being her second home, she is the perfect match for FRANGIPANI RISING.

Baby was born in Sumatra, western Indonesia. She started as an Art department coordinator and is now working as Production Manager all over South East Asia.  And she's the boss.

Amir is half Indonesian and half Deutsch, he’s an award-winning documentary and film director. He’s also a camera wizard and an total film nerd. Oh, and Amir just made the first Indonesian film ever shot in Iceland!

Bani is from a Javanese village called Solo. He’s a talented filmmaker and sound mixer. He’s also the funniest person of our crew, and probably Indonesia.

Samuel is French but grew up in Bali and is fluent in five languages. He just graduated from a Marketing and Management school and is joining the team as an intern to secure his diploma! He looks older in person...

I have loved movies and worked in film since a very young age, and for the first time in my life, I have the opportunity to make my own. I’m still overwhelmed.  Films have the ability to make me feel better, instantly. I have always been amazed by the venture that is making a movie : all the extraordinary people that come together, give their time, their effort and their passion to bring a story that was once on paper, into celluloid and finally to the screen. And in this particular case, also bringing different cultures from different backgrounds together, all pushing in the same direction towards the same goal. I am fascinated by how what starts as a simple thought in someone’s head, can become a work of art that can move the spirits of thousands... It is truly a beautiful thing. To have the chance to direct my own idea, to be on a set, with actors and equipment and a professional team, fills me with joy and love for the profession I chose. If I am able to bring you, during the time of this short film, some of the feelings I have when I watch a movie I love, I would have accomplished my biggest dream.

FRANGIPANI RISING is a film I simply cannot wait to make, to see, and to show you. I love the story and the characters and the setting. I love that it’s a magical story, and I love that it gives hope.

I am so thankful for your trust, for your support that is ACTUALLY MAKING this movie, and I hope with all my heart, that I will be able to make you proud.

Let us explain exactly how your contribution will be used

HELP US FINISH THE MOVIE€

In order to finish the movie in post-production, adding color correction, texture, visual effects, and hiring the technicians capable to do so we would need to reach our higher goal.

- We could afford a CAMERA CRANE and DOLLY TRACKS for our opening sequence and create the magic mood we want for the film.

- The script has a lot of magical elements. To create this we’ll need some very specific equipment and crew like a GREEN SCREEN and a VFX SUPERVISOR

- Pay for an extra day of shoot in a STUDIO to bring you a very very special scene...!

- We could afford to create ORIGINAL MUSIC, collaborating with amazing musicians from Indonesia and all over the world.

- Finally, we could afford to go into POST PRODUCTION with an experienced editor, achieve color correction, create subtitles, sound mixing, and design our much needed VISUAL EFFECTS

- Last but not least, so the film can LIVE after it's completion we would need to invest in MARKETING TOOLS such as posters, flyers, press, screenings and interviews; and submit it to FILM FESTIVALS around the world.

Because of our actors availabilities and the important fact that we need to shoot on MAY'S FULL MOON, which means very soon, we must have everything ready by then.

We take our obligation to our backers to be financially accountable very seriously.  So we like keeping donors updated of where your money goes.  We value the fact that YOU make this all possible!

. Our endless gratitude + A HIGH RESOLUTION STILL FROM THE FILM TO DOWNLOAD

. Our endless gratitude + A High Resolution Still from the film to download + A DOWNLOAD OF THE SCRIPT SIGNED BY THE CAST AND DIRECTOR

. Our endless gratitude + A High Resolution Still from the film to download + A Download of the Script signed by the Cast and Director + A HIGH RESOLUTION DOWNLOAD OF THE FILM