Help I to finance my first clip!!! I matter on you to give me a small help! 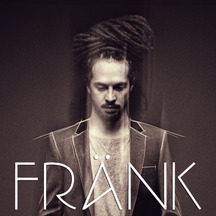 My name is Fränk. I'm a self-taught singer, composer and writer. My music blends folk, soul and blues with a hint of dreamy urban pop.

For the past few years, my main inspirations have been Jimmy Hendrix, Ben Harper and the few trips I've made across Oceania, Australia and the Fiji islands.

Back in France, I was fortunate to meet several talented artists who helped me grow my repertoire and continued to influence my style. These include Hugh Coltman, Spleen, Ben Mazué and Namasté.

From these encounters was born my first EP, "Dans la Tête" ("Through  The Mind") which was released last April. It's a lively and colorful collect of contagious melodies and generous grooves that I wrote as a hymn to the trips I took.

To bring this EP to life, I was fortunate to work with several talented musicians. The song's arrangements were crafted by Kenzo Zurzolo (he's main keyboard player of Namasté and has worked with several other artists including Alex Hepburn). We also partnered with Martin Toloton (the founder of Moonkeys Music) to produce the record. I also worked with Lenny Mathé, a rapper and graphic artist who has been a mainstay of the underground scene in Paris for several years. Together, we wrote the French version of 'Down', a song which will be released as our next single.

Considering the positive feedback we received from fans and radios alike following the release of this French version, we wrote an English version and partnered with Thomas Lavelle to make a music video. this is why I'm asking for your generous help today.

To discover more, you can visit:

We've already started to make the music video but need your help to finish the production. Here's more details on the projects.

Thomas Lavelle, the director, is one of the most talented fashion photographers in France and is making his first steps as a director. He has already worked with numerous artists, musicians, actors, athletes and celebrities including Dita Von Teese, Tomer Sisley, Jackie Chan, Martin Solveig, Gad Elmaleh, Mélanie Thierry and Sebastien Chabal. His pictures have been published in many magazines including Edgar, Revs, Revolution, Ever Magazine, Fiasco, Raise, Moods Magazine, 20 Minutes, etc. He has a great eye for photography and a passion for creating insanely beautiful images.

You can check out his previous work here: www.thomas-lavelle.com

Thomas partnered with "Coeurs et Arts", a team of artists and a production agency. They've worked on and released music videos, photos, graphic designs, and have worked with several top artists such as C2C, BRKFST club, Lilly Wood and the Prick, The Popopopops and Studio 43.

You can check out their work here: www.coeursetarts.com

With such a talented team behind the camera, I can guarantee that the music video will be beautiful and will most probably make you smile and dance until your feet hurt.

So what about the video's storyline? What will you see?

We won't ruin the surprise…but here's a few details:

For this video, we tried to portray the emotions that the song creates. We wanted a video that's fresh, dynamic and authentic. To do so, we selected people in the streets and filmed their reaction to the song in a studio. As the song progresses, the first person gets into the rhythm and stars moving to the melody. He starts dancing and singing, as if he were, in fact, the song's singer. We recreated this experience several times with different people and ultimately end up with a patchwork of diverse human emotions. Our goal is to create a wave of positive energy that will help you, and any other viewer, be enthralled by groove and optimism.

Why do we need funds?

As I mentioned earlier, I already managed to gather some of the funds (3000 euros) needed to produce this video. These helped pay for:

As we were able to film of the clip already, check out this homemade making-off which will help you grasp the song's energy.

However, we're missing 3000 euros to complete our budget, finish the production and release the video. This sum will be mainly used for post-production work which is essential to make the video.

- editing: putting the pieces of the puzzle together (editing all the images together to make cohesive whole)

- treatment: working on the image's colors and tones to create a smooth finish

- web & TV promotion: what good is a music video if nobody sees it!? We'll use part of the funds to push the video to TV channels, social networks and video communities.

As soon as we receive 1500 euros, we'll be able to send you teaser of the video. Get excited!

Moreover, for every donation, you'll receive a bunch of cool perks that we've created just for you. These start with the EP itself to a VIP invitations to my concerts and even a private concert

As this is my first crowd funding campaign, I hope it will be a success. Any amount donated is generous and I couldn't thank you enough. As a matter of fact, if we get 600 people who all chip in 5 euros, we'll get to the target sum in no time…so don't hesitate to share this page on social networks, by email, to your family…even your grand-mother! ; )

Again, thanks so much for helping us make art. Your support matters and can help us bring smiles and positive energy!

If you have any questions, get in touch

Previous contributions+ a meeting during a dinner

Previous contributions+ 1 private gig at your home. No, you do not dream! I would rise even on the table of your lounge!

We go on a journey together, and I pay even plane tickets!