Support and share the Fredo SurfCamp’s adventure. The first sporty and culturel hostel in Guadeloupe. 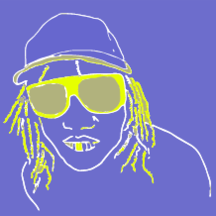 Now to describe the essence of this Surfcamp? This place is so special ... How to tell you its warm atmosphere, the freshness of the exchanges, the smells of Caribbean food, the naps in hammacks lulled by a guessed accordionist, Caribbean color evenings?

I initially wished to introduce you this hostel through the look of his host and then I realized that I could just explain it to you with my own point of view.

So we need introducing.

I have just finished design studies in Quebec. At the first snow of 2016, a huge spleen. I needed some heat.

Quickly I found a plane ticket - really cheap, I became expert in good airplane deal. No point of fall, not a penny in my pocket, I looked for workaways (kind of voluntary).

I had two choices, between going to give a hand in a hostel of surfing or to take care of children: let’s go for the adventure. The choice was soon made: let's face the waves of Guadeloupe and become an innkeeper-graphic designer.

It seems to be the golden plan: I work as a graphic designer, meet people, speak Spanish, sometimes even Polish, have surf classes and live in the tropics.

But after two months here, I realize that I never stop working… Not that Fredo is a tyrant. Do not worry, he’s just the opposite.

The reason for this fury is that I have fallen under the spell of this place, and under the sincere friendship of my host. So since, I help as I can and I do my best to improve this little corner of paradise.

My tasks are diverse in the hostel. I also give a helping hand for the household, and I can be requisitioned for a DIY expedition in my lost hours ... I want to invest myself in this project which I believe in, and I want it to work.

And above all we have total confidence in each other.

Fredo, he is the innkeeper resourceful and passionate.

He gives the impression that he can speak in each mother language of each guest who passes the door. When Miguel arrived, the Spanish reasoned throughout the house, when it was Bernd he tried to speak German. When we received José a Spanish traveler quadrilingual, we were entitled to the Franco-spanico-Portuguese-English. Not to mention the beautiful Belgian accent he tooks to speak with Melanie.

He knew how to receive all of them with curiosity, generosity and especially around a tit punch (which, we are not going to lie, ti punch is a great enhancer of conviviality!).

Also passionate with his first job, surfing, he teaches it with love and pedagogy to his pupils of all ages and levels. You can take surf lessons or rent boards for  a day or half a day.

He is a resourceful person in the recovery and recycling of the materials he uses to "pimp" his SurfCamp. He firmly believes in his ecological values ​​but also to dynamise tourism on the area, by setting a good example.

Fredo, is therefore someone who has ideas full of his head, projects over the arms and a will to any test.

And you see, I think that's why we make a great team. When the idea fuses I catch it, I take the projects in my arms (with my small skills) and with all the good will and energy he transmits to me ; I try to put them into practice.

So, this brings me today: trying to make things happen with your help on KissKiss BankBank

Located at Morne-a-l'eau, in the middle of Grande-Terre, it is equidistant from all surf spots (adapted from beginner to confirmed).

We have six single beds in dormitories, and three private rooms. There is also a little room for us, his volunteers.

Often, all the people that generates, meets in the morning around the cafe or to check  e-mails on the front terrace. In the evening you can enjoy the back covered terrace. Some are preparing the meal in the kitchen it shelters while others are chating in the hamac. But when it’s time for appetizer and games like "Time'up" everyone is settle in the sofas.

You will understand it, here is a small structure friendly, family but also festive.

That is to say, to finish an original creation (all rights reserved) of our host: Jaccuzzi-Boat. (For septic proof photos to support.)

- 250e will be invested in the installation of the pump and the pool lining.

- 50e to the construction of a technical room of recovered materials

And finally 500e will be allocated to the decoration and layout of the pergola as well as electricity (bamboo roof, yes, we build everything ourselves here!)

The rest of the money that you have allowed us to reach, will serve us to finalize works of our new italian style shower. For a maximum comfort and desalination in good shape, we would like to propose a bathroom without the tide that causes 12 daily showers.

With 60e and a little imagination we have the intention of delighting your feet leaving the shower.

The second point of sanitary expenditure will be used to create an outdoor solar shower, ecological and economic.

It absorbs and keeps the heat of the sun: no need for electricity. The accumulated water is heated in one hour .. Well yes, imagine that even in the Caribbean a small warm shower once in a while makes you feel good. Between buying and creating a small intimate space under the stars the budget will rise 300e.

Sports lovers and in order to sharpen our balance, we started in manufacturing slackline support, we only need to have the points of anchorages and of course the slack. This investment is 140e.

(For the uninitiated Slackline or Slack is a discipline of dynamic equilibrium strongly similar to funambulism.)

The rest of the budget will be allocated to the printing and realization of graphic advertising objects to have more visibility in Guadeloupe and anywhere else : website, flyers, business cards, signage.

But also to purchase paint to create murals in facades, and various renovations to make this place visually live up to its magic atmospher.

That's what the 2000e crop is all about. If by chance the pot is reached and even exceeded, we would eventually like to build bungalows to welcome more travelers or create a skate ramp.

This small financial cushion for which we appeal to you, would allow us greatly to advance the work and for certain to sleep on their both ears.