Gaspard, my health ally against the bedsore.

The Gaspard connected carpet wants to be adopted by as many people using wheelchairs as possible! 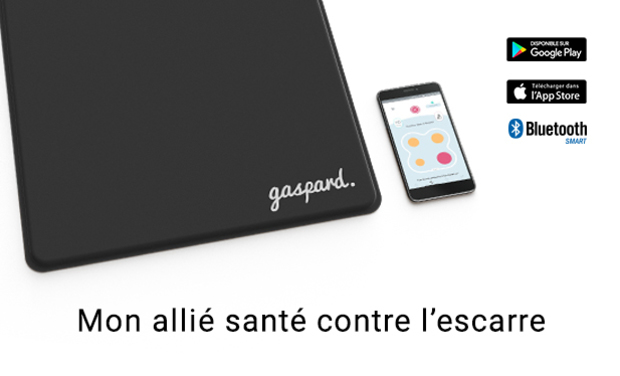 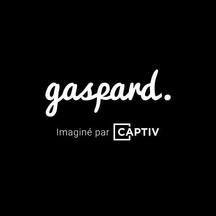 Gaspard, my health ally against the bedsore.

The connected carpet Gaspard wishes to be adopted by the largest amount of people using wheelchair! Share with us this great adventure and help us to start Gaspard's production.

Gaspard is a connected carpet located under the anti-bedsore cushion of a wheelchair. This carpet contains 24 sensors which detect the time spent, the positioning and the inactivity of its user to avoid skin’s problems. This is a real health partner: it is the first device connected to a mobile application via Bluetooth and it looks after users to improve posture and activity on the wheelchair.

Gaspard did not appear as a flashing light above Morgan and Valentin’s heads, both creators of Captiv who created Gaspard. The launch of this project results from the Morgan's personal story.

Morgan became tetraplegic following a tragic sport accident. During his stay at the hospital and when he returned home, he was made aware of the different issues related to the handicap.
Unfortunately, many people having wheelchair forget good practices when leaving the rehabilitation centre, which can lead to dermatological complications.

These facts were the starting point of Gaspard’s idea.

Someone using a wheelchair spends on average 10 to 12 hours sat but cannot know exactly for how long it was. The idea was to integrate a technology under the anti-bedsore cushion in order to prevent the risks of appearance of bedsores.

The positioning on the wheelchair is very important to avoid any kind of inconvenience. Gaspard then helps its user to find the best sitting position himself. It also encourages the user to perform daily exercises. The push-up is one of the first movements learned during rehabilitation training.

It is the fact of getting up and sitting down on the wheelchair. This process allows to relieve the pressures and reposition correctly on wheelchair’s seat.

One week autonomy allows a daily follow-up. The charger only needs few hours (3hours maximum). A multitude of sensors hidden in the carpet allows Gaspard to follow the position on live. A real coach!

The application consists of 4 main features:

- The "Position" function indicates in real time to its user the status of its positioning. The different sensors detect the pressure points. If a pressure point is too important, Gaspard encourages its user to change its position in the warning via notifications on the smartphone. It helps to find an ideal position in a didactic and visual way.

- The "Push-up" function encourages the user to exercise by performing push-up movements day after day. The push-up is standing up and sitting down in your wheelchair. This is an exercise well known to users. The goal is to make sure the blood is circulating and reposition itself.

- The "Time spent" function allows the user to know how long he has been in his wheelchair. He can then know his periods of activity. This function also makes it possible to follow the activity performed.

Little anecdote: Morgan being a great sportsman, he wore a connected watch on his wrist. He would receive notifications about the number of steps he took during the day, 3,000 steps on average ... while he was traveling in a wheelchair. Ironic no?

- The "Statistics" function summarizes the activity in order to improve its monitoring over the time. All information is recorded, saved and analysed. These data are available on the app for the wheelchair user or caregiver. The data can be also downloaded, ideal for preparing an appointment with the doctor.

Moreover, the application is 100% adapted to each user, so it can be set onto everybody’s goals.

Gaspard is a health partner which follows and prevents dermatological problems. Every day he motivates, encourages and congratulates when the targets are reached.

Gaspard is supported by various partners including rehabilitation specialists and also doctors and health engineers.

To approve the Gaspard carpet technology and the application, we are currently producing two thesis. The first one with the rehabilitation centre of Limoges performed by a student in the final year of medicine and will be published in June 2018. The second one is made by a nurse specialised in wounds and blood circulation in corporation with the Kerpape rehabilitation centre. These thesis are an official and real way to design Gaspard as a medical devise.

The project went through many steps before arriving at this very last phase, the beginning of the production.

We participated in the 2017 CES exhibition in Las Vegas, following that we won the Start-Up and Handicap prize. This prize allows us a partnership with the rehabilitation centre of Kerpape in Lorient. The doctors and health engineers who are there to advise us and guide us and help us to design the carpet sensors.

Gaspard has also been tested by many people in wheelchairs for several weeks. We were able to control the carpet, the technology and the ergonomics of the mobile application. This test period allows us to make the latest sensitivity adjustments and further improvement on the mobile app speed.

Those thanked for their support ...

The story of Captiv began in a meeting between Valentin and Morgan. They became friends as time went on, and during their sports events. A friendship story of 10 years. They were both managers of independent structures. Valentin acting as an independent mobile application developer, and Morgan as a real estate business negotiator. In 2012 they decided to raise a business called Captiv together.

Then the activity went from a sports events to the connected objects in 2015 following Morgan’s accident in 2013. Obvioulsy, as a result of the accident Morgan wasn’t any longer able to practise sports. Valentin and Morgan then joined their skills, commercials for Morgan, technicals for Valentin, to get started in the sector of connected objects.

The Sensors' tablecloth is available for many sizes and is compatible with the majority of wheelchairs. The dimensions are 40/40 cm, accessible for wheelchairs of sizes between 40-40 cm and 50-50cm. It does not disturb the wheelchair.

It follows the user daily, wherever you use your wheelchair, thanks to its autonomy of one week. This tablecloth is made with 24 sensors that can detect inactivity or bad positioning and alert the user on his smartphone. This application also shows the time spent in the wheelchair, analysed and supplies statistics and contributes to the monitoring (to the follow-up) of movements and position.

Gaspard is the connected carpet that slides under the anti-bedsore cushion of a wheelchair. It adapts to 80% of the French wheelchairs (40x40 to 50x50). It responds to dermatological problems related to inactivity or bad positioning in the wheelchair. These problems affect over 300,000 people each year, a cost of 3.35 billion euros for French NHS. Gaspard is connected via Bluetooth to an esay and didactic application. Thanks to its various features, it allows you to follow you daily by motivating you to move and alert you on your smartphone in case of problems. Gaspard is therefore a real prevention tool. It only requires charging once a week and to be connected to the smartphone via your Bluetooth.

If the first target is reached, 150 Gaspard will be produced to end up in the hands of its users. The production of Gaspard is for us a step which makes the daily life of wheelchair’s users better. This is our minimal target to achieve for Gaspard to start.

Once this target is reached, 250 Gaspard will be available and thanks to you, Captiv will be able to develop the application by adding functions so it will correspond to the expectations of each different user.

After our first version of Gaspard, the feedback from our users will help us to move forward and meet their needs. They are part of our team and it is thanks to them that we can improve our Gaspard application.

At this point, 350 Gaspard will be produced!

On the top of adding functions to the application, why not have it on the wrist? Gaspard is planning to develop the app for connected watches. Romain and Alain will develop Gaspard’s application dedicated to the Apple Watch, Dann and Valentin will them develop the app for Android Wear. The app connected to watches promises easier and faster use. The main interest is to receive Gaspard notifications directly on the watch!

Beyond our expectations! In addition to producing 450 Gaspard, Captiv team is committed to produce a second version of the Gaspard application. It is considering opinions of our users and with  Research & Development that we will make Gaspard more useful, more efficient and even more adapted to the needs of our users.

In addition to that, Captiv will lead ambitious collaborations to develop Gaspard!

We allow ourselves a little bit of madness by imagining reaching €100 000. But with such a sum, we would be proud to be able to start the process so that Gaspard could be partially paid back. Social security coverage requires many steps and Gaspard would then be more accessible for our users.

We allow ourselves a little bit of madness by imagining reaching €100 000. But with such a sum, we would be proud to be able to start the process so that Gaspard could be partially paid back. Social security coverage requires many steps and Gaspard would then be more accessible for our users.

We guarantee delivery on the last quarter of 2018 for a limited quantity of products (approximately 200 units). However, Gaspard's attractive price requires a 3 months delivery lead time after the end of the crowdfunding. Yes, Gaspard is priced at €275 instead of €400 if it was in a standard distribution process

We trust you to support us and all our team hopes that you will fancy Gaspard with its great application!

A big thank you to you for your support but not only... You'll get your name on Gaspard's website.

In addition to your name written on our website, wear your Gaspard T-shirt and cap.

In addition to your name written on our website, wear your Gaspard T-shirt and cap. But it is not finished! Our friend Charly offers you a solar battery to always have enough to charge his phone!!

Receive Hector, Gaspard's big brother, a thank-you card and an invitation to meet us at an event… As a bonus, a T-shirt, a Gaspard cap and Charly offers you a solar battery!

A Gaspard connected carpet at a trade price! Enjoy it! Gaspard is at €275 instead of €400 during the all-time of the crowdfunding campaign. A big thank you to you!

Make a donation to a stranger who needs Gaspard! Enjoy it! Gaspard is at €275 instead of €400 during the whole crowdfunding campaign. Thank you for your generosity and your sense of sharing!

One Gaspard is not enough! Get your pack of 2 Gaspard connected carpets. A huge thank you to you!

Get your pack of 5 Gaspard connected carpets. Thank you !

Get your 10 Gaspard pack. At this point, it goes beyond our expectations. You'll meet the Gaspard team in their office!

Get your 20 Gaspard pack! You'll meet the Gaspard team in their offices! Thank you for this gift that brings us even more to our goal!

At this level, you're part of the Gaspard team! You are officially a partner, your name will appear on our website and you will meet the team in the offices. A huge thank you and see you soon!