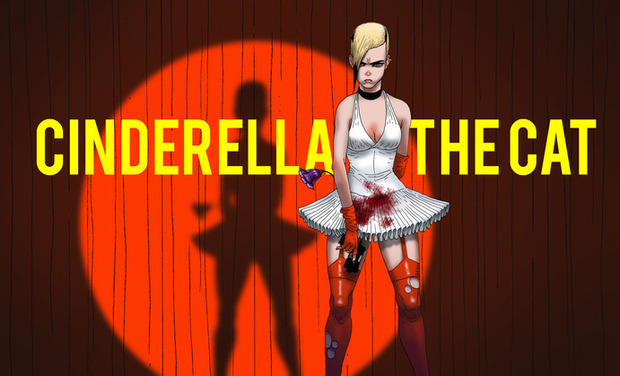 Great success for the crowdfunding campaign finalized to make our new movie promo. Thanks to all of you!

With your help we would to draw the storyboard for the whole film.

Together we can do it! Thanks!

Our Cinderella is set in the misterious docks of Naples, in a not too distant future, where the Chief of Police and the King and his henchmen contend for the territory and a very special girl: Cinderella.

Cinderella, oppressed by her family, servant for her stepsisters, lives in a dramatic setting of injustice, illegal trades, ambiguity, greed and rivalry.  An intense need of revenge against the king - the one who murdered her father when she was a child - is growing inside her.   Until the night of the great ball.

Only through discovering love, she will set her soul free from the dark shadows of revenge and start a new life.

He starts drawing before speaking, as all the cartoonists use to say about themselves.

He attends the School of Arts in Mantovawhere he gets his diploma.

He attends at the School of comics in Milan, for one year.

In 2001 he starts working as a freelance decorator, designer, illustrator and set-designer.

He works all around Europe, Japan and Africa.

In 2013 he publishes the graphic novel “OCEANIA BOULEVARD” edited by Coconino-Fandango that in 2014 has been translated in France (Ici Meme Editions) and in Spain (Diablo ediciones).

These are Marco's drawings for our movie:

Assistant Director, Animation Supervisor and Head of 3D CGI for the Animated Feature “THE ART OF HAPPINESS” (MAD Entertainment, 2013)

Mad means also “the praise of folly”, that sound of madness which led our team to set the studio a unique place in the heart of the historical center in Naples.

A studio which is a young creative factory where illustrators, animators, directors, musicians, sound engineers, 3D technicians work all together to the realization of a dream: to produce indie animated movies

We have produced already the animated feature film

"The Art of Happiness"

This is the trailer

THANS TO YOU WE CAN KEEP ALIVE A NEW DREAM:

We have been working on the Cinderella, the cat project for a few months already.

Our thoughts, ideas and considerations have led us so far to write a story plot, design the characters, study the backgrounds and scenarios and build a music repertoire to underline the most important moments of the plot.

Here at Mad Entertainment we have manufactured a small presentation of the project to disclose some of the cinematic and stylistic contents we want to implement.

Your support will be crucial to give birth to the very first 3 minutes of animation of this fascinating challenge: thanks to you we will give life and animation to the characters, we'll give them a voice through the dubbing,  immerge the story in a world of colours and we'll record the music and sound effects which will go along with the action.

We will use your contribution for:

Supporting Cinderella the Cat means to enter together this adventure and to receive a reward you will choose: a poster, a drawing, your name as as main sponsor or a simple thank you, etc...

Take part to this project!

Your name in the promo end credits + Print of the figure "Cinderella in her hideout" (limited edition 1-200) + DVD containing the movie's first 3', the teaser and the trailer

Cardboard Copy of the main 3 characters autographed by the author Marco Galli (limited edition 1-100) + your name in the promo end credits + DVD containing the movie's first 3', the teaser and the trailer

Cardboard Copy of the main 3 characters autographed by the author Marco Galli (limited edition 1-100) + your name in the promo end credit + DVD containing the movie's first 3', the teaser and the trailer + Cinderella the Cat official shopping-bag "Promo crew"

Beautiful hardcover book containing characters design, background studies and the promo storyboard + your name in the promo end credits + DVD containing the movie's first 3', the teaser and the trailer

BUSINESS SPECIAL: your logo in the opening credits of the promo and in the book + book containing characters and backgrounds studies + DVD containing the movie's first 3', the teaser and the trailer + special mention in the end credits

SEE YOURSELF into the promo! Your face will appear in the realized sequence. Mention as special sponsor in the opening credits of the promo and in the book + DVD containing the movie's first 3', the teaser and the trailer + special mention in the end credits

Jewel creations by Francesco Tramontano: "Cat" ring, earrings and necklace + your name in the end credits of the promo