GetPlastic's kick-off campaign: No plastic goes to waste in Indonesia

Help us to develop a low-tech recycling system initiated by and for Indonesian civil society ! 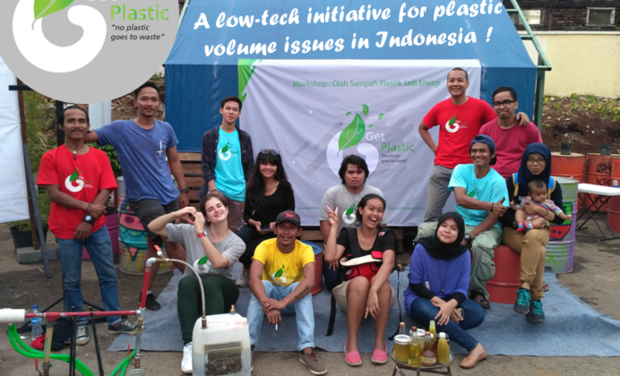 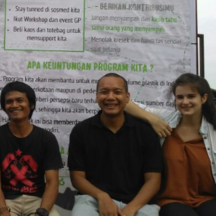 GetPlastic's kick-off campaign: No plastic goes to waste in Indonesia

We are a team of young Indonesians and French living in Jakarta, all coming from diverse backgrounds and expertise. We are all concerned about the impact of plastic waste volume and the absence of recycling system for in Indonesia. In December 2017 we created "Get Plastic" (Gerakan Tarik Plastik), an association under indonesian law  to promote a low-tech tool that can turn plastic waste into fuel oil. Hence, we hope to change the perception of civil society on plastics, so they can see it as a new resource rather than waste and start to sort and process their own.

Dimas Bagus Wijanarko is involved in Youth leadership since 2008 through his own association, Jong Nusantara, with one goal : "Preserve Nature through Culture". He worked in a contractor company from 2002-2006 and became a general manager for a flood pump and solar power plant construction in 2010. In 2014, after discussing with a friend, he started to do research on plastic-to-fuel technology, with references found on internet. He then created a first prototype.

Camille Bonneville is a 27 year-old French, having a bachelors in Indonesian Literature and masters in Ecology (Sustainable Management). Her teenage years were spent volunteering and backpacking in 15 countries, and her approach to both “developed” and “developing” countries allowed her to gather insights and interest in analyzing interactions between humans and nature. She got to work on various issues linked to globalization and climate change, including land grabbing, renewable energies, deforestation, waste management. She lived one year in a Zero Waste community house close to Paris.
She is a Get Plastic co-founder and assists in program management, strategizing and crowdfunding.

Since 2008, Nike Vonika has worked for several international NGOs in issues of diversity and HIV/AIDS. From 2014, after her Social Welfare post-graduation, she became a freelance social researcher and consultant. These exposures gain her numerous networks in government bodies, NGOs and societies. She integrates these channels in to Get Plastic, as well as contributing to plastic waste management designs.

A nature lover by heart, this IT graduate fell in love with any activity beneficial for living organisms. Ahmad Zulfianto’s role in environment began when he established Hutan Jakarta (Jakarta Forest) 3 years ago to safeguard and advance forestry in the capital city and any other. He then created with his friends a routine Pasar Petani Kota (City Farmer’s Market) to help the socialization and absorption of city farm produce. All of which led him to Get Plastic, since he understood that uncontrollable plastic waste may cause catastrophe to all life forms. Zulfi helps maintain and progress the networks and operations of Get Plastic.

Eka Afrina is a social policy researcher in Prakarsa, a well respected and internationally acknowledged local NGO. She finished her last education in Social Welfare Post Graduate from University of Indonesia. Eka is also a social empowerment activist, having served in the most isolated and outskirt areas in Indonesia. In Get Plastic, she serves most as the treasurer and designing program strategies.

Norman Ario Bimo established Institute of Social Development Partnership (LKPS) in 2006 along with a set of social welfare researchers, focusing on qualitative and quantitative research, scientific publishings, social training and counselling, and strategic alliances with governments companies and social NGOs. Bimo believes that Get Plastic not only solves some environmental issues, but also able to empower grassroot economy through social engagements. LKPS is also a founding element of Get Plastic and Bimo serves as its general coordinator.

Here is a summary of our current and planned activities:

Research and development of our low-tech device.
Our machines are built and tested in our workshop in South Jakarta. Based on a technology from Japan, our team try day by day to improve the prototypes to come with the most efficient way to process plastic info fuel oil.

Since 2014, Dimas and the team have donated 4 devices with 3-5 kilogram capacities to cities of Jepara, Bogor and Blitar using scrap material. We would like to create a master prototype with the best design and materials (stainless steel) for us to keep on our own domain in order to be able to tinker continuously in search of perfection, before we duplicate and provide publicly. We plan to do so immediately once the crowdfunding meets its target and concludes.

Construction will take up to 3 months from August until October 2018.

Awareness campaign: Workshops and Vespa Road trip in May 19 - June 30 2018.
Part of the team is currently on a 1200-km road trip across Java and Bali on a motorbike entirely fueled by plastic waste, to bring more awareness on waste management in Indonesia. We are giving workshops on 12 strategic cities along the trip! The cities are Bogor, Cirendeu, Bandung, Majalengka, Yogyakarta, Jepara, Karimunjawa, Surabaya, Blitar, Lumajang, Banyuwangi and Bali.

Local development programs : 2 pilot projects going on.
Two of our devices are already implemented, respectively in East Java (Blitar) and West Java (Cibuntu). Along with these trustful partners, we monitor the progress of plastic waste processing and the enthusiasm of local communities to create a useful resource out of waste.

We have a close relationship with the citizens of Cirendeu village, well known of maintaining a lifelong heritage culture of traditional Sunda Wiwitan religion and an exclusive diet of cassava in place of the colloquial rice staple, to name a few.

The village is also known to be located in the same precinct with Bandung city's landfill, one which in 2005 occurred a disaster where the landfill piled up immensely over time, thus collapsed and buried 2 nearby villages killing more than 150 people.

Their cassava farms applies diesel mills and to enhance their tourism potential, we would like to complement their economic endeavors with our device. Hopefully they will be more independent as a society and be able to apply a circular optimization of plastic waste management to farming operations.

Our implementation is planned for October - November 2018.

Where is our current funding from ?

We started our activities on December 2017 with funding from our own pockets... that are not unlimited, unfortunately :)
This is a general Kick-off campaign : Our middle-long term goal is to sustain ourselves financially through Get Plastic's own activities, products and services - Although we might launch other more targeted crowdfunding campaigns in the future.
Luckily, we are getting more and more well-known in Jakarta through various medias and we are currently in the process or being integrated to an incubation program called RISE (Rich and Impactful Social Enterprise) in Jakarta.
In the meanwhile, any contribution, money or in-kind, is more than welcome!

What will be our activities for the next 6 months ?

In addition to local contributions, your donation will strengthen and maintain our basic daily activities, in order for us to upscale them on next months until December 2018 :

1. Building of a new prototype in our workshop :
Implementation : July-September.
2. Cirendeu village pilot project : building of 1 new tool and monitoring/coordination of 2 field visits.
Implementation : October-November
3. More capital for Get Plastic t-shirts & tote bags sales (basic material, printing). every t-shirt and totebag has a margin of 70.000 IDR (4.27 euros) and we expect to sell 1000 of them. Hence it is important to include this investment in our budget.
Implementation : August-October
4. Workshop maintenance and human resources : It includes the monthly allowance for our 3 full-time volunteers and the rental fees for our workshop place in Jakarta.
Implementation : July-December

Here is a summary of our activity planning for the remaining months of 2018 :

The costs are divided as explained below :

If we reach our 5 000 euros target, we will be able to sustain ourselves for the first 2 to 3 months. It will trigger the t-shirts and tote bags sales which are our next fundraising strategy (minimum 4270 euros) and then allow us to cover a bigger part of the budget. If our crowdfunding campaign exceeds the expected amount, it could cover more of the budget and will strenghten our financial safety for the next months : we will be able to fullfill the increasing demand of pilot projects all over Indonesia ! We indeed have a waiting lists of pending projects in several districts across Java, Sumatra, Komodo Islands, Timor etc.

We will for sure keep our donors updated about it !

Our fundraising officer Camille Bonneville will be in charge to collect all the funds through ASRI, a french-law association, and send them to Get Plastic.
Hence, french donors will get a 66% tax deduction for each donation.

Why organizing a crowdfunding campaign in foreign languages ? Why asking funding from overseas ?

Our team truly believes in local empowerment : Get Plastic has to be created BY and FOR Indonesians. Hence, we continuously collect funds from people here through donations : during workshops in and outside of Jakarta, on the road like in our current 1-month 1200km road trip between Java and Bali, and through Get Plastic t-shirt sales.
However, since the project reaches a high potential and attracts various interests from foreign people both in Indonesia and overseas, we offer the possibility to the largest audience to contribute to this beautiful adventure.

We will keep you updated regularly about Get Plastic's development !

A big Thank you from all the team ! Your name on IG

In this type of project, even the smallest contribution is great help ! Thank you for your support : we send you a warm Jakartanese hug + your name will also appear on one of our instagram posts !

A "Terimakasih" (thank you) postcard from our workshop in Jakarta

Our team will prepare you a special postcard, ready to be sent at every corner of the world !

Official GetPlastic tote bag to do your groceries the most eco-friendly way. Processing the plastic waste into fuel is not a reason to keep on using plastic bags ;-) Colors available : white, black. Our tote bags are all sewn and hand-printed by some members of our team. On top of supporting Get Plastic, you get to help a home-scale business in South Jakarta : 2 good actions in one ! Shipping in Indonesia and overseas.

You will get an official t-shirt "Peduli sampah plastic" (= "I care about plastic waste") Our t-shirts are all hand-printed by some members of our team. On top of supporting Get Plastic, you get to help a home-scale business in South Jakarta : 2 good actions in one ! Colors available : white, grey, red, light blue Sizes available : XS, S, M, L, XL - Male cut/Female cut. Shipping in Indonesia and overseas.

45' videocall with the founders

In addition to all previous rewards, we will arrange a 45-minute interview for you to get a overview of our adventure ! Available in Indonesian, French and English.

1h30 videocall with the founders

We will arrange a deeper 1h30 interview for you to get a overview of our adventure and get some more details of our past, current and future challenges ! Available in Indonesian, French and English.

Make your pick among all rewards, or suggest your ideas !