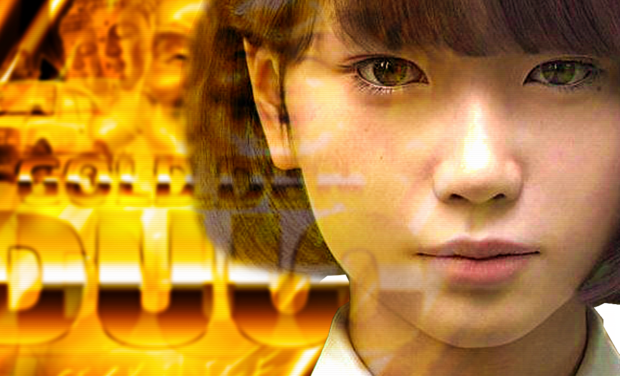 In the Japanese underground came the Golden Duo, a band born of the incredible synergy between Max White and Larry Black. Much more than a musical style, it is a universe with influences as multiple as eclectic in which you embark the Golden Duet of Electro-Funk. Authors, performers, but also directors (clips, videos, reports) and artistic directors, the members of the group - completely independent - manage all aspects of their music and communication themselves.
Larry Black & Max White
It is this efficiency and autonomy that allowed the pair to quickly establish close ties with the Tokyo underground scene. They present today their first E.P which retraces their colorful journeys in the intimacy of the Japanese capital.
The particular style of the Golden Duo undoubtedly comes from their influences - musical, cinematographic or artistic - which form the basis of their singularity. They are the cadores of the French song such as Edith Piaf, Francis Cabrel or Dalida, while passing by the most beautiful voices of Japan like those of Ikue Asazaki, Shina ringo and Utada Hikaru, and without forgetting the timeless legends such as Barry White , Carmen, Michael Jackson, Ryuichi Sakamoto or Pino D'angio, who give the Duo that particular imprint.
But their influences extend well beyond music. From Alphonse Mucha to Takeshi Kitano via Kourtrajmé or Makoto Shinkai, the group's references extend across all artistic disciplines. The list would be -trop- long to do, but it is the essence of the works that have rocked the duo that to fascinate their artistic universe.
In this first EP, the Golden duo presents its universe through 5 titles, which perfectly describe their adventures and their way of life unlike any other. From the funk, the streets of Tokyo, and only one rule: Arukoru O Nomu. The 5 original titles "Stop" "On the B" "Sick Life" "Something" and "Sayonara" tell a story, inspired by real facts, that of two funkers who have sunk a little too deep into the joys of the crazy Tokyoite nights with velvet scent. Far from being content to break the pre-established musical codes, this first project lays the foundations and constitutes the foundations of the first album.

Melodist end and topless topliner, he is the man of the shadow who has greatly contributed to the artistic direction of this first EP. Producer, composer, performer ... His artistic instinct rarely deceives him and this explains his presence in the very closed environment of the Golden Duo.

Patience and perfectionism, here are two words that describe Skao, responsible for the recording and processing of all the songs of this Ep. Already recording many artists in the studio he founded, he has trusted and partnered with the Golden Duo, putting this project at the service of his expertise and undeniable expertise in sound. http://bit.ly/LeSkahProd

Sarah (All Blue Channel) and her strong network of contacts in Japan have allowed the Golden Duo to be put in touch with many artists of the Tokyo underground scene and professionals of the event. http://bit.ly/SarahABC

Producer of talent and director of the vast majority of the instruments of this EP, Defstarz accumulates hundreds of thousands of views on his various works and works. His touch, mixed with the colorful world of the Golden Duo, intends to dust off the musical horizon. DEF GOT IT! http://bit.ly/2WMl8eF

Thanks also to Alice Le Page for her collaboration throughout the realization of this first EP.

Japan has long fantasized the world because of its traditional culture and modernity. This cliché is however grossly caricatural and erases much of the subtleties that make Japanese culture what it is. The particular individual, who is often sidelined for the benefit of the group which marginalizes the less formatted people of this society.

And it is in the underground that best expresses this quest for personality, through codes (sartorial, musical, linguistic ..) that go against the risk of well-risk for its followers to finish put on the gap. Yet it is far from the great arteries of the most tourist streets, sheltered from view, that slumbers this wealth.

Before being a report, Tokyo F City is above all a conversation with Vulgar (IllEffects) who is one of the many actors of this movement (the underground ed.) As elusive as it is enthralling. Music, fashion, memories, lifestyle ... It is during this month long alongside this enigmatic character that this intimate documentary has been shaped that not only traces the life of the artist, his group, but also delivers a unprecedented vision on the other side of Japanese youth.

Illeffects & NFK
Composed of Vulgar (Dj), MatataBeats (TM), TK (TM) and TMK (Drummer), four young independent artists of the underground scene, the group "Illefects" has formed in the street and continues to perform there since . Specialists "wild concerts" (street concerts free ed.) They put their respective talents to work to transport their art and music in the streets, from Tokyo to Yokohama. Members of the NFK (No Future Krew) collective, a rally of bikers whose leader is the charismatic Moto Yan, the group "Illefects" multiplies appearances and projects and literally live part of the Tokyo nightlife.
L'École du Nouveau Monde Vivant
The Duo has also already successfully undertaken several arts and exhibition projects across Asia and Europe. Members of JCAA (Japan Contemporary Art Association), they distinguished themselves by receiving the incentive award at the ARTEX TAIPEI (Taiwan) and the Award of Excellence at the ARTEX TOKYO (Japan) for the collection "School of the New Living World" which was a tribute to the traditional Japanese ukiyo-e -art.

Promotion of the "Sick Life" EP

Returning to Tokyo, the Duo relies on its extensive network of contacts in the undistrie of music in Japan to defend this first EP, intended for both French and Japanese audiences. Dj, artists, clubs, pub ... Many friends are ready to support the Golden Duo, especially in Tokyo and its surroundings.

This return to Japan will also allow for all the clips of ep ep "Sick Life" in the environment that lends itself the best - and equipped with a solid experience of audiovisual production and advanced equipment (Canon 5d mark III, Lumix GH5, Osmo Pocket, Ronin MX ...) to achieve a professional visual quality at the height of the pieces of the EP.

The EP "Sick Life" is only a first invitation in the world of the Golden Duo, the journey is just beginning. Your contributions will also allow us to finance the production of the Golden Duo's first album: "Saigo no chansu" recorded directly in Japan. A big step for independent Franco-Japanese musical collaborations.

As you can now understand, the Golden Duo is not only music, it's a whole universe that spans multiple platforms and supports. In addition to the musical aspect, this presence in Japan will also be an opportunity to achieve:

No Future Krew: This documentary will focus on one of the good friends of the Golden Duo: MotoYan the leader of NFK, which is a punk band but also a Biker rally. More than just a biker gang, NFK is above all a big family. To dedicate a documentary to them will be an excellent opportunity to cross even more the limit that separates these "two Japan".

A series of Live and spontaneous videos live from the Japanese underground (broadcast on Youtube), in order to discover without any filters - outside the limits of the report - this hidden Japan, and the face of those who make it live. "A face to face with reality".

Thank you for taking the time to read this presentation and we hope to welcome you to the Golden Duo Family!