GUILLOTINE is a project of a traditional playing cards deck (as poker cards) restyled by the engraver Mathieu Zanellato. GUILLOTINE is made as a hybrid between traditional picture cards which have been developed from the 14th century (and which were originally printed using woodcut) and contemporary illustration. Sketches and manufacture will not be made using any digital process in order to fully contrast with the actual exclusively automated and industrialized playing cards production to introduce simultaneously original illustrations and manual crafts.

Besides, as the project will entirely be carried out without digital assistance, the pictures of “finished” playing cards that you will be able to find below will only be mock-ups to give you an idea of the result but the final product will only be seen while printing! Suspense!

(above the sketches and the linocut plate for the deck box !)

With the assessment that it is much more exciting to dirty one’s hands with ink than watching a printer laboriously vomiting .pdfs, Matière Grasse editions, created by Mathieu Zanellato, make doing painful, costly and by no means profitable projects that no one else would have bother editing a point of honor.

I edit books, posters, t-shirts, card games, wallpaper… basically everything that can bear with thick coats of ink and my strong passion for printed matter. Since 2019, I use Tarn located Studio Pression’s machines to print my engraving, letterpress, gilding, stencil and many others’ productions.

I have already been using crowdfunding for an engraving project in 2013, L'ENFER VERT, for a contemporary illustration magazine, Matière Grasse 2, and more recently for an Italian card game, SCOPA WORLDWIDE (see below)!

GUILLOTINE will therefore be a game with 54 playing cards (13 for each suit and 2 jokers) in a poker format (63x88mm), pretty conventional, the goal being for the game to be playable in any real life situation and not left to rot on top of a shelf !

The way in which this game escapes conventions is the sketch style!  Indeed, as the name suggests, GUILLOTINE has cut jacks’, queens’ and kings’ heads ! This way, done with class and gender hierarchy, they are reduced to the abstraction of their attire, clothing, arms and other scepters which symbolized their power. Incidentally, aces will represent the cut heads of our dear monarchs and jokers will be their executioner!

In this world of anarchy where we can’t tell the king from the queen, do not worry as we can still count on the K/Q/J letters so that all this beau monde can still be played with !

TECHNICALLY, the game will be printed using engraving, using one color for cards from 1 to 10 (neon pink for diamonds and hearts/ petrol blue for clubs and spades) and three colors for picture cards, the game’s box and the reverse side of the cards. For now, I put my lockdown to use to engrave aaaaaall the printing plates, which represents most of the work time (around two weeks of expected non-stop engraving time hahaha). Engraving is currently done at around 70% ! Then, once lockdown is over (…) I will be able to bring printing plates and to print with Studio Pression’s beautiful Heidelberg machines from the 60s (which you can watch in moving below).

Then, there is the shaping step: guillotining cards, cutting he box, assembling it, cutting round the edges of the cards… in short, things to keep me busy after lockdown !

I want to introduce an original manually printed and shaped card game which usually cost a lot of money. Now, it is very important for Matière Grasse that this game is kept accessible to as many people as possible without having to make concessions on production quality. To minimize costs, I will not be subcontracting any step of the printing (except the production of ink and paper, that I am not mastering yet), but seeing how much work that entails, I would like to make sure that GUILLOTINE will find buyers and that it will not be rotting in my stocks ! I am against mass production and the paper and energy waste it represents; therefore, I prefer to print the number of card games that I know I will sell (adding samples for fairs etc…).

Matière Grasse is a tiny association which does not really have treasury, benefits from previous sales are often fully re-injected into the next project! As I will not be taking any financial risk, I will be able to sell the game for 20 euros (transportation fee included) without fearing it won’t match the cost !

As for the objective of 60 games that I have set, it represents the number of “minimum” prints which balances out the time spent engraving each linoleum plate. I will probably be needing 1 to 2 months to print and shape the games after lockdown so beginning of July if lockdown ends at the beginning of May or later depending on directives ! BUT I HAVE FAITH !

It is also possible for you to buy our past productions (books, posters, cards…)!

You can purchase althought with the GUILLOTINE card deck one of those 5 books :

And one of those five posters : 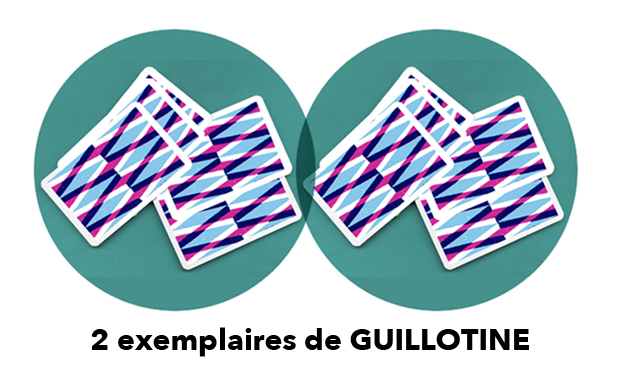 TWO COPIES OF GUILLOTINE, with a big discount !