An open and dynamic research community exists, HackYourPhd invites you to discover it and show you that we all have a role to play! 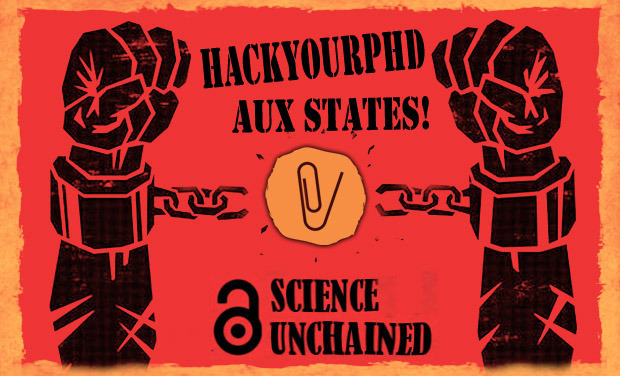 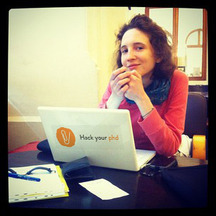 "We have an inalienable right to knowledge, we have to fight for this right." - John Perry Barlow  in "http://lesinternets.arte.tv/A counter-history of Internets"

What do we know about the research world? Often not much or nothing very attractive. The community of researchers seems too often walled up in its ivory tower.

Yet, a committed group of people and initiatives aiming to open up this research in order to make it more dynamic, collaborative, and transparent does exist.

This movement began largely in the United States, which is why Célya, cofounder of HackYourPhD, invites you to go on a journey. Through a web-documentary, discover the current situation of scientific research, which is far from being heartening. But also meet those in the USA who imagine and work to build a more open science! This investigative project relates to research, design, entrepreneurship, and hacking, and those involved devote a considerable amount of work and expertise to it. The freedom of expression that this campaign provides is an inexhaustible source of innovative ideas and an extremely fertile setting for those who need inspiration.

Imminent peak oil, the questionable sources and history of the food we eat, the interest we all have in whether our medicine is therapeutic or dangerous, etc. Causes for concern directly or indirectly connected to research are many as well as the expectations which they arouse.

Is scientific research a Jekyll and Hyde affair?

We expect it to solve all of our current problems, yet at the same time we are afraid of it because we don't understand what its results mean, or how it produced them.

Because research is lacking openness, transparency, and collaboration. From the outside, it seems stuck its ivory tower. The community of researchers often gives the impression of having difficulty understanding current and relevant issues, and adapting its questions to them

Their results are very often amplified by the media as either scandalous or miraculous and are handled with a sensationalist point of view. Public research in France is often only described in terms of its lack of financial resources and the precariousness of its researchers.

Yes, the research world also does not escape the financial crisis. And this is not even to speak about the "publish or perish" rule, which imposes an acute pressure on researchers to consistently produce results and draft articles more quickly, whose conclusions must have immediate economic benefits.

But did you know that, even in these dire straits of science, PhD students, researchers, and citizens are fighting back against this situation? They simply do not accept this absurd situation anymore. They are reinventing research practices and putting their shoulders to the wheel to open this all-too-often black box of the scientific community. HackYourPhd wishes to share this and to show that we all have a role to play to create a more open, transparent, and collaborative research environment.

HackYourPhD: for access to science and to knowledge as a common good :

HackYourPhD is a young community which is barely 6 months old. We arose from the Parisian Science&Web sphere and from the OuiShare community (gathered around collaborative economy). We are a troop of researchers, PhD students, do-it-yourselfers, entrepreneurs and hackers, showing that another way of doing research is possible. We have already led 5 events in Paris, open to all, mixing many spheres of interest.

We are not the only ones to have these ideas and this desire to act, but we are a little scattered across the globe. The internet allows us naturally to connect with each other, but what's better than meeting people in real life?

Today, HackYourPhd goes to the USA to be able to observe, share, and then mix all these ideas a little bit, and then adapt them to France..

Why this project? Why the USA?

We suggest you follow us stage by stage with a web-documentary in the United States this summer.

- Because it is where we have found the first "thinkers" of this more open science and who have called for a different method of research for years. It is always interesting to be able to be inspired by these wise (wo)men.

- Because the USA is very vast, and thus gives the opportunity to discover an inconceivable diversity of projects.

- Because the USA is living through an economic crisis in research more advanced than in France. The entrepreneurs of the west coast did not hesitate to create new start-ups in open science, a trend still little developed in France but by which we can be inspired. The setting is fertile in France and there are many expectations!

A Web-documentary to be followed in real time :

This journey will be the opportunity for you to have more than a glance behind the scenes of this new dynamic and open research. With interviews, videos, sounds, on-the-spot meetings in both laboratories and bars, discover these citizens who are passionate about science and who do not hesitate to put some oil in the cogs of our seized-up research situation.

Here are some interviews already done during an open science colloquium in Quebec.

From East to West, we shall show the diversity of the approaches, actors, and initiatives.

Thanks to a special pass (copass) allowing us to reach coworking spaces shared by worldwide people, we shall have the possibility of making a daily stop in every city. It will be the occasion to meet local entrepreneurs but also to provide you regular assessments on the journey.

-Meeting with some gurus of Open Science:

-Michael Eisen, co-founder of one of the first revolutionary journals in the research world: PLOS

-Brian Nosek, creator of the first center dedicated to the open science,

Meeting with young researchers, PhD students, members of the HackYourPhD community and of the Meet-up organization.

-Meeting of the actors (universities and start-ups) who have created the first MOOCs:

-Visit of places where new innovative ideas emerge from off the beaten path: bio-hackerspace, coworking spaces

And it is only the beginning of the program!

We invite you to co-build, at various levels, the stages and the meetings of this journey, according to your participation in the campaign. Célya, the co-founder of HackYourPhD, will be your spokesperson and your ambassadress. Questions to ask, persons to meet, a theme to be accentuated, or just a place which means a lot to you: feel free to become an actor in the preparation of this journey and follow its progress step by step.

A work of investigation with total freedom of expression:

Thanks to this campaign, this project will be lucky enough to come across numerous points of view and substantial expertise in order to understand the functioning of scientific research, its stakes, and the impact of these new proposals.

A free and flexible editorial lineage and the absence of stonewalling are the keys of this project. And so will be the if-necessary-anonymous interviews and the analysis of more global data about research. This documentary will be far from being a series of articles of institutional communication. It will offer you a breath of innovative and creative ideas and will make you discover a varied and colourful research.

Let us show to the largest number of people that a more open research is possible. We all are responsible for the shape that it takes, let us realize it all together!

I am curious about everything and especially about what can emerge from several human brains questioning and reflecting together..

Cognitive sciences were a front door which brought me a wider scale from which to observe the emergence of innovative communities and to try to understand them.

For more than a year, I was community manager at MyScienceWork, a social network for researchers based on the free access to scientific publications (open access). I observed and connected with different profiles on the Web and “irl” having a common point: the passion for science and the will to create a more open research and to enhance the dialogue with society. I have also been involved for a short time with a magnificent adventure, that of OuiShare: a community stemming from the collaborative economy. I took care of the Open Knowledge aspect of the project.

The diversity of the initiatives which I discovered and the mode of organization used in this community made me create the HackYourPhD project a little more than 6 months ago. My wish is to build bridges between the research world and society and to test new ways of functioning to favor the production, distribution, and access to knowledge for all.

I have recently made a gamble and left my current job to give this project a chance to grow. I am sure that it will find echoes in many people because knowledge and its access are crucial and we can't afford to forget it..

The journey will be made mostly by using the services (departments) of collaborative consumption (ride sharing, couchsurfing etc.)

The spent budget will be indicated on the site and if everything is not spent, the money (silver) will serve to make other events within the framework of HackYourPhd after the journey.

- Accommodation if lack of couchsurfing (250)

One big Thank You and your name on the page of the trip HackYourPhd.org

During the journey four letters to receive in your email box with the follow-up of the trip as if you were there (the beginning and the end routes and stages in the West/East coasts).

A HackYourPhD sticker to customize your computer drawn by the designer Geoffrey Dorme + the 5-euros rewards.

A postcard of one of the cities mentioned above according to your choice + the 10-euro rewards.

The question of your choice to one of the participants(speakers) or during a HackYourPhd Meetup + the 10-euros rewards.

An invitation in the evening of the end of the trip to share together in image the strong moments of this journey + 25-euros rewards.

Coach's session of your choice on the return to the journey via Skype or an appointment (Web2.0 Web2.0/OpenScience/Science2.0 OpenScience) + 25-euros rewards.

The name of your site and the distribution of your stickers during the events in the USA or a video conference during one of the meetings, + the 25-euros rewards. Contact me for further information.

An article presenting your project on the site of the trip and a presentation (display) of your project during an event (official sponsor) + 20-euros rewards. Contact me for further information.

An OpenScience seminar (2 hours) adapted to your needs + 150-euros rewards.