On board their tired van, join Radi and Mounira on their last tour in Israel and Palestine, fighting for the Palestinian identity. 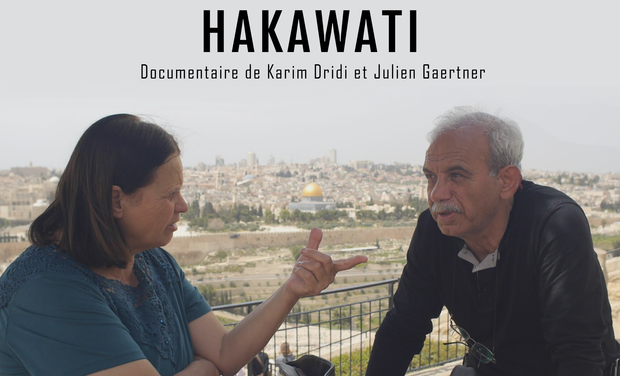 On board their tired van, Radi and Mounira – a 65 years old puppeteers’ couple - leave on their last tour in Israël and Palestine despite the disapproval of their family.

The couple is tired of setting up and pulling down the scene for the shows, performing three times in a row in front of hundreds of children under a burning sun. Now, Yoya puppets are too heavy for Mounira’s hands and Radi has started to forget the shows’ dialogues. Should they make a U-turn to go back home and retire after 40 years on stage? The question arises in the course of their journey. From the Nakab desert to the Syrian and Lebanese borders, from the Galilee hills to Ramallah and the West Bank refugee camps, uncertainty begins. Lost in Jericho, afraid by the bombings near Majd-Al Shams, disarmed by the behavior of Bedouin children who are unable to determine their own identity, the puppeteers question the relevance of their mission. Protecting the identity of their people through their shows, but at what cost? Is their commitment worth sacrificing their health, their love?

A search for the Palestinian identity

Hakawati, the last storytellers is our second documentary film questioning the Palestinian identity and its ability to survive in a territory that is more and more fragmented. Galilee Quartet was raising the question of the refuzniks in the Druze community, through the fate of the eldest son of a family of musicians. It is the model of the treatment we pursue, always with the desire not to confront occupation nor to collide with the conflict. We want to show that the commitment and fight to defend one's identity and culture can be done without ever advocating violence or taking pleasure in being in the position of a victim. The resistance here is only peaceful, cultural, human, sensitive… Artistic!

This time, we focus on a couple of Hakawati, the traditional figure of the Arabic storyteller, the last thread binding the various Palestinian communities together. Because the only thing that remains in these split landscapes, is the art of storytelling. For the duration of a show, Radi and Mounira gather the pieces of a country that no longer exists. Guardians of an identity living on borrowed time, they also assume the role of witnesses and investigators in this movie. Going on board with them is meeting the "Palestinians of 1948 " scattered between Israel and Palestine, scattered on territories that close in on them like vices. "Israeli Arabs" - 20 % of the population of the Hebrew State - or "Palestinians of territories" for those who live in the West Bank and in Gaza, they are Christians, Muslims, Druzes, Sufis or mountain dwellers, farmers, Bedouins. What do they have in common? An identity put to the test by a geographical explosion and by a political dead end. Here, the identity is the object of a quest on the roads of historical Palestine that will exist through a universal tale: the love story of a couple.

Just like their dying van, years of touring, and a situation that keeps getting worse, has battered the storytellers. But Radi and Mounira still love each other, despite the fatigue of this fight that might seem in vain.

Karim Dridi, son of a Tunisian father and a French mother, was born in Tunis in 1961. From the age of 12, he produces, writes and directs several short-length films, including "Zoe la boxeuse" that brings the attention of professionals. In 1995, he directs his first two full-length movies, "Pigalle" in competition at Venice Festival and "Bye bye" selected in Un Certain Regard section at Cannes. He makes a documentary film about Johannesburg in 1996 and another about Ken Loach on the same year. In 1998, Rossy De Palma wins the Best Actress Award at Locarno Festival for her role in Karim's film "Hors jeu". In 1999, he makes the muscial road-movie "Cuba Feliz" which will be selected in the Quinzaine des Réalisateurs section at Cannes. In 2003, he directs "Fureur", in competition at Berlin Festival. In 2007, he produces and directs "Khamsa", selected at Locarno. He directs Marion Cotillard in "Le dernier vol", shot in the Sahara desert in 2009. In 2013, he produces and directs the documentary film "Galilee Quartet", winner of the Ahmed Attia award at Medimed 2014. In 2016, "Chouf", his third movie shot in Marseille, is released, and selected out of competition at Cannes the same year. Karim Dridi is currently working on his next movie, "Les Fainéants"(The slackers) which shooting is planned to take place in 2019.

Julien Gaertner, Ph.D., is a 39 years old documentary film author and director. He also works and teaches movies and screenwriting at the University of the Côte d’Azur and at the Paris Political Sciences Institute.

After a Ph.D. thesis about The image of Arabs in French cinema, he wrote and/or directed documentary films such as:

With the support of Region PACA, the use of own funds, and the enthousiastic commitment of Radi, Mounira and their son Feras, sound ingeneer of the film, we have secured a first portion of the necessary funds. We are currently looking for TV broadcasters.

The money raised will be used to pay the translation into French and English, the editor and the rent of the editing station.

In order to finish the film and invite you to join us in this adventure, here are our goals :

This first level will allow us to fund the translation and the editing :

If the campaign exceeds our funding goal, it will be used to finance more levels.

The funds collected will be perceived by Mirak Films, producer.

A big Thank you !

You will receive a thank you note from the team for your support !

Thank you ! Your name will appear in the "thanks" part of the end credit and you will have a 7 days access to the online streaming of the film.

A DVD of the film + the above rewards

Thank you for your support ! You will receive a DVD of the film as well as the above rewards.

A digital version of the film (HD version) + the above rewards

Thank you very very much !! You will receive a digital version of the film (HD version) as well as the above rewards.

4 original prints of the shooting + the above rewards

Thank you so much ! We will be pleased to give you 4 original prints of the shooting as well as the above rewards.

A signed poster + the above rewards

We appreciate your support more than we can tell ! You will get a signed poster as well as all the above rewards.

A present from Palestine + the above rewards

A very special present to thank you for your incredible support : you will receive a present from Palestine as well as all the above rewards.

An invitation to the premiere screening + the above rewards

You are amazing ! So you will receive an invitation to the premiere screening (excluding travel and accommodation costs) as well as the above rewards.

We have to meet ! So please, come and meet the film's directors and their team during the editing in Paris or Marseilles (excluding travel and accomodation costs). You will also receive all the above rewards.

Participation to an editing/sound editing cession + restaurant with the team

Your support is so important ! We invite you to participate to a half-day editing / sound editing cession + and to eat with the team in a restaurant in Paris or Marseilles (excluding travel and accommodation costs). You will also receive all the above rewards.

A puppet, a unique piece made by Mounira et Radi

You are unique ! And your support is so generous. So we will be very happy to give you a puppet, a unique piece, made by Mounira et Radi. And you will of course receive all the above rewards.