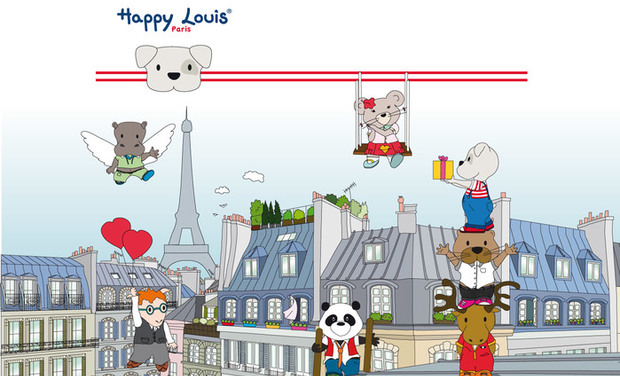 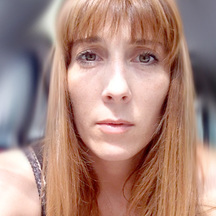 The idea was born on a beach ... A little boy is playing with my nieces, he is holding in his hand a pink bucket with a little famous cat on it.

"It is not really made for boys, isn't it?"  asks my brother-in-law Anton.

My name is Blandine, I am a graphic designer and I created a character for children: a small dog.

I live in Hong Kong with Feist, my adorable boxer; this is where I have developed the character of Happy Louis and his concept.

The world of Happy Louis took shape by observing the children behavior in this multicultural country and by relying on the French etiquette.

Thus, from a simple drawing aimed to satisfy the little boys, Happy Louis has evolved to a more educational purpose to enable each child to live in harmony with others.

Who is Happy Louis?

He lives in Paris and discovers the world with his friends Jian who comes from China, Jack the American, Tiago the Brazilian,  Martin the Canadian, Igor the Russian and his fiancée Yuka, the Japanese. Confronted with other cultures, Happy Louis will grow and learn to respect his friends' differences.

What kind of education can we propose for children here and elsewhere?

Everything starts with a challenge and the finding of a missing feature: etiquette.

Though the world is becoming more and more standardized still cultural and educational differences remain. With the development of technology and transport, each child has or will have at some point in life to travel around the world.

Also, teaching children from an early age the basic rules of life is essential for them to adapt to any situation or environment. "Elegance is an attitude", thus let's do our best to offer to our offspring the best education possible to give them the opportunity to fit any situation at any time and in any circumstances :

- The rules of etiquette: manners to adopt internationally and in each country

- The educational and moral values such as courage, forgiveness, friendship, respect ...

- The openness in terms of respect for each country cultural specificities.

How to transmit these values and this cultural awareness to children?

In the relationship between an adult and a child, there is always a book at the beginning. At a time where tablets and interconnected screens monopolize our lives, authentic and trustful relationships established between an adult reading aloud and a young child remain the first and best way to learn.

Thus through joyful, tender and poetic stories I would win the hearts of children and gain the interest of their parents.

I chose to create characters representing animals whose hero is a small dog named Happy Louis. The characters are all different and come from different countries putting an emphasis on diversity and cultural differences while encouraging mutual respect.

I also chose Paris to host their stories; a city well-known for its ability to fuel dreams and history better than any other in the world.

And what about design?

As a designer, I pay a lot of attention to ergonomics, elegance and aesthetics of shapes and objects.

I want to share this passion through toys, clothing, furniture and accessories for children by expanding Happy Louis universe on other media.

I would like to propose a range of timeless and quality-oriented pieces to allow Louis Happy to accompany children in their daily life by becoming a companion ...  from pyjamas, toothbrush, trim to bicycle, from the cradle to the playground!

Almost 2 years after I started, Happy Louis universe is now built. Now comes the time to make themselves known.

- Launching of a website presenting the Happy Louis universe including books, stationery and games: www.happy-louis.fr

- Launching of a Facebook page supplied by new illustrations: https://facebook.com/happylouisparis

- Conception of a first book for 4 y.o. + children

- Creation of a range of clothing and accessories

To be done:  - Conception of other books

- Launching of an e-commerce website dedicated to products sales

The funds that will be raised will support :

I have already made a number of expenditures and the funds that I wish to collect correspond to the remaining costs, without which I would not be able to create an e-commerce website.

if we go beyond the targeted amount: it will finance the creation of other books, help continue the development of the textile and toys, and cover advertising and marketing fees. Finally, I will use the money to create a first cartoon.

HAPPY MERCI ! your name mentioned on the Facebook page and a Happy Louis drawing for your birthday on your Facebook wall!

HAPPY SMILE ! Get 1 decorative postcard + Your name mentioned on Happy Louis Facebook page to thank you for your support!

HAPPY ALBUM ! Get 1 signed copy of Happy Louis first book + 1 decorative postcard + Your name mentioned on Happy Louis Facebook page to thank you for your support!