Housebound across the world_how to still indulge (oneself)

Because YES, we can find positive stuff in the confinement! Kindness, sharing, getting together around little pleasures :) 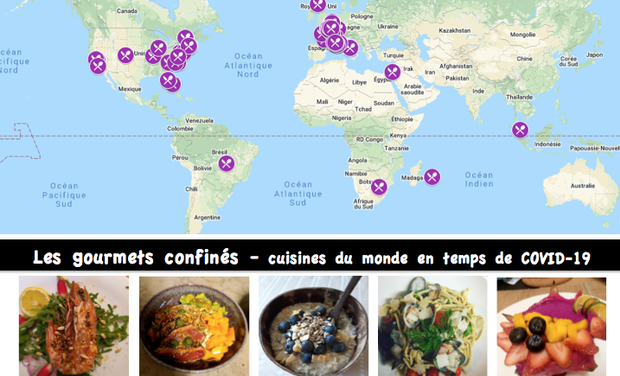 Housebound across the world_how to still indulge (oneself)

The project in 2 words:

COVID-19 is a global economics catastrophe with dramatic social repercussions. To contribute to the movements of generosity flourishing here and there on a global scale, we have thought over a project that would have a meaning, that would benefit the members, that would be useful to the contributors and that would help make things a bit better.

Creators and origins of the project

Audrey working in the digital world is 100% on home office. Lorraine in a restaurant, doesn't work for now. The starting point happened 6 weeks after confinement was decided for France (March 17, 2020). We realized we could be of some help and the idea was to do it on several levels and according to our means (both financial and budget-wise). We realized we were always eating the same kinds of food and we definitely couldn't say that we cooked nice meals. Like what happened on a Facebook group, the idea was to have people participate asking them to share their home-made meals. It's more engaging than taking a mere picture, but also way "richer" in the end. And it's also the opportunity of a culinary narrow escape.

COVID-19 is a global economics catastrophe with dramatic social repercussions. To contribute to the movements of generosity flourishing here and there on a global scale, we have thought over a project that would have a meaning, that would benefit the members, that would be useful to the contributors and that would help make things a bit better.

Hence we decided to create a Facebook group: "Food & Drinks (with love) from home".

The idea: bring people from all over the world together around one of the few pleasures left when you're stuck at home: food :)

With more than 600 members in a couple weeks, and several hundreds of pictures already, receipes, exchanges, this group is kind, provides good ideas on what to cook next, breaks the isolation of some persons, bring back self-confidence, restores the taste of cooking! After all, it's not because the restaurants are closed that we can't take pictures of what we eat and share our meals.

The aim is to make a "souvenir" book out of it in this "out of time period", with (notably):

- a documented intro with key figures

- photos, receipes and tips of the best 100 meals, drinks (we can cook for cheap with what's is at hands!)

- a global map with several hundreds of pictures

- in annex, the best humor posts on COVID-19

As regards the date, we plan to launch the book in September

- continue to grow our community

- write the book, shape it and have it printed

If we're soliciting your support today, it's to allow us to make sure there's a bigger interest for such a project (a cookbook "out of time" in a inclusive mode), get your comments and suggestions and an idea of the amount of your contributions.

The compensations and the contributors' roles

In exchange of your donation, there's 2 kinds of compensations (let's keep it simple):

- paper > real book with or without personalized signing

And a priceless compensations: the happiness linked to giving!

A few figures, not too much...

The funds raised will be used for:

-> 50% of the benefits will be given back to maximum 3 non-profit associations.