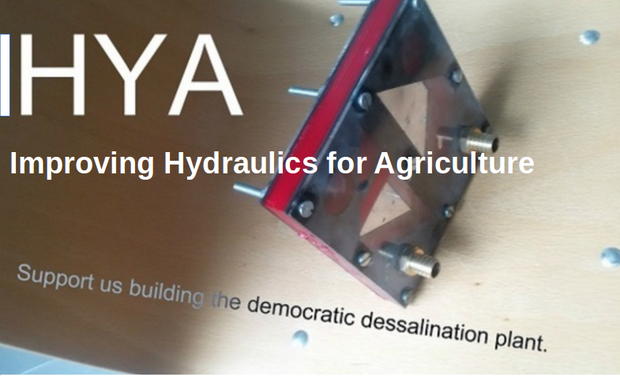 -  Low cost, low tech solution (such as simple solar still) but not efficient enough to be sustainable

In front of this challenge we are proud to introduce you IHYA :

- Use of solar energy to power the unit

- IHYA is afordable for developping countries

Those innovations will allow farmer and individual of developping countries to rely on themselves for water production.

Our goal is to develop the technology and, when it is going to be mature, to release it for free  We belive that this solution has the potential to help a lot of people and could be further optimized by the help of specialist from all over the world.

Today the following steps has been completed :

- design of the solar collector, exchanger and pumping system (on paper everything is fine)

- validation of technical solution for low cost prototyping (and production ?)

We need now to investigate the following points :

- validation of design by performance testing

- industrialization of the final solution

-Karim is a O&G Process and Safety Engineer.

-Wajih is an operational research  engineer

- PIE (Prototype Initial d'essai) which leaked quite a lot :D.

You already had the chance to meet PIE :).

Here is another picture.

The first prototype was made of wood and steel plate hand crafted using classical tools. Not enough precise to avoid the multiple leakage. We abandon it to a more precise solution.

Look how PIE is cute with his green boxes from the famous Swedish company ^^.

The second prototype has been manufactured with a laser cutting machine using plexiglass plate, rubber seal and copper connector. We managed to avoid leakage, we can now start to test the physical behaviour.

Building PIE and PIE II improved our know how. It also opened our eyes on improvements.

We can now have a better estimate of prototyping cost for the next phase :

This has a cost and we budgeted 500 € as a minimal requirement for PIE III.

It will be an important step in the IHYA project and open new horizons.

Why not introducing IHYA to potential first users if we collect >500 €.

BRONZE DONATOR : In IHYA Guestbook your name will be written.

SILVER DONATOR : A personal message from IHYA master receive you will. + BRONZE reward

GOLD DONATOR : An exclusive picture of the project you will receive. + SILVER reward

SAFFRON DONATOR : Wooden key ring with your name you will received + GOLD reward

HEAVEN DONATOR : A travel to Paris to enjoy the city and discover team member of IHYA project