INTERFACES questions the place of technology in our society, a poetic show combining jugglery and digital arts. 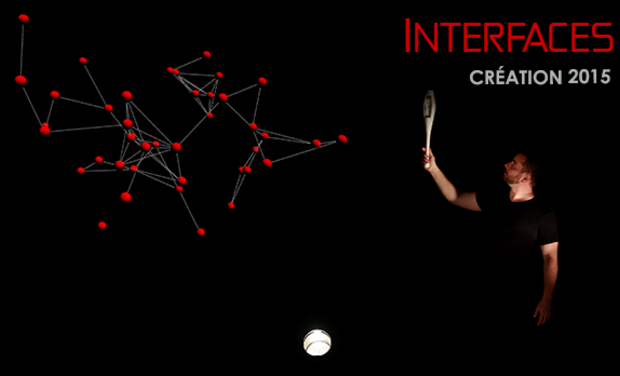 INTERFACES makes us follow the singular journey of a character fascinated by technologies and the ways objects can be put in motion. Losing himself in the interfaces he designes, he explores their limits and finds out their weaknesses, revealing his own humanity. Between real and virtual, feat and sensibility, he invites you to share these moments of life which modulate his universe - a journey between childhood and consciousness.

Please read our artistic file to learn more about the project.

Jugglery seems spectacular, and almost magical, when the feat is highlighted, precise and minimalist when the graphic composition is appropriate, or sensual and obsessing when the emphasis on human feelings is necessary. But, what would happen if we wanted to change the codes of this practice? What would happen if we gave to these objects - vectors of our intentions - the capacity to speak a language of their own ?

The vision appeared clearly to us. By combining jugglery and technology, we will create smart objects, equipped with sensory capacities, enabling them to communicate their positions and to move autonomously. A paradigm shift that immediately ask the deepest questions about the use of technologies in our society and the fantacized relationship between the juggler and his objects: INTERFACES was born.

The show incite us to walk on, the path of the author who built his own identity through the digital technologies that he still uses today to stimulate his creativity and shake the traditional codes of performance writing. An initiatory trip that makes us wander from human being to objects, from objects to the world, with interfaces which enable us to link different dimensions: real and imaginary, abstract and poetic.

We want to give life to objects, to give them a body, an autonomous behavior, a skill to study what makes them unique, precious and weak at times. Throws, drop shots, shocks, accelerations, pressures, compressions, rotations and translations, free-falls, frictions, balances and suspensions: so many perceptible phenomena in which juggled objects are vectors of expression and life infused by the artist that manipulates and expands, thanks to the digital technologies.

The design of intelligent accessories of jugglery is one of the main innovations of the show. These objects will be equipped with sensors, diodes and modules of wireless communication that allow a bilateral exchange of informations with our computer programs.

We’ll hopefully be able to take over the physical and rhythmic relations that take form between the juggler and his instruments and to use this information flow to transfigure these interactions by digital arts.

Please read our file dedicated to the equipment of the show.

Sylvain manages the company since 2007. His work is inspired by his scientific experiment, his mathematical approach of the juggling and the digital spaces he uses daily. After working as an international juggler, he chose to create the compagnie Parapole to promote artistic projects with multiple influences similar to him.

Co-director of Théâtre du Signe with Sylvie Robe, he is particulary interested by the injection of new technologies in live performances. He was trained to be an actor in the interaction between actor and machines directed by Daniel DANIS, a work named “Le corps et la voix, véhicules de nos presences imaginantes” (The body and the voice, vectors of our imaginating presences”). Alternatively, he works regularly with other artistic teams, in particular since 2009 with the 14:20 company, initiator of the current of the new magic trend, company he is working for as stage manager on the show “Vibration”.

After a training on video editing and computer graphics, he joined the Master's degree digital Creation and engineering - interactive Scenography to the University of VALENCIENNES in 2006. There, he develops interactive installations handling the sound and the real-time image. He’s trained on softwares programming as Pure Data and Processing.

The total budget represents 116 605.82 € and we need to fund the 45 % remaining. The crowdfunding will help to finalize the other existing funding.

For more transparency on our budget details, please feel free to read our financial file.

everyone who supported us until now and all the future contributors of this crowdfunding hoping that we will be able to offer you this show very soon in the way we envision it.

The first step of the funding,is 4000 €; it will allow us to complete the acquired funding and to achieve the project. We have imponderable to take over before the beginning of the creation phase and crowdfunds will cover these charges : wages of the artistic and technical team, travels and prototypes production.

Today, even though many partners are currently involved on this project, it is your participation which will enables us to concretize the creation in November, 2015.

The amount of the crowdfunding is only the first step. If the first amount is exceeded, funds will fully be invested in the project and will allow us to go even farther in the completion of our artistic ambitions, thanks to you.

We need to fund 45 % of the initial budget, which is 52965 €, and many charges aren’t directly and already funded. If we exceed the amount of the crowdfunding, we will raise the team wages, pay the manufacturing of the scenography, the first series of objects, bring in the composer of an original music, and forward, always thanks to your participation..

Your support is essential., If we succeed, thanks to you, in gathering more than the amount initially planned, our show will be closer of our dreams.

Thanks for your support of the emergent scene and the live performance!