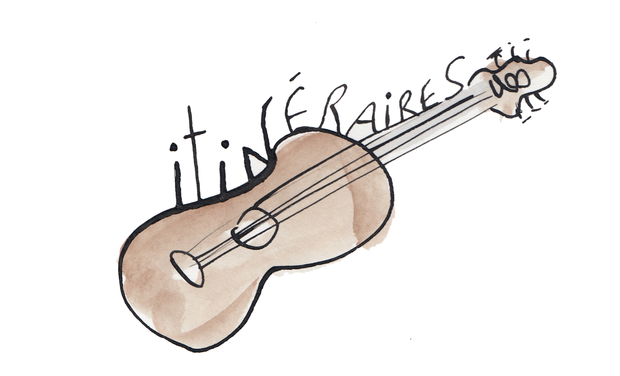 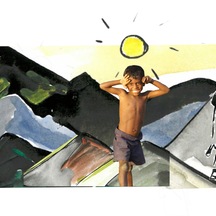 14 years of music together in one album!

Let's get started...I'm gonna need a bit of help, so jump in and buy the album now?

Itinéraires is the name of the album, which will gather 10 to 15 songs composed the last 14 years... Written while travelling, after persons whom inspired me, or after what life brought of challenges and discoveries ...

For those whom knows me little or not at all, my name is Juliette, i'm a mum of two sweet girls, and when they aren't in my arms, I draw, paint, and sometimes a I sing...  I write, compose, music is a natural part of life for me... My parents are musiciens, i early got to hold an instrument in my arms. First violin, then guitar (out of love for Flamenco and gipsy jazz..:) i also went through a rock & roll period and learned to play the drums, without forgetting the numerous choirs, rock band, and then jazz band...  In the same time, i quickly wanted to write songs, already as a child, then as a young woman, often a feeling, an encounter, impressions would impose themselves as songs...  In this album "Itinéraires" i want to gather the best of what I got to write, to "offer" it to you, and to those whom will want to hear it.

Recording planned for february which gives time to prepare and find musicians whom will play along on some songs.. I promess you simple and authentic music... :)

To record the music in good conditions!

More precisly to rent a studio and the service of a sound ingenior (whom will also be an extra musical hear) for this i count 1000 euros for 2 full days. Which is a friendly price thinkg of the editing work that might be done on the music afterward.

The rest will help pay costs for extra musiciens to work on the project. And for exemple having a second guitarist for solos that will just swing ;)

NB. I'll be receiving the collected money, and only will get it if we reach the 1500euros... And, if we do collect more it will definitly be usefull ;) Thanks!

A bit of Itineraires in your mail box...

Thanks a lot! Receive 3 titles from the album on your computer :)

Itinéraires in your mailbox!

First, thanks! Receive all songs recorded on your computer...

Itinéraires on a CD!

First : Many thanks! Receive Itinéraires on a Cd! Collector! (NB home made/ home burned cds!:)

And some drawings on top!

First: so many thanks !! On top of the cd, receive 5 postcards from la coupe au bol illustration! What a chance! :)

Thanks a lot!! Receive Itineraires in your mail box or as a cd (your choice) + a role in my first video clip! Yes yes I insist :)

Plus an original illustration!

Oh la la: thanks !! The music in your mailbox or on a CD (your choice) + a unique poster made for Itinéraires by the wonderfull artist Sylvaine Jenny! (you won't regret your choice ;)

Oh alors là: a huuuuge thanks! Receive the Cd, the postcards, the unique poster, a part in my first video clip if you wish? and let's be crazy: i'll compose a little personalized song just for you!! merci!!