Thanks to you all for this marvelous tribute that together we offrered to our good'ol Jack Burton !

John Carpenter's cult action comedy Big Trouble in Little China is one of the first Hollywood movies directly inspired by Hong Kong cinema. It is now back in a brand-new bluray edition coming in a VHS-inspired case. Many special features are included, as well as a steelbook with a new artwork designed by Paul Shipper (Ready Player One, Star Wars, Avengers ...) and an exclusive booklet on the making-of, two posters, a set of postcards and 12 exploitation pictures. Immerse yourself in the incredible adventures of a likeable truck driver, lost in Chinese myths and legends despite himself, with the collector vinyl of the soundtrack, the comics co-written by John Carpenter, the beautiful board game based on the film, the limited-edition figurine and many other surprises. Order now your Big Trouble Edition, available exclusively on KissKissBankBank and receive it starting 16 October.

In 1986, John Carpenter embarked on an extraordinary project, an adventure comedy set in San Francisco’s Chinatown. Behind the facades of this traditional neighborhood, a mysterious and fantasy world is hidden. A world where good and evil fight with ancestral magic and martial arts. A world a rough-and-tumble good-natured truck driver will have to face despite himself, to help rescue his friend’s fiancée, who’s been kidnapped by an evil wizard.

This adventure full of kung-fu, witchcraft and humor is the homage Carpenter pays to Hong Kong and Japanese cinema he always worshiped. The inspirations for Big Trouble in Little China range from Shaw Brothers and Golden Harvest productions, to the legendary series Baby Cart or to the groundbreaking Zu Warriors from the Magic Mountain directed by Tsui Hark in 1984. With the help of his favorite actor, Kurt Russell, Carpenter switch the traditional roles: his 100% American hero is overwhelmed by the turn of eventsand acts as the comic foil to his martial arts expert Chinese friend !

Far from the clichés that characterize Asian characters in American films, Big Trouble in Little China is ahead of its time in integrating Asian cinema elements with passion and respect. The 20th Century Fox studios were destabilized and did not know how to sell the movie to the audience, which lead to a flop in the box office.

Still, the VHS release was a huge success and the movie became cult over the years, often quoted in dozens of movies, TV series and video games. The character of Jack Burton became an icon equal to Snake Plissken, hero of Escape from New York, also created by the same John Carpenter and Kurt Russell in 1981.

The SteelBook is reversible featuring a signed artwork of the talented Paul Shipper, famous for his wonderful posters for Star Wars Episode VIII and Ready Player One. On the back of the SteelBook is an exclusive alternative artwork.

was associated with the film for a long time. It come with an exclusive made in-house booklet with all the things you always wanted to know about Big Trouble in Little China, the influences of the film and its legacy, illustrated with many pictures from the movie and shoot.

This campaign is also an opportunity for you to get yourselves beautiful objects inspired by the movie’s universe in the campaign rewards.

First the original score, composed by John Carpenter himself with the help of his old friend in synthesizer programming: Alan Howarth. After Escape from New York, Halloween or Christine OSTs, the duo is back for this amazing vinyl produced by Mondo Records. The final track was written by The Coupe de Villes, Big John’s band with two other directors, Nick Castle and Tommy Lee Wallace. Mondo Records is a fabulous American publisher, but their productions sell out very often: make sure to purchase your vinyl now!

The world created by John Carpenter is not limited to cinema: as a co-writer, Big John designed new adventures for Jack Burton in a series of comics after the movie’s timeline. Order now the french version of the Volume 1 specially reissued in association with the Editions Reflexions and pre-order Volume 2 with your bluray (national release November 2018)!

If you like board games, you'll love the wonderful Big Trouble in Little China game, praised by fans : an incredibly rich and detailed game, overflowing with material, from 1 to 4 players, published by Everything Epic.

Let’s not forget the big Pork Chop Express tote bag, high-quality, custom-made in organic cotton 140g/m². Also available, Jack's tank top. Not to mention the pins, which never go out of fashion, with the image of the Pork Shop Express.

We have also selected the most beautiful Jack Burton figure, created by Sideshow: 1/6 scale, with the exact same mullet, denim jacket, Tec-9, knife (an excellent blade!) and even the floating hundred-eyed monster. Includes 3 sets of hands. Careful, only 20 copies are available.

The hardcore fans can even attend John Carpenter's concert in Salle Pleyel in Paris on October 11th, with a backstage access to meet the master himself afterwards !

The shipping for the Big Trouble Edition and the pledges will start on October 16. You cal also meet in in Paris at the Metaluna Store on saturday october 27 to get your pledges, and to have it signed by Paul Shipper, who will please us with his presence !

If the campaign exceeds the initial target, we will have the pleasure to add new rewards to reach the next levels.

200%: you will have a poster of the art created by Paul Shipper in 40x60 format. STRETCH GOAL COMPLETE !

300%: you will have a set of postcards, each with one of Jack Burton’s lines on the back. STRETCH GOAL COMPLETE !

400%: you will have a poster with the vintage art of the film by Drew Struzan, in 40x60 format. STRETCH GOAL COMPLETE !

A 500%, we'll add a set of 12 exploitation photos, and our sponsor Les Années Laser will offer to each contributor their october issue. STRETCH GOAL COMPLETE !

• For the Blu-ray authoring

• To cover the costs of creating the SteelBook, case and booklet 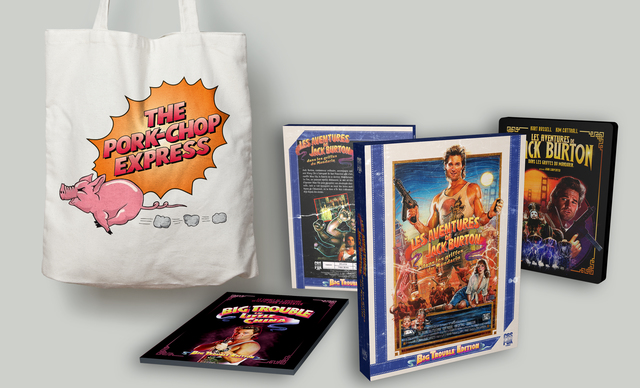 "It's all in the reflexes"

The 100 first of you will have their limited Big Trouble Edition, including the bluray, the steelbook and the exclusive book in its VHS style package with the Pork Shop Express totebag OFFERED ! Add 10€ for shipping outside France. 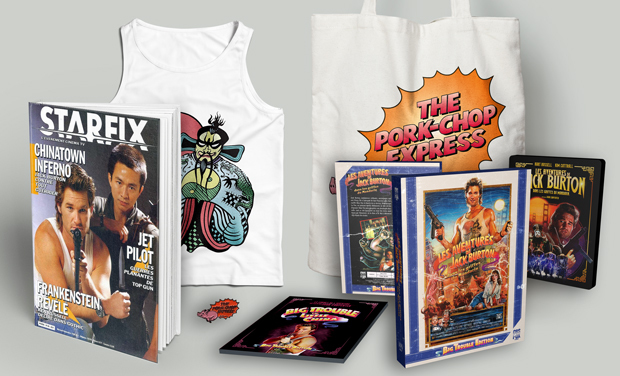 "I'm not sayin' that I've been everywhere and I've done everything." 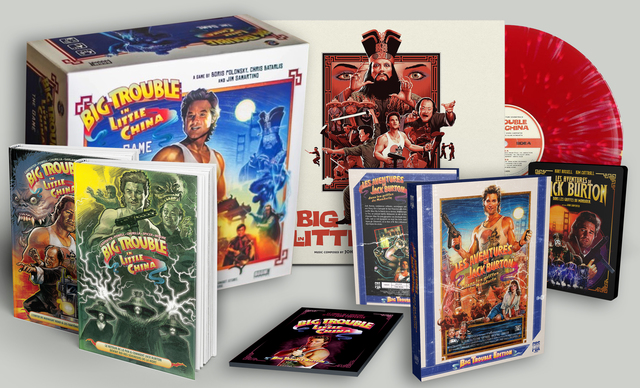 Big Trouble in Little China : the Game Collector LP of the original soundtrack of the movie edited by Mondo Records. The two first issues of the Jack Burton comics, co-written by John Carpenter himself (french version). Your very own limited Jack Burton Big Trouble Edition, including the bluray, the steelbook and the exclusive book in its VHS style package. The exclusive Pork shop Express totebag. Add 20€ for shipping outside France. 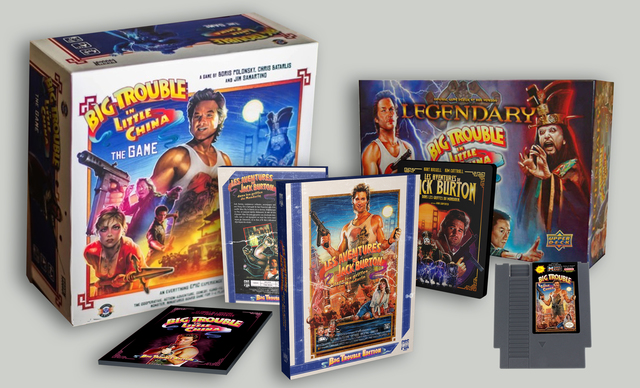 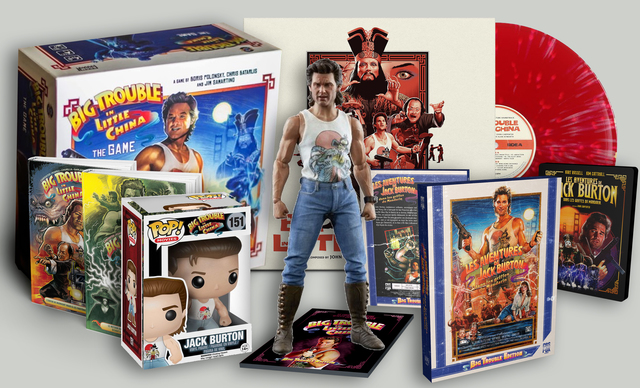 "It is time to collect"

The Jack Burton Sideshow collectible figure. Jack Burton’s Pop vinyl figure Collector LP of the original soundtrack of the movie edited by Mondo Records. Big Trouble in Little China : the Game. The two first issues of the Jack Burton comics, co-written by John Carpenter himself (french version). Your very own limited Jack Burton Big Trouble Edition, including the bluray, the steelbook and the exclusive book in its VHS style package. The exclusive Pork shop Express totebag. Add 20€ for shipping outside out of France. 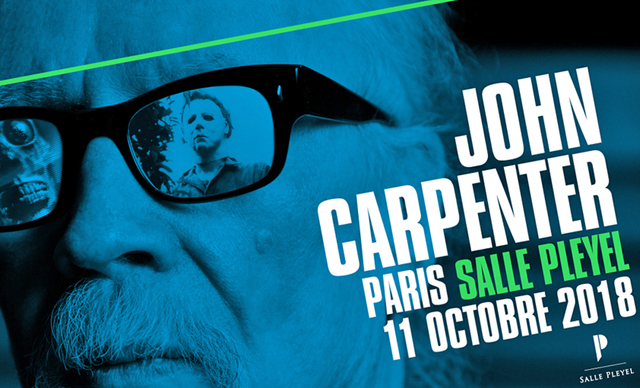 "Just happened to be in the neighbourhood on a dark and stormy night ?"

Your VIP ticket for the John Carpenter's concert at the Salle Pleyel in Paris on october 11th, with backstage access to meet Big John after the concert Collector LP of the original soundtrack of the movie edited by Mondo Records. Your very own limited Jack Burton Big Trouble Edition, including the bluray, the steelbook and the exclusive book in its VHS style package. The exclusive Pork shop Express totebag. Add 20€ for shipping outside out of France.