Participate in the financing of the JANGO BOX (collector's box in the form of, suitcase containing: CDs, DVDs, T-SHIRT, BADGES ..) 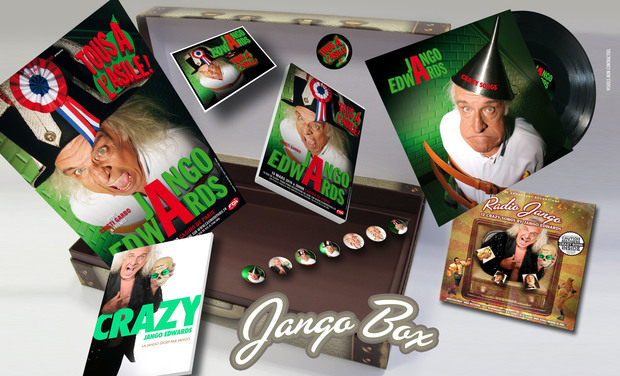 His name is Edwards, Jango Edwards!

The famous American humorist, which celebrates his 40 years of career, comes back with a brand new show :  "ALL AT ASYLUM ! "

Still indomitable, the serial laughing who made die laughing the entire planet, offers the opening of his new show to the French public, with a special show at the Casino de Paris on Thursday March 10th 2016 !

The opportunity for us to offer to all fans of our Guru of laugh, to participate in the financing of a collector box: the JANGO BOX !

As a suitcase, identical to the Jango's clown suitcase, you will discover a series of cult objects in limited series.

Jango Edwards isn't a simple clown, who crashes beer cans on his head, or spray his audience with fresh eggs (or not) and confetti.

It is also one of the most generous artists of his generation, who dedicated his career to the welfare of the other...

Nobody can resist him!

King of entertainers, and sometimes entertainer of kings (he counts among its fans the Queen of Netherlands!), he impressed the most famous of the Impressionists: the painter Salvador Dali himself!

All these stars that continue to run to each of his appearances, have never made him lose sight of his goal : to bring a little happiness to the audience!

Guru of laugh, Jango Edwards is also the Mahatma Gandhi of showmen ... like Iggy Pop or Jacques Brel in their respective disciplines, Jango became master in art of stagecraft, he also taught for several decades in the famous workshops of laughter titled  "New Institute Clown" that bring together the best young artists in the world.

Pastor of the Church of Broad Smile (Church of Grin) for ten years, it gave birth to the "Festival of Fools" (the Festival of Fools) from 1975 to 1984, which will bring together the largest clown conventions around the world. He also stages numerous shows including: Ultima Recital by Marianne James, Nina Hagen, Patrick Timsit, and many other global stars.

Jango preaches laugh across continents as a pastor dedicated to humor and frenzy !

He abolishes borders of laughter and triumph over all continents, whatever its public language.

We will produce the ALBUM RADIO JANGO (with all memorable records of Jango Edwards’ career) and the DVD of his new show "ALL AT ASYLUM ! ", with an exceptional show on March 10th in France at the Casino de Paris.

On the occasion of 40 years of Jango's career, we want to produce a LUXURY VINYL in a limited edition numbered, and especially a COLLECTOR BOX, as a suitcase, identical to the Jango's clown suitcase, who will include series of cult objects in limited series!

This is a collector's project, made in very limited quantities, accompanied by a certificate of authenticity (including a serial number!).

This box is for fans of the most famous clown, but also to those who wish to have a cult object, manufactured with the utmost care, respecting the quality of Jango's creations and his unconventional spirit.

Unique creation, the contents of this box are intended as a remedy against the gloom, and a tool of memory of the king of clowns !

A box tribute to the man who continues to give everything to his public, on all the stages around the world.

This object may not exceed 1,000 copies, the first 300 copies will be offered in priority to KISS KISS BANK community, and will be complemented by a postcard autographed by Jango Edwards himself !

The sum will be divided as follows :

- Design, Design and Print of boxes / suitcase, in limited edition numbered, and its contents:  10,000 €

- Other costs of delivery of counterparties and Gifts: 2,000 €