The Collectif Réversible goes to Rauma, in Finland, to develop with its inhabitants its polymorphic participative installations! 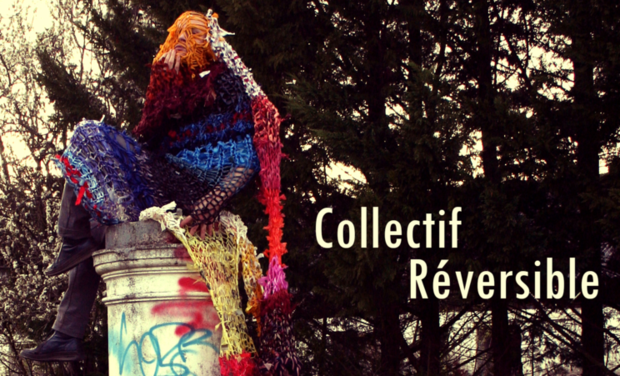 Have decided to unite their strenghts to realise participative installations projects in public space.

You will discover here how the idea came to them in Lyon and brought them all the way up to the south of northern Europe!

Where the project’s origin , in the condemned district of la Guillotière (Lyon), is discussed.

La Guillotière will be renovated.

It is still a risk today.

Through this method, we want to make the imaginary spaces brake into the public space through the contact between us and the inhabitants of the selected place of work.

It is about finding together the passage points which will make reality fall into fantasy.

They will then have to be realised into installations and performances.

Where the three protagonists sail on the events

We have climbed on board of this project by the end of 2011, eager to see where those ideas would lead us.

We have discovered strange creatures, sitiing, standing or lying down in the ball of thread, in the folds of our knitted material.

They would come and follow us in the course of our wandering.

Sometimes, the stitches would vibrate and talk, giving body and voices to the place where they were, at the Bellevilloise (Paris) or on the embankments.

Curious surprises. A silk kimono unrolling itself from a raffia ball, sound-producing trunks which have grown where not expected.

The year 2012 brought us towards the Raumars artistic residency  and thus, to the finnish shores where lies the city of Rauma.

Finally the occasion of doing our participative installations in good conditions arises. This is to say, with two months which are dedicated to them and being supported by a well implanted association which will help us with connecting quickly with the inhabitants.

Where the question of « why Rauma ? » is answered.

What do we know about Finland ? Rauma? The Finns?

Not so much finally. So we started to read, to find about it.

A few surprising facts, for us foreigners, that we have encountered; we have learned that the country has gained its independence only in 1917 after being, since the Middle Ages, under Swedish control and then Russian.

That the stories of the great finnish epic, the Kalevala, were only compiled into a single work und published in the 1835 or that, in these texts, an object which brings fortune, the Sâmpo, is being chased by everyone without anyone knowing what it looks like!

During the course of our researches, Rauma revealed itself as being a perfect place to continue our netting / knitting work.

This city is a historical place of the lace production which is celebrated precisely at our residency’s end by the “Rauma Lace Week”.

Moreover by its status as a harbour, Rauma has an important History of fishing and its inhabitants had for a long time made and repaired the nets used to catch the fishes.

It comes almost without saying that there is already there several points of encounter between our project and the city’s History. They constitute openings towards the collective mind of the place and get into the way the various generations of inhabitants refer to it.

It will perhaps also allow us to understand how a given culture survives und develops itself in the time of globalisation.

In a time where, by example, foreigners from all over the world come to spend several months in Rauma in order to develop artistic projects for some, nuclear plants for others (opening and development of an Areva nuclear plant in the region.)

Where we talk about project’s practical sides

We have setted a framework for our operations which gives us the project’s guidelines.

We will follow the steps that we have mentioned in the first paragraph, to collect, to transform, to install.

They will be punctuated by regular workshops with the inhabitants. It will allow the work to develop itself in a continuous dialog until the final installation / performance which will mark the end of our residency.

According to its evolving nature, it is not especially appropriate to talk here about the methods which constitute the frameworks.

Thus, they will only make sense once we are arrived.

And see how the project develops itself! Starting on June 1st!

This project is scheduled from June 1st to August 10th. We have already concretely started it by engaging, since several months, a dialogue over the project and the best way to integrate it in the city with the team from Raumars.

The latter will provide us with a flat, a 600 euros budget and will make us benefit from its networks in the city in order to develop our work at its best.

Although this budget is a minimum which will allow us to work with the basic needed materials. But augmenting it will anyway be better for our work as we will be able to complexify our installations and work with a higher number of participants.

Your support will allow us to cover the following costs:

The outwards and return plane tickets for three. 1000 euros

And 300 euros to cover our host website’s cost if we achieve a successful fundraising!

Any extra money will go into our materials / tools budget.

Thanks for reading us and for your support!