Our garlic-flavoured album is almost oven-ready, the only missing ingredient is your support ! 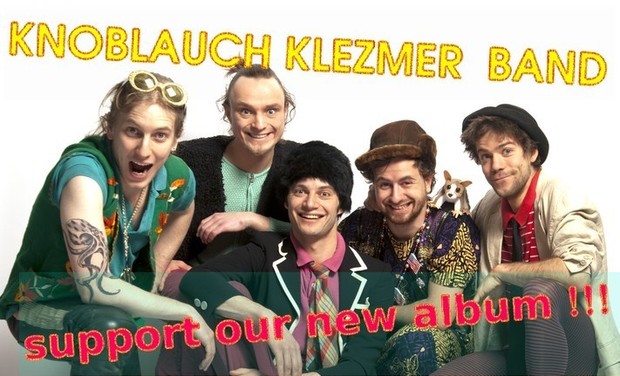 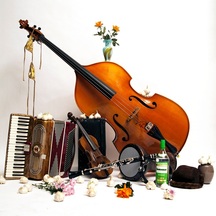 *** If you would like to support our album, BUT YOU DON'T OWN A CREDIT CARD, you can also make a BANK TRANSFER  or make a payment using PAYPAL. We will add you to the campaign contributors list on this website, and you will receive an award and will be treated exactly like a credit card contributor :) Just email us at:  knoblauchklezmer@googlemail.com, and we will give you our bank and/or paypal account details ***

A short history of the band

We are 5 young musicians from Berlin, Paris, Riga, Edinbourg and Jerusalem who met in Berlin 2 and a half years ago. We shared the same passion for Klezmer, Roma and folk music from the Balkan. The deep emotions of joy and  melancholy that  flows from this music brought us together and led us further on a path that we had never expected.

At the beginning, we were mostly playing traditional pieces. Slowly but steadily, we started adding our own original compositions to the traditional repertoire and began developing our own unique sound and style. We were often surprised by the enthusiastic reaction of the crowd. We performed in more than 100 concerts - in festivals and clubs, synagogues and churches, weddings, kindergardens, theatre productions and of course - last but not least - on the streets.

The energy created in those varied performances pushes out to explore this new path even further. We use the acoustic instruments of a typical klezmer band  - clarinet, violin, accordion, double bass and percussions - to explore new modern styles like disco, pop, grunge-rock, modern classical music and jazz. We recently added a new ingredient to our musical recipe: words. With their help, we depict our worlds with a hint of irony.

What is our new project ?

After releasing two hand-made EPs, it became clear to us that our next creation must be a fuller and bigger enterprise.

For the last half a year, we've been working relentlessly on the material and sound of the new album. We finally reached the last steps of crystalizing the record. The next steps - the realization of the project - depends on you.

We honestly believe that we are creating something new. At the same time, we are dedicated to the highest level of musical professionalism - beginning with the composition of the songs, through the intensely rehearsed performance, and all the way to a top quality sound and production for the album.

The previous EPs were recorded in lower quality than we had wished. We want to get away of this financial limitation in order to provide you with a high-quality musical experience.

Our current earnings prevent us from financing the album ourselves, this is why this project can come to life only with your support.

Your support is not a philanthropic donation. In return for your contribution, you will be the first to enjoy the outcome of this project, together with exciting rewards, from us to you!

Our garlicky fusion of styles and influences could only happen at this particular time and in this particular city.  We invite you to be an active part of this creation process !

How will we use your contribution?

Now, the funny part :D we prepared a detailed program and established a budget based on it.

we contacted a few professional recording studios in Berlin, which specialize in acoustic recordings. We expect to spend 4-5 days recording in the studio.

On a few selected tracks, we will collaborate with some of the leading musicians of  Berlin. We would like to reimburse their time and effort.

The rough recordings will need further editing done by a sound engineer. The costs approximately eqal those of the recording itself.

We are collaborating with a graphic designer who will work on the cover and inlay artwork for the album.

C) Production of the album's hard-copies

This includes the pressing of the CDs and the printing of the covers and inlays.

We want to produce a music video for one of the new songs, to accompany the release of the album.

This includes the costs of:

A cloth bag with our logo + previous

You'll get a haircut from us + previous

We play you the song of your choice from the Knoblauchs, over Skype + previous objects

A tour of the Wedding district in Berlin, on the steps of Moishe Eisenbauch, our inspiring muse, in english/german + previous objects

You will appear in the credits of the album + previous objects

Your very own KNOBLAUCH SONG ! Give us a name of a close friend, an dreamy image, a funny idea and we would compose it into a song and record it just for you ! + previous objects

PRIVATE CONCERT - in a special place in Berlin, or its surroundings, just for you and your friends ! + previous objects