Kool Kids Klub needs you to edit the next issues and to organise an event. 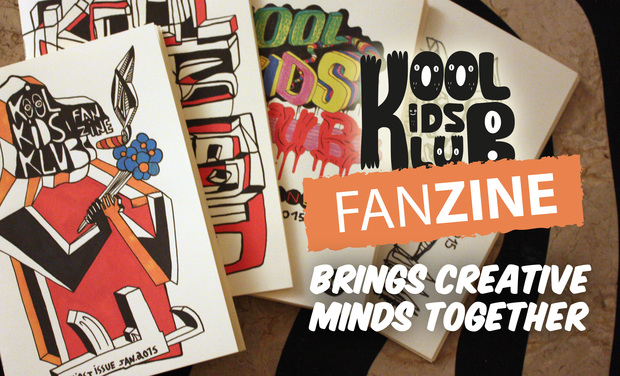 Kool Kids Klub is a small independent edition who saw the light of day in January 2015 at the initiative of young artists from Brussels. Our main purpose is to gather different artists from various backgrounds and disciplines every month. We have already released four issues so far, but we need a financial support in order to sustain our project.

The team is originally composed of three young people from Brussels, Zephyr, Gilles and Joy. Passionate and full of ideas, they have been working together on different projects since early 2013, and have now decided that the time had come to create an association.

The team has ever since grown and we are now surrounded by artists as well as non-artists interested in the project and willing to help it carry on successfully.

Kool Kids Klub does not yet have its own meeting space, but the research is currently underway and we hope to be able to present our future projects in the course of the year.

Our first project as a non-profit organisation is the Kool Kids Klub Fanzine. Designed by young Brussels artist Zephyr, founding member of the association, this home-made edition aims to present monthly about fifteen artists of all kinds, available to everyone. As it is nowadays hard for an artist to present their work individually, we would like to offer them the possibility to show what they do to a new kind of public. This fanzine would thus stand as a window on contemporary creation, whether through drawing, painting, photography, writing or any other artistic discipline displayable on paper.

Every month, we launch a call to contribution and contact artists whose work we like. Afterwards, the team manages the formatting and the printing before delivering it all around Brussels, on foot! In short, everything is realized by our care.

The fanzine is currently sold at the price of 2€ in order to cover our expenses. We produce 100 copies per edition, but following the success of the first issues, the ideal number would be at least 150. This is one of the main reasons why we need your help: issuing more copies without raising the price. You can get these publications (within the limits of available stocks) by contacting us or by visiting our different distributors in Brussels (bookshop Brüsel, Mr. Ego Shop, Montana Shop, Multi BD, etc.). In order to expand our distribution, we attend different micro-edition « markets », such as recently the Mini market of micro edition at Recyclart, Bruxelles, the Zine Happening in Gent, or the upcoming Falon Foireux du Fanzine, Brussels, in June.

Who are the artists already involved in the project?

Any event in Brussels ?

In order to celebrate the 6 months of the fanzine but also the creation of the association, we would like to organize a free event which would take place in Brussels, in June (date to be confirmed). During this event, we will set up an exhibition in order to show original pieces of work from artists that have already appeared in previously released issues. Drinks and snacks will be provided so that both artists and public will be able to enjoy “kool” surroundings to meet, as well as an information point to present our project. There should be a live painting, workshops, an on-site created fanzine,… Many ideas we hope to realize according to the venue we find

Of course all of this cannot happen on its own and most certainly not without material.

We’ve been able to venture into this project thanks to some private starting aids, but unfortunately, we can no longer rely on them. Which is why, in order to release the next issues, we’d need a 500€ funding.

Further to the realization of the first four editions, we already have a quite accurate idea of the costs:

With the money raised, we expect to be able to produce and release the two next editions (May and June). As to the further issues, we assume that the distribution will allow us to sustain the project.

The second project for which we seek your help is the organization of the above mentioned event on the occasion of both the fanzine and the association’s 6 months anniversary. We will try to get some external support from partners and sponsors, but such an event does not come free of costs. Thanks to our experience in events organization, we can estimate that 1000€ would allow us to cover the expenses of a room rental, some technical supply, food and drink supplies and promotion.

We would like to rent a space for one weekend, so that a maximum number of people can enjoy the event. For this purpose, we count a minimum of :

+ 100€ for the purchase of beverage that we will offer to the first-come.

If we exceed the desired amount, we intend to invest the additional money in the printing of further editions, in a bigger place for the event or in the future projects of the Kool Kids Klub, according to the money collected. In any case, we promise not to disappoint you and to do our absolute best to ensure the Kool Kids Klub achieve its short- and long-term goals.