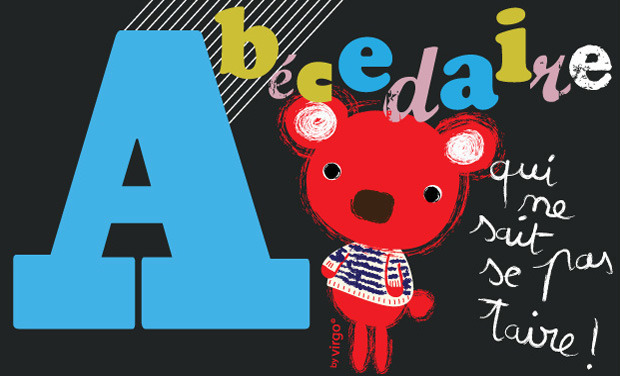 Virginie Aracil is a graphic designer, who specialized in the children sphere. She has recently joined Europa-Apps' circle with her first mobile application called Kids Square, in which her main character and avatar Virgo takes you to her poetic and colourful universe, inhabited with bizarre animals.

Virginie now wishes to make her dream come true, and publish an ABC app for mobile devices, in two languages (French and English).

Each letter is presented with a variety of funny pictures. When you touch one, you hear the corresponding word and the picture becomes animated!

Once you have discovered all the animated items, a totally crazy red bear jumps at the bottom of the device screen like a Jack-in-a-Box. The child tries to stop him... but the bear is far too talkative, just like a chatterbox! He invades the whole screen and starts sort of singing exercises. Then he says an unsual sentence, which comprises the current letter several times.

After fashion studies at the Ecole Supérieure de la Mode in Paris, France, Virginie Aracil created her own organic cotton brand, byVirgo. Today, she is also an advisor for brands' activities dedicated to kids, like the one of the famous Galeries Lafayette. Her illustrations convey a kind of light-hearted humour, which always remains benevolent.

Though she has always been attracted to the publishing field, she never could enter it. When she became the mother of young Eliot, she noticed how toddlers were fascinated by touch screens, and how beautiful and funny some mobile apps could be.

Virgo made a decision: she would be a digital author!

Europa-Apps and Virginie had an instantaneous mutual crush. After we released her first game app called Kids Square, we decided to initiate a bigger project together, a project of which Virgo had been dreaming for a very long time: a digital ABC for mobile devices.

"I wanted to conceive a totally free browsing through the alphabet letters, enriched with words I like and decorated according to my personal style.

I wanted this ABC app to be fun and new, to make it an edutaining space."

To offer an ABC which would be fun and interesting for kids, but also beautiful and stylised to their parents, that is Virginie Aracil's ambition with her project.

Here is where she finds inspiration:

If you support our project, you will receive exceptional rewards, custom-made according to your taste!

The names of all the KissBankers will appear in the app credits, no matter how much they fund!

Above 40 euros offered to the project, we will send you an organic-cotton t-shirt exclusively designed by Virginie Aracil. Above 50 euros, you will get a fancy bag.

One more small effort and you will receive a plate of your favorite letter, printed on high-quality paper!

And for the most generous of you, Virgo will put all her talent at your service and paint a square canvas (50cm x 50cm) of your child.

We are very much counting on you, thank you in advance!

Developing a mobile application is not an easy task, and it requires many different people to see through a quality project.

The amount we will get will de destined to:

• Animate the pictures of each letter: 2,500 euros

• Record the voice of the Red Bear, who is going to teach the kids ABC in two languages (French and English): 2,000 euros

• Conduct Marketing operations to promote the app among the flood of new releases on the App Store: 2,500 euros

As Virginie Aracil's publisher, Europa-Apps will fund 4,000 euros. There are thus 6,000 euros left to provide.

As for now, our budget would not allow us to animate more than 2 or 3 pictures for each letter. If the target amount is exceeded, we will be able to do more, and thus make the ABC all the more living.

The rewards will be shipped directly to your home. Please note that we will retain extra 10 euros for shipping abroad.

Thank you so much for your contribution!

A great "Thank you," and our eternel respect

Your name in the apps' credits! + One complete version of the app for free!

Breakfast every Sunday morning in your bed, comprising fresh home-made croissants + Each day of the week a plane will fly and write in the sly how gorgeous you are, how perfect and how much you have talent to find new great projects!