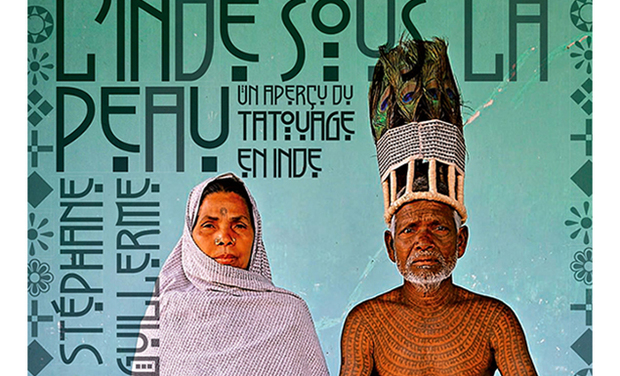 Hello, my name is Stéphane Guillerme. I am an author of books about India.

My last project named in french « India under the skin » needed 7 years of research (7 trips of 3 months minimum each ones). In that 224 pages book illustrated with 250 pictures, I tell about the different worlds of tattooing all over India. Here is the text that will be printed on the back cover of that book that will be released next october, a bit more than 1 month :

« Stéphane Guillerme, in love with India and the art of tattooing worked many years for that book, wandering India all over, meeting a lot of people, shooting pictures tirelessly. Opening his book is taking part of his trip, sharing his passions and humanity. You will be fed with an extraordinary trip that won't leave you indifferent.

The tattooing in India is probably millenary, used by the first tribes as a clannish signature, well before Hinduism. The tattooing is also a popular art form, associated with the enthusiasm mostly seen during pilgrimages and melas. And last, the art of tattooing is now urban, the indian youngsters, just as the western ones, inking their sensibility and their artistic views.

Tribal tattooing, popular or urban, the three chapters of this book show 250 pictures of that research, each ones from a unique meeting, just like the texts that comes along with these shots.

For the ones who love the art and tattooing and/ or who love India. Une invitation au voyage. »

You can read and watch some of the pages and photos of this book, and some steps of that research on the Facebook page dedicated to this coming book : https://www.facebook.com/-India-under-the-skin-by-St%C3%A9phane-Guillerme-817294435046033/?ref=ts&fref=ts

But firstly, here is the cover of that book, a photo of a Ramnami couple. The members of that social group, in the past, used to get fully tattooed with only 1 word, the name of their gods : RAM, written in a constant loop. Only 6 of them remain alive. Nowadays, in memory of that special identity, members of the Ramnami community just tattoo RAM once.

In order to visualize a bit of that book, here are a few opened pages that you will find in it : Some pages from that book.

I mention many ethnies using ink, for very long. Here is a Banjara lady pictured in the Hampi market, in Karnataka. In the past, this group used to move around the country. Delivering goods all  around using their bullock-carts, they were the "truck drivers" of that old time. Nowadays they are settled, mostly in the southern part of the indian peninsula.

In Gujarat, western India, you can still see many tattooed ladies. Identification or beautification signs, tattooing seems so ancient that it might be older than Hinduism itself. Even a lot of brahmins (priests) are still marked over there. Here is a Rabari lady, social group that you can see all over this state, mostly.

If mostly tattooed on the arms and legs, it happens that other areas of the body are also inked.

Tattooing is still a street practice. Terrific hygienical conditions and low artistic skills, this kind of tattooing still carries a lot of the indian story, from secularism to religion, far from the common indian clichés.

Hindu men from the lower casts love to get tattooed, practice that is called "godna" over there. But, except for moslems, all the other religions accept it very well too : chistianity, buddhism or like here sikhism.

The best places to meet street tattooists are the melas, these big religious fairs where secularism meets sacred ... in a big cloud of dust :)

Doctor Kohiyar is the father of the indian modern tattooing.  I met him for the first time in 2010 in his place where he used to practice psychoanalysis and ... tattooing on saturday. I dedicate 4 pages to him, the minimum I could do for such an amazing man.

In this book, it was also compulsory to talk about the Leu family. Felix Leu, the father has been, along with his wife Loretta, among the first westerners who started the art of tattooing during the hippy era, in Goa back in the late 70's and the 80's. For the book, Loretta wrote a text, allowed me to reprint an article that Felix wrote for a tattoo magazine in 2002, and she also allowed me to print some of her own pictures of that (good) old time.

Mumbai is the economic heart of India. Modern tattooing, just like in Delhi, fastly grew over there. Some of the big names of the place are now : Eric Jason D'Souza, Archana Bhanushali, Yogesh Waghmare, Sameer Patange. But also many other very good ones.

The book will be released in October 2016, and I am yet solicited for various events, events that want me to exhibit some of the pictures taken from that book. Festivals such as « L'Inde des livres » in Paris - November 2016. And also the great book fair « Etonnants voyageurs » that will be held in May 2017 in the french western town of Saint-Malo. I also have the will to show this exhibition in cultural centers and fine tattoo parlours all over France, but also in India (I am yet in touch with the Alliance Française in Delhi), and also in english speaking countries such as UK and USA. So I have to invest in fine art printings. It's at this point that I need your collaboration. I want to print 16 pictures in high quality (Satin Canson paper, mounted on an alumnium 3 mm sheet Dibond. With a alumnium frame for hanging). They will be printed in Auray (West of France) with a professional printer (www.tirages-exposition.com).

Chief of a Konyak village - Nagaland

Before all, let me precise that for most of the donations I will ship a copy of my book « L'Inde sous la peau » (in french only, so far), signed if you want. This book that will be released next october will be on sale at the price of 25€ in shops. I earn 8% when sold in shops and 40% when I sell them directly. Therefore to get it from me is to support the author and this project. For this crowdfunding campaign I will print some beautiful post-cards too. I SHIP ALL OVER THE WORLD. Thanks for the support.

This fund-raising will allow to cover these expenses :

5 printings, 50 x 75 cms / Digital printing in HD on Canson satin paper stuck on a Dibond 3mm aluminium sheet. For hanging, on the back of the printing, an aluminium strecher frame.

5 printings, 60 x 80 cms / Digital printing in HD on Canson satin paper stuck on a Dibond 3mm aluminium sheet. For hanging, on the back of the printing, an aluminium strecher frame.

2 printings, 80 x 120 cms / Digital printing in HD on Canson satin paper stuck on a Dibond 3mm aluminium sheet. For hanging, on the back of the printing, an aluminium strecher frame.

As I will mostly send books in return, I must buy them. The average donation being 50€, I will probably need seventy contributors to reach my goal. Here are the expenses on the base of 70 KissBankers :

And if the collect goes beyond that amount, the money will be invested in more printings. The most, the best.

For the post-cards I give in return, I will pay for it.

Printings :  the printings will be processed as soon as I will get the money. The first exhibition being in November 2016 during the book fair "L'Inde des livres" being held in Paris.

Compensations : They will be sent as soon as I will get the books, around the first half of October.  For the photo printings, they will be processed and sent during October too.