If before dying, you want, at least once in your life, give everything for the orignal soundtrack of a 3D street performance show ! 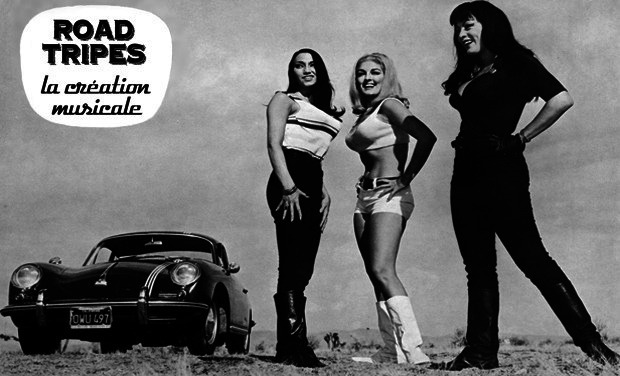 An explosive and feminine duet ( a Circassian and a Comedian). Mixes of road movie and western spaghetti, this rock and roll show will stage two friends who went off the rails and who gave up their daily round: their family, their job, to live freely in the excess...

What a program: everything that can make you feel good during this period of social and economic crisis: girls, sex and rock and roll!!!

Originally, this new creation Road Tripes was supposed to be articulated around songs of Supremes Dindes (of La Bûche, La Poutine and Femmes Divines albums ).

After meeting with Cécile Jarsaillon (singer-leader of the band Les Supremes Dindes and currently singer-guitarist in the band Vison), she was enthused over the project and made a commitment to compose all of the soundtrack for the show. The original soundtrack of this show will be worked like the music of a movie.  It will serve as electrical wire (main thread) for the show and the 7 songs will be gathered in an ALBUM which will be sold at the end of the representations.

This way, the public can go back home with the  music, being able to "replay" the show quietly at home.

- The artwork of the Soundtrack of Road Tripes.

And another clip of Supremes Dindes:

For eight years, we have been playing on the streets of France and all over the world with the will to meet people on the spot, locals but also organizers of festivals. We had so far chosen self production in order to remain free in our creation and our management of the company.

But today we are asking you to support us - you public- who have been following us faithfully for years. You may have seen us passing the hat around at the end of a show, in Chalon or in Aurillac. This time, we are asking you for a small advance of this hat in order for us to be able to create this musical adventure that we shall share all together Kitschnette, Cécile and you...

Kitschnette decided to dedicate the project of Road Tripes in two different budgets:

- And an other one different for the creation of the show

Here is how will be dividing the collected money:

€2500: Cécile Jarsaillon's salary as a composer and a musician

€250: return trips between Nantes and Marseille

€250: graphic design of the album cover and of the poster

Your name as sponsor on the company's website + a Kitschnette's bagde + a Road Tripes collector's stikers + the complete ALBUM (7 songs, mp3)

Your name as MAXI-sponsor on the company's website + a Kitschnette's bagde + a Road Tripes collector's stikers + the CD signed + an individualized and costumised sexy postcard + A PICNIC AT THE SEASIDE, IN MARSEILLE with the girls ( regarding the disponibilities and the weathers. Transport and accomodation fees not included)

Your name as MAXI-sponsor on the company's website + a Kitschnette's bagde + a Road Tripes collector's stikers + the CD signed + an individualized and costumised sexy postcard + A MYSTERIOUS NIGHT IN MARSEILLE (in a secrete place, with a secrete meal and a mysterious show...)

A CRAAAAAAAZY NIGHT with ALL the girls of the project in a LUXURIOUS HOTEL !!