Help us to achieve the 2nd edition of "Red Card to Female Genital Mutilation", we need you! 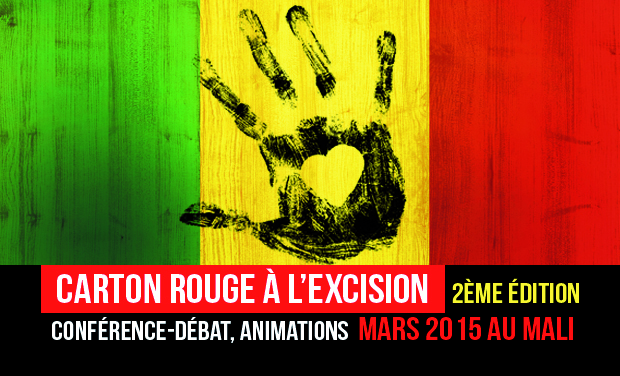 Foreword: The total project budget is 12 000 €uros. By helping us achieve this goal, you participate concretely to the realisation of the second edition of Red Card to Female Genital Mutilation in Mali, sensibilisation campaign in schools, for the abandonment of excision through education and culture

The campaign "Red Card to Female Genital Mutilation" of the association Mélodies du Monde has as a mission to contribute to abandon the practice of female circumcision, through information and sensibilisation through organizing conferences with players in the field: conferences debats (doctors, associations or NGO’s, representatives of the civil society, religious people, artists, politicians), film screenings followed by arts and cultural activities in schools, colleges and universities.   Here is an extract of the 1st Edition Red Card Female Genital Mutilation March 214 in Bamako-Mali:

Female Genital Mutilation is one of the oldest traditional practices of the Malian society. It involves removal of the clitoris and/or the little lips of the female genital device. Female circumcision is practiced in all regions of Mali. Why this initiative? Mali remains one of the most affected by the practice of female genital mutilation including circumcision African countries. According to the Demographic and Health Survey 2006 (DHS / Mali II), the prevalence rate is 85.2% among women aged between 15-49 years and 84% of 0-14 years. The leading practices are clitoridectomy (52%) and excision (47%). Infibulation is practiced little (less than 1%) and 2 out of 3 women interviewed for this survey planned to have their daughters circumcised. Despite efforts by the government since June 1997 to abandon the practice, 85% of the female population continues Being subjected to the practice of Female Genital Mutilation (FGM) in ESDMIV. The map below of ESDMIV gives prevalence of FGM / Female Genital Mutilation by region in Mali.

For several years, associations and NGO’s in Mali, fighting to end the practice of female circumcision, often these campaigns are held with the leaders, communities, political and religious people, which, in turn should pass the message to the people , which is not often the case. Moreover, in most of these sensibility campaigns, youth are not targeted directly. Youth are the future of society, as future parents, it is important for us to touch them directly with this issue, so this practice is perpetuated over time. When the first edition in March 2014 at the University of FAST in Bamako, Mali. We could measure and see, many pupils and students were also paid close attention to the issue of female circumcision.  Here is an extract of the 1st edition of Red Card to Female Genital Mutilation at the University FAST in Bamako March 2014:

Why do we need you now?  The association Mélodies du Monde has fully fund these humanitarian projects for already five years for a height of 80%, these funds come from the organization of various concerts and festivals held throughout the year. Due to abundant rainfall during the most part of our summer festivals in 2014, we have not been able to benefit from these events. Thus, for this deficit we have achieved our limits. Only your participation will allow Mélodies du Monde carry out the second edition of Red Card to Female Genital Mutilation Help us continue this adventure of sharing, engagement and solidarity!