In 2004, 30 years after massive tortures in Uruguay. A difficult topic? The kindness of testimonies give again a great hope. 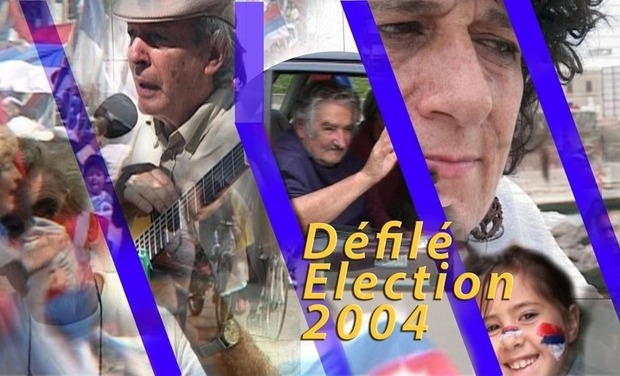 Help us to break silence!

This key project with my personal history, family, Uruguay, and human rights. I was rocked in the middle of the tanks, of the military excavations, removals then yes inevitably I am very impregnated by this tragedy. Lastly, it east what I believed before meeting 30 years, of which I was struck behind my camera those of which I had had nightmares such an amount of, “ex-tortured later”, indeed alive and full with life. Then, I could, reassured, tender the wire between the victims and their children. I have the age of their children. They do not speak step between them about this business. My different place east, my positioning at a distance which leaves a place to these very rich exchanges. I do not write step that “in the air” to sell. Because Uruguay - as the majority of the countries of Latin America - had the means to install dictatorships. I am aware that Uruguay east ignored an enough country. In addition, it there with commonplaces to the dictatorships then why speech of the experiment of Uruguay? I am obliged to tell you that - as in the other countries - the agent of the CIA daN Anthony Mitrione was charged to explain, to form in a very precise way torture. It east completely opposite for example of a surgeon highly specialized. After the formation, it assassinated after a debate on August 10th, 1970, its body at summer found in a car in the capital, Montevideo, 4 day after my birth. The military chiefs have fact an “ethical” choice: massive murder no but a simple and terrible sentence: “One will make them insane”. The practice of torture was the only means so that the “dissidents” slacken by the fear and the souffrance* their ideals political. Madly massive torture at summer. 1 Uruguyan out of 54 at tortured summer. It east almost impossible to find an Uruguyan without a member of his aye family tortured. A member of a family which with undergone torture spreads worst fears in all her family and her friends. This film with nothing glaucous. The many people whom I met testify, but they reassure us. It paradoxical and strongly fascinating east. Alas, I was first the “surprised one” of their vision as for torture, especially of the revolutionary group “Los TUPAMAROS”. I them judge step. On the other hand that creates a wealth and a precision with the report with the torture which east for the blow NEW. *La suffering: my personal definition of torture consists in bringing the vegetative and nervous system human at the edge of the vital rupture. Therefore they tortured in the presence of a doctor who allowed to leave in life the victim for a forthcoming interrogation. Indeed, a dead prisoner goes against ethics. Beyond my motivation, many films on the subject; This one different east because it brings by the almost poetic quality sometimes of the people humanly very touching. Yes, for a share it east paramount to denounce the acts of torture which take place still to date. Yes, the survivors of torture are in the not-choice to invent manners of continuing food, which master key by a certain creativity. These testimonies do not have step for goal to clear the responsibilities for the crimes of cruelty. It east an important glance and nine which will bring wealths to the future debates on this sad topic but good present in 2014 in too much many countries. I hope to have touched your sensitivity as for filmic quality of this project. I filmed many hours and I call on your support because French televisions found interesting the fort project but do not have step sufficient “documentary boxes” for the significant amount of projects suggested.   The motivation which with never left me, you can fly over extracts of them here: Scenario of the project of film (in format pdf) additional information and images by here! Why this return 25 years later? extract of the rushes of 2004: IFrame The immersed childhood of accounts of tortures, I installation then the question: how east this possible to impose of such prevails with another that oneself? This world human east it? Uruguay and its industrialization from tortures, 1 Uruguyan out of 54 with missing in tortures to reappear in the prisons of the military junta. The “machine”, thus named for torture east packed and east become insane. With the release of testimonies, writings are born. Then the need settles to continue to advance, to raise his/her children, to put this past which wounds the heart. Aggazi3 However, become parents and grandparents, they do not speak step about this odious past to their children, family or friends. It macabre east of speech? However, the children “of” know. But the communication established step between them on this subject. Writings it there of with have, of which read by? The particular madness of the inflicted maltreatments require years for makes it possible to make acceptable the accounts, on the one hand the facts exceed the understanding, on the other hand that the victims are rebuilt despite everything with after-effects.

It with been necessary that time makes its work power of speech and so freely. 3 decades, with the characteristic of Uruguay, testimonies of the survivors of tortures have surprised me to give testimonies if lucid and precise. It east before all silence around this topic between generations and so between victims which me with thorough to take the camera,

being eyes and ears of their children, their family. To dare to invest itself in a subject buried by the history goes from oneself for which knows Uruguay. Iskrafilms, TV channels, the CNC with found the project rich and interesting. However no financing through the usual searchs for support to answered present. Yes, I was shocked violence, the mechanization of tortures. David Campora told me that to have 200 “cops” to make you shit, with you only, any moment of the day and the night, yes, that you tiredness, it east as if they corroded you the heart with long.

Which interest to support this film? - For the power of testimonies, their incredible precise details, which I am sure, will encourage the spectators to be mobilized and ONG to be supervised of advantage in the current world, the countries where one allows oneself to torture. - Because speech of tortures such as they make it without does not demoralize step to fall into the banality, the right distance, it east from there that they speak to us. - Thanks to you, power to hear them, will give another image thanks to the retreat of time to the rebuilding of a country after this long passage too much human shame.

Pinochet and Argentina to which the media turn of share the popularized through the media lawsuits. To dare speech of a typical case in a small country three times that France often unknown request an open-minded but and so a winner bet. - It east if small this country that the many torturers cohabit with the population… - Especially because tortures make dumb, it east one of the “functions” of these maltreatments organized pointilleusement. Which child will ask his parents, you tell us?? - The Second World War, tortures in Algeria and elsewhere have fact of evolving “the techniques”, it irresponsible east to divert the eyes vis-a-vis these schools become “Master degree” or “researcher” in techniques out the law. - Courage to support this project so that the howls of tortured do not disappear by voluntary silence.

What remains to be financed?

I left into full presidential elections in 2004, then the writing of the scenario supported largely by the team of Iskrafilms, took much time to me. Maintaining the stage is: the Assembly of the rushes, translation in French, English, the post-production. I wish to create spaces of discussions, which, thanks to the projection of film and the presence of speakers, the search for practices prohibited in the world evolves in its approach. Because at the same time, a book will come out so much testimonies are strong.

If the project arrives at 1 800 €, “First part, editing in original language”: That will be able to pay the editing who will have becomes him 50 hours of rushes. It will have a time limited to make emerged the force of film. The translation in French seems too right. That will allow from the start to touch certain ONG like making possible a round to Latin America of film.

With 3,000 €, “French translation”: The art of subtitling and its installation on the timeline. From here, projections in France will be at the point. Spaces of debates will be able to be organized in France.

With 4,000 €, “English translation”: ONGs, speak almost exclusively in English. This stage, the film becomes international and will be able to go the world. The debates could be born with much more impact.

Above 6,000 €, “To support the underfed Uruguyan children”: If your enthusiasm manages to exceed this sum, much projections and sales of English books, French, Spanish (above) will be used to support the current government in place to fight against the extreme poverty of much of families living well below poverty line. I hold informed of all the projections and answer all your requests relating to this project through a “book of edge”. I warmly thank you for your support, thanks to you a hidden word will be able to be born and make it possible to widen the field of the reflection-prevention. Childhood invaded by want to represent me torture in my imaginary. This film is the little brother of this second project, double voyage and confrontation: my imaginary and the reality of torture the present stage of the project is to find a financing so that a Spanish assembler of mother tongue can bring his glance on the rushes. Since there is at disposal one fifty of hours of rushes, it will take him several months (undoubtedly 4 months) to rebuild the history through this bosom of words, to make it available and universal. The success of the torturers despite everything is in the destruction, the tear between the generations. What do you have make these 17 last years? Er, what to answer?? Then silence settles, thanks for helping to break the barrier to leave room with the word and testimonies. While making circulate this project, you already contribute to break silence and to give the right importance to this infamy with regard to the human rights.