Together, let’s make the best documentaries of the most amazing international fixed-gear race. THE RED HOOK CRITERIUM 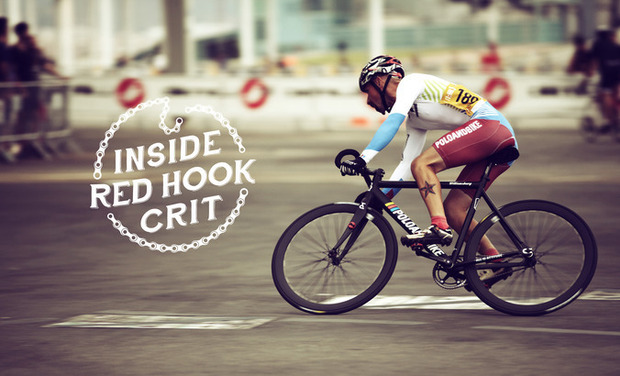 THE RED HOOK CRIT. IS THE RACE FOR ALL FIXED-GEAR AMATEURS & SEMI-PRO COMPETITORS

David Trimble and soon became a must-ride. A criterium is a bike race held on a short circuit. Laps vary

concentration matter. The fixie bike trend has invaded the streets.Since the birth of the criterium even

indoor competitors are leaving their beloved velodromes to ride urban circuits instead.Originally there was

only one race.Now, given the increasing number of participants – riders have to pass certain criteria to get

through to the final race. Only the best 85 riders will participate in the race.

FROM BROOKLYN TO THE WORLD…

2013: Barcelona edition was set up

In 2013, the team shot its first documentary: the Milan edition.

The film was self-produced with passion, sacrifices, generosity, pocket money and resourcefulness

And confirmed an incredible interest for the topic and the huge audience behind the RHC.

More than 180 likes on Vimeo

46 shares on FaceBook only via Red Hook Crit page. 20 shares via the Don’t Do page and many others

More than 70 likes after the release of the film oon the Don’t Do fan page.

For the first edition, at the end of March we will follow the Stanridge Cycles team with Katie Arnold and d'Evan Murphy, true legend of RHC.

This year is also the first time that women have their own race. They can finally compete with each other. It's finally recognize their ability and level.  Follow Katie and Evan, is a guaranteed to put forward the performance, technical but also unusual personality.  Follow Stanridge does not just mean putting forward a brand, it is also and above all related to the artist Ben Eine universe with which the founder, Adam Eldridge has a long history. In addition to this quality collaboration, we must recognize Adam excellence of his work. He handcrafts all of its frames.

We want to capture the unique and intense atmosphere of the race – the riders – spirit of the city, introducing the race to a wider and non initiated audience.

Through the eyes 1 team, present the race as a true discipline – not just a trend for hipsters.

Introduce true & high-end international athletes and their touch of “craziness”.

Show the world what RHC really stands for? Why is there so much interest in it? What makes it so

unique & specific? Get all the answers through interviews with the main Red Hook Crit riders.

Immerse teams and friends in an incredible atmosphere and spirit, during what will be a unique journey;

over the three days, cyclists from the world over will all be in one place, together.

In each city, follow local riders and discover their RHC. JLike a shadow following their every move,

capture all the emotions before, during and around the race: preparation meetings, backstage, key

Its race, its atmosphere, its scarcity and its performance are the elements that have triggered the craze

Film length: 6 - 7 min. It’s essential to keep a certain dynamism to captivate the spectator. One rideror 1

team following over 6-7min is enough to know all we want to find out about him and his life.

DON’TDO IS A HYBRID ASSOCIATION OF TALENTS SPECIALISED IN FIXED GEAR:

A CREATIVE TEAM, A PRODUCTION CREW, AN EVENT ORGANIZER.

since many many years – Based in France but going everywhere where fixed gear is happening.

Yann Goradesky is part of the “Surplace” crew. Surplace is a blog about news and events happening in

Jean-Baptiste Le Van aka Félix Fander is a rider and has already participated in several RHC.

Caroline Pauleau is a blogger, a creative director and a photographer.

For the last 4 years, her blog - Paulette à Roulettes (Paulette on wheels) – has been all about events and

main players of the fixed gear and bike polo scene around the world.

As an art director (advertising) as well as a photographer, her skills give her blog a unique feel and

We’ve been around the world to take part in as many cycling events as possible.

By doing this we have built strong relationships with urban biking community.

We know how reach and approach the riders.

We have attended RHC editions since 3 years ago.

We have a team, a director, a photographer, an art director, 2 DOP, a sound engineer and producer

ready to go and follow the RHC throughout the 2014 season. We also work with InDaProd, a production

Cedric Dubourg, the director for the Red Hook Project, has been chosen for this experience, thanks to

his abilities and and experience in managing and supervising athletes.

The collect will help us to afford our first travel to New York to achieve the first episode of those 3 documentaries. the equipment is provided by InDaprod

We are 5 people to travel

Tickets from Paris to New York

Accommodation for 5 persons during 6/7 days

We need to raise 6 000€ minimum to gave us the chance to do this project that we like so much? We trust on it and the entire fixed gear community waiting for us and our next film. We can't disappoint them.

If, by lucky, we get more than 6 000€, we could be a better production and post production and mainly we could start to think to the 2 others films about Red Hook in he next cities Barcelona and Milano.