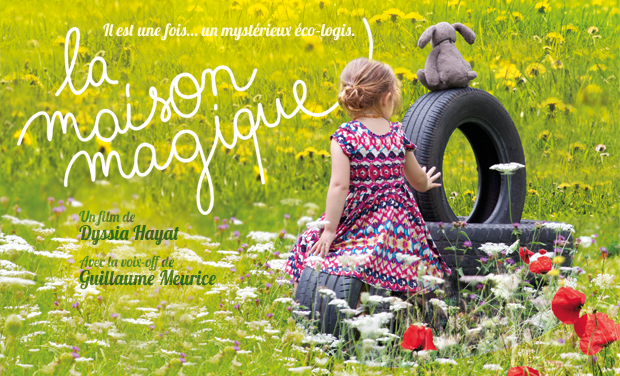 This summer, we had the chance to witness with our cameras, the building of… a magic  house : an extraordinary project. Not only is its incredible structure built out of waste (used tires, glass bottles, or soda cans), but it is completely autonomous and self-sufficient (electricity, water, etc.). It even produces food!

Dyssia, the director, wants to tell you this story in the form of a tale, through the eyes of Nohéa, the little 3 year-old girl who sees the building of her future home: The Magic House.

Convinced that the minds of adults are often too formatted and that prejudice prevents them from opening themselves to innovations, she thought that it would be more poetic and effective to address the "child" that lies dormant in us. Children are actually more rational in the face of the absurdity of the world. They are more apt to listen and understand what is good for them. Dyssia has offered Guillaume Meurice, a comedian and columnist on Radio France Inter, very committed to protecting the environment, to join the project.

For a month, we saw this amazing project of habitat rising in front of our lens in the heart of the Dordogne region. The project of a committed couple, Benjamin and Pauline, settled in the village of Biras near Périgueux in the green Périgord. Four weeks during which a hundred people from all over the world participated in the construction of this young family's nest.

Structure wall in tires and inner wall in soda cans.

Aerial view of the site on D+7!

More than 70 participants, representing 25 nationalities, came to live this extraordinary adventure and to be trained at the "Earthship Academy". Supervised by fifteen professionals from "Earthship Biotecture", they returned to school every other day to take the theoretical courses, before putting them into practice the next day at the construction site.

Michael Reynolds, creator of the concept of Earthship, (right) packing tires with an academician.

Some academicians had never done DIY before, others were more experienced. Together they shared unforgettable moments in the campsite organized for the occasion on Benjamin and Pauline’s plot. They ate, slept, and learned to know each other on this piece of land where the utopia of a better world became reality.

It is the story of these "two adventures" that go along in parallel that we would like to tell you. On the one hand, the construction of an autonomous and self-sufficient eco-house which is a concrete solution to the environmental and political problems that surround us. On the other hand, the more figurative construction of these academicians transformed by this unique experience where they learned to work together, collaborate, co-build. They have also been enriched by their diversity and their different paths.

The Origins of Earthships

In the early 1970s, in the midst of a hippie revolution, Michael Reynolds, a young American student in architecture, feels very concerned about environmental issues and the impact of men on the world around him. He decided to start experimental alternative constructions with a single idea of common sense in mind: rather than spending energy to produce building materials, why not recycle the waste produced by a society that over consumes. Used tires, glass bottles and cans will become his best allies.

After several attempts and experiments, he built the first Earthship in 1979 in Taos, New Mexico where he settled. Little by little, several people who adhere to his way of life, joined him. From then on, Reynolds never ceased to perfect his ideal to be independent of a system he considered alienating and to answer different questions of sustainable development.

He eventually succeeded in building self-sufficient homes with "smart architecture" principles, able to regulate their temperature and produce enough to feed an entire family with fruits and vegetables grown inside them.

An Earthship in Taos, New Mexico.

Today, more than 70 Earthships on nearly 640 hectares constitute the community of Taos called "Community Earthship of a Better World". More than 2,000 other Earthships represent this movement of resistance to over-consumption polluting societies all over the world. And in 2011, Michael Reynolds created his Academy to train people around the world and pass on his know-how.

What is the Academy?

In 2011, after more than 40 years of developing his model, Michael Reynolds organizes the next generation by creating what he himself calls his "Army". In Taos, in his "Better World," he opens an Academy for these ecological soldiers ready to travel thousands of kilometers and spend a few thousand dollars to know all about these self-sufficient habitats: from the history of Earthships, to the theoretical and practical courses of their construction, to the maintenance of the orchard, not to mention the various humanitarian projects. At a rate of about 6 sessions per year, the Academy has trained more than 1,200 students from all over the world.

In 2017, the Academy moves to Europe for the first time in its history by settling in Biras (Dordogne) on Benjamin and Pauline’s construction site.

Cross-section of a Earthship global model.

How does an Earthship work?

- Construction is carried out through the use of recycled materials. 40% of the building is erected thanks to used tires, cans and bottles ...

- Passive heating and cooling / Solar and wind power. The Earthship is heated and refreshed largely thanks to the principle of thermal mass which consists of accumulating heat in winter and coolness in summer. The Earthships are also characterized by the principle of passive solar (south facade fully glazed to maximize heat and north façade buried underground to minimize losses). Most of these homes are off grid because energy is produced thanks to alternative sources such as wind turbines and solar panels.

- Water collection and wastewater management. Earthships do not require water distribution systems since they are equipped with tanks to collect and store rainwater that will then be filtered. The waste is reduced by a phyto-purification system.

- Production of food. A vegetable garden is planted all along the bay window, thus benefiting from heat and sunlight. It is fed by the reprocessed waters.

The greenhouse that welcomes the vegetable garden.

Such principles respond to the ecological emergency, but also to the social emergency. Thanks to these constructions, the secure feeling of having a roof, all over the planet thanks to the use of materials that litter the floors everywhere, and of living in a warm place and having food without worrying about the invoices, is pretty reassuring.

The roof of the house semi buried on the North face.

Presentation of the family who built the Earthship of Biras

Benjamin, in his forties, and Pauline, in her thirties, have been in a couple for more than 8 years now. They are the happy parents of Nohéa, 3 and a half years old. For five years, they lived in Los Angeles. Pauline graduated from the University of UCLA with a Master in Sustainable Development. Benjamin is a journalist. Both are very committed to environmental issues and are trying to apply everyday gestures that allow them to respect the planet without ever being completely satisfied. One day Deborah, Pauline's best friend, talks to them about this new company she works for in New Mexico. The couple decides to go there. They discover the Earthships. When they return to France, convinced that the ecological emergency requires a change in our way of life, they cannot picture themselves living in a traditional house. They have only one idea in mind: build their own Earthship to raise Nohéa in.

Benjamin, Pauline and Nohéa in front of their future Earthship.

Dyssia Hayat, the director, wanted to tell this story in the form of a tale through the eyes of little Noah. Convinced that the minds of adults are often too formatted and that prejudice prevents them from opening up to innovations, she has thought that it would be more poetic and effective to address the "child" who lies dormant in us. Children are actually more rational in the face of the absurdity of the world. They are more apt to listen and understand what is good for them. Guillaume Meurice, who embodies the voice of the skeptical adult, is a comedian and columnist on Radio France Inter. Very committed to environmental issues, the actor immediately agreed to join the project.

Behind the cameras, Benoit Prigent, a graduate of film studies at Paris 1 University, spent almost a month with the director on the job site. Benoit discovered the Earthships during a filming in Taos, New Mexico for Arte Creative. A web-documentary entitled Music on the Road (2016), which he co-directed with Yoann Le Gruiec, and which takes the form of a musical raodtrip across the United States.

Alexandre Lemoine Courx also participated in this adventure as the chief operator during a few days.

Many thanks to our two film editors, Vincent Valluet for the teaser with Guillaume Meurice, and Nicolas Gazeau for the trailer.

Finally a very big thank you also to our production team who trusted us and who allowed us to shoot in the best conditions: Laurence Lafiteau, Roméo Cirone and Kevin Hamon from Sertis Production.

We also thank all those who have been helping and supporting us everyday since the beginning of the adventure of the film! And especially you, without whom we can not carry out this project well!

We are an eco-responsible film production and we do this project with respect for the environment. From carbon evaluation to actions to achieve through the check-list of good practices in the office, we commit ourselves to this virtuous approach for a sustainable film with good gestures on a daily basis on the set and during the whole production!

Our dreams of a better world become reality ...

The press review (not exhaustive)

-   Interview of Benjamin Adler in the show « Local’actu » sur radiolibreenperigord.com

Today, YOU can also participate to the adventure!

By contributing to this project, and helping us raising money, we will be able to finalize the shooting, edit and distribute the film. Above all, your action will promote the idea of a better world with durable solutions, and you will participate to a widespread message that a sustainable life is possible. The waste can be a resource... that fossil fuels can be substituted by green resources...

Be convinced, every gesture is important small or big ...

Everyone can commit themselves and lay their foundations to the building:

- with a donation on this site. And have the opportunity to get some great rewards.

- talking about this project around you, to your friends and family, and of course through social networks. All together we can be stronger to build a better world.

#THANK YOU in advance for your donation and moral support!

The donations will be paid in full to the bank account of Sertis Productions for the financial management of the project and the distribution of the costs according to the budget split and the priorities of the production (wages, management, technical ...).

Research of institutional partners and associations

Realization of the video teaser for Kiss Kiss Bank Bank

Writing and editing the trailer

Shooting in the community in Taos New Mexico in winter 2017

Promotion of the film on networks, festivals, professional circuits

Application for production aid to the CNC Against parties KKBB

DCP of the film for theatrical release

- Realization of the teaser, trailer and file KKBB: September 2017

Your name in the credits of the film

Your name and photo in the credits of the film

Previous rewards + invitation for 2 persons at the preview

Previous rewards + guided tour of the house with the owners