Help an explosive musical project to take off! 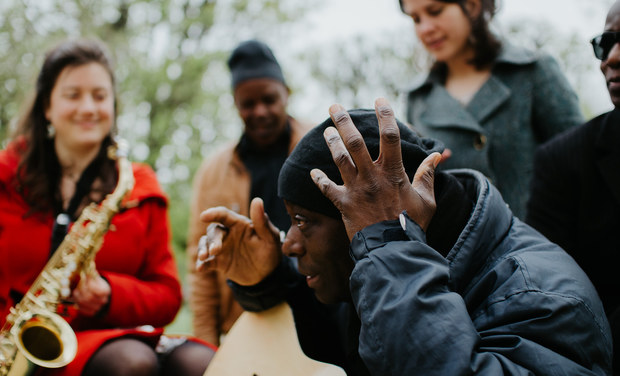 "Le 13ème son"- The thirteenth sound - is the story of a wonderful human and musical adventure: a meeting between men at "La Mie de Pain”, a shelter for the homeless in Paris who have become fully-fledged musicians.

They have found ways to combine their differences and give themselves strength, showing us through their songs a new way to see those who lead a precarious existence at the edge of exclusion.

The adventure began in April 2016, when two social workers from "La Mie de Pain", later joined by an outside musician and an educator, decided to open a weekly music workshop for residents of the shelter. This started off as a relaxed place to learn various vocal and musical techniques, but soon changed into a must-attend event for a dozen residents, both musicians and novice music lovers, who learned to listen to and help each other, ultimately creating their own colorful musical repertoire.In two and a half years, the band has performed in public ten times, first at the shelter itself and then at various outside events, notably at two festivals in the Paris area, "La Terre est à nous" (Nanterre, March 2018) and "Festival des murs à pêche" (Montreuil, May 2018.) In October 2017, thanks to la Mie de Pain, "Le 13ème son" recorded its first composition: "Malgré tout" (Despite Everything) in the various languages of the band-members (Wolof, Kabyle, Yoruba, Lingala, Cameroonian). This song speaks of love and suffering, but also the hope that keeps everyone standing upright despite exile and the distance separating them from their families.

In May 2018, "Le 13ème son" association was created to encourage artists of different social and cultural backgrounds to mutually help each other by organizing, running and participating in cultural events, as well as producing and promoting works by the artists themselves.

As a young association, we don't yet have a budget and most of us don’t have our own instruments. We no longer have the use of a rehearsal room.

Help us to take off, we need your help to continue this adventure !

We need your financial help to be able to continue the adventure, so that we can

- Go on a short musical trip to the countryside in January 2019 so as to compose new songs together: 500€ for a long week-end

- If we can raise more than 4000€, we would like to record a sample tape of our most beautiful songs, for the sweet and wonderful pleasure of your ears! 500€/song