4 concrete, imposing, disturbing sites. One documentary on the architectural heritage of the 3rd Reich in Germany 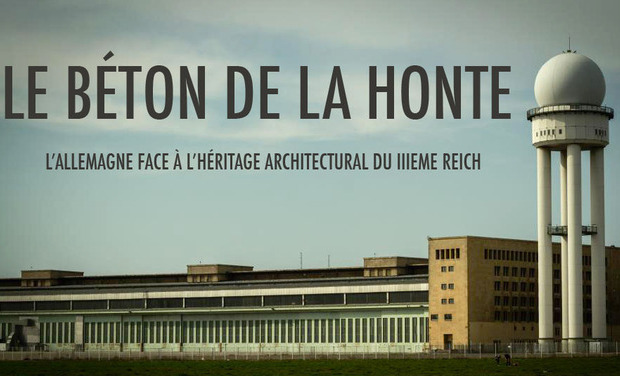 One bunker, a mountain, a bar of buildings, and an airport. Four sites built during the 3rd Reich in Germany, four sites that impose themselves on the German public, the government, and the countryside. The documentary, Guilty Concrete (or Le béton de la honte) , transports us to the remains of Hitler’s bunker and the Tempelhof Airport in Berlin, to Obersalzberg in Bavaria, and to the city of 20,000 on Rügen Island. Whether partially destroyed or still standing, these emblematic sites of Nazism raise problematic questions about management, finances, urbanism, and memory. Now approaching the 70th anniversary of the end of the Second World War, Germany is still facing an embarrassing architectural heritage.

Though a number of buildings and sites built by the Nazi party were destroyed at the end of the Second World War, many still dot the German countryside. A number of these sites were quickly given a new life,  like the Reischbank, which became the Ministry of Foreign Affairs and the Ministry of Aviation after the war, and is now the Ministry of Finances. Counted among the more successful transformations are the Olympic Stadium in Berlin, or even the Studio Babelsberg where Tarantino shot Inglorious Bastards in 2008. Other buildings of this era are more problematic as a result of the symbols they represent: the entryway to the Führerbunker, the bunker in which Hitler committed suicide, is condemned and inaccessible to the public, and the Berghof of Obersalzberg, the second residence of the nazi dictator, is left in a state of ruin while a luxury hotel is trying to repair the area’s bad reputation. In other cases, the size or locations of these sites pose different problems, like the Tempelhof Airport located at the heart of Berlin, or the City of 20,000 on the Baltic sea. Classified as historic monuments, these sites cannot be destroyed. Unassailable, giant, and costly, they impose themselves on the tax-payers and public offices and prove to be a real puzzle: how should these sites be integrated into today’s urban landscape, especially given the financial restraints imposed by the economic crisis?

Using these different examples, we want to explore what questions these sites raise, what solutions were found, or which ones are envisioned for these sites built during Germany’s period of national-socialism.

- Do we have ethical responsibilities when dealing with these German sites?

- What are their cultural statuses? Are they all historical monuments?

- Is there a risk of erasing the history and memory of these sites?

- Can we build tourist attractions on sites charged with this history?

- How do we manage these sites given their costly upkeep?

This documentary is not about Nazi architecture, nor is it a comprehensive list of the vestiges from the era. We rather want to question the existence of these sites and their presence in the building of Germany today and their place in the Germany of tomorrow.

With your help, we’ll be able to finance the following.

- Lodging for 2 nights in Berchtesgaden and 3 nights in Prora for 2 people = 600 Euros.

We will cover the following costs.

- Costs of food Other travel costs

- Thank yous for your contributions to our KissKissBankBank campaign.

If we surpass the amount we’re asking, we will use the money for the following.

- Offer a compensation to the musicians included in the documentary’s soundtrack.

We’ll also use our own equipment for production: