Help finance the CD of SHOWTIME a musical by the Company I.D.A. MARK TOMPKINS 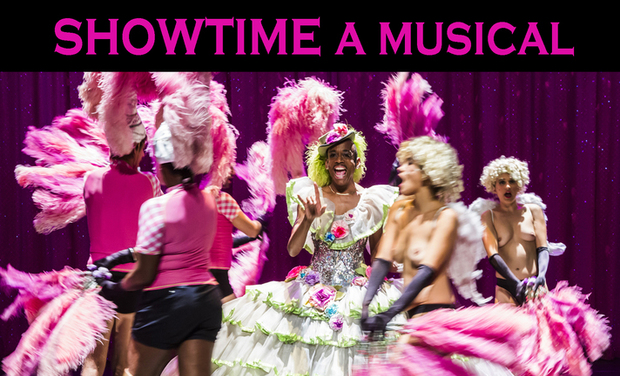 The Company I.D.A. Mark Tompkins has been making dance and theater performances for thirty years. In 2013, it created SHOWTIME a musical with original music from Mathieu Grenier and Mark Tompkins and a cast of eight dancers, singers and actors. To share these songs with more people,

the team is recording a CD of the show.

The 15 songs, influenced by Broadway, but also rock, blues, jazz and soul, are both popular and refined. The texts, full of ambiguity and wordplay, resonate with the themes of identity and gender troubles.

SHOWTIME is a contemporary musical that plays with the codes of musical comedies and TV talent shows. The piece portrays a group of individuals engaged in making a musical revue, from the audition to the show. The trajectory is not easy, and full of clashes and conflicts. But the ego crisis', the exhaustion and the artistic demands will be transcended with humor and a good dose of crualty, through song and dance. The finale in front of the pink sequin curtain connects the great Music Hall tradition, including authentic costumes from the Folies Bergère.

SHOWTIME a musical was created October 8, 2013 at the Filature, Scène Nationale de Mulhouse, and presented at TPV / Grande Halle de la Villette in Paris and La Maison de la Musique de Nanterre in 2014. The next performances will be in January 2015 at Théâtre de Mâcon and the Théâtre de la Croix-Rousse, Lyon.

SHOWTIME is a successful and bold exercise in style…   A great repertory whose titles celebrate difference, the respect for others and the love of Music Hall.

SHOWTIME is a delectable show, Oh how euphoric…  a declaration of love to the inventiveness of the revue numbers, a joyous celebration on the stage of song and dance.

All the performers abound with talent, dancers, actors, singers…  It’s perfect...and so funny!

The magic of live performance operates. We go from laughter to sincere emotion, from a gag…  to rejoicing. A remarkably constructed proposition, conducted briskly.

We are going to record the CD of the performance SHOWTIME.

Any excess will be used to finance the rest of the budget.

THANK YOU IN ADVANCE FOR YOUR SUPPORT !

PHOTO, CD, DVD SHOWTIME, DVD kings&queens, CD of Mark Lewis and the Standards, signed, 2 INVITATIONS to the show + champagne date with the team after the show