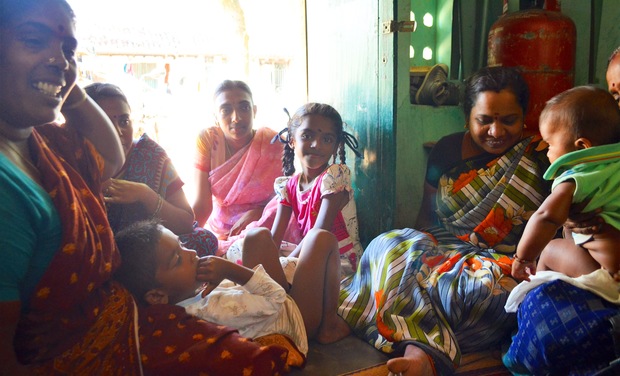 Our project is to build a documentary that will keen interest in Indian women living in Tamil Nadu, South India, especially around Pondicherry. The aim of this documentary is to highlight not only their living conditions but also to show the discrimination they are facing in their daily life.

Our purpose is to give them a voice so they can be heard. To do so we will accompany associations they already know, which work to improve their daily life, give them access to independence and help them reach equality. Therefore, our aim is to show the actions of these locally implanted associations that fight in their own ways against these discriminations, obstacles to reach dignity and their efforts to remedy these issues in a society where these topics have been neglected by public authority.

The community network on this matter in Pondicherry is quite thick: associations, foundations, social and interdependent company, non-governmental organizations… Our documentary will be concerned with the different way of working of these organizations, their purpose, goals and the women’s audience they are targeting.

How do they act? What needs are they trying to work for? What difficulties do they face? We’ll try to answer these questions and more throughout this documentary

In a study published on September 11th 2018, by the Scientist British Magazine The Lancet, we could read than more than 1 of 3 women who commits suicide in the world is Indian (37%). This figures is especially high regarding married women who are less than 35 years old. According to the research worker Kamala Marius, the importance of Indian traditions whereas the country is opening itself into the world has a role especially due to the economic growth: “With the rise of life standings, there is a bigger opening to the world which is now possible and so the awareness of what we do not have compare to others”. Arranged marriage, premature, dowry weight, isolation, domestic abuses… There are many elements that weight on women’s conditions.

Women who are at the junction of different power correlations due to their cast or their sex, the “Dalits” or “untouchables”, found themselves particularly vulnerable. For these women who lives in poverty, access to education, employment health, banking system and to other services becomes a permanent fight. They are socially excluded from Indian society and can’t enforce their rights.

If India knows an exponential economic growth, women are still on the fringe of society with an employment rate that keeps turning down for 10 years. Moreover, revenues disparity are very important and conditioned women in precarious jobs. OECD points that in 2012, 60% of women with a permanent or non-permanent job would earn less than the minimum wage against 25% of men.

What will be the purpose of our documentary?

Our documentary is destine for a French audience: our goal is that our film will be broadcast at events or pubic manifestation in order to promote women’s rights or local development. We would like to reach out to associations, arts cinemas, or even a young audience in primary or high school that could be interested.

“Les yeux des femmes” (Women’s eye) is an association with a non-lucrative purpose created in September 2018, controlled by 1901 law.

The association aims to promote equality between women and men, fight against discrimination based on gender et further local development.

Léna, founder and president of the association:
She is behind this project, Léna is a feminist militant, graduated from Sciences Po Toulouse. In 2018 she lived 6 months in India where she did a “civic service” in collaboration with the Association “Credit at People”, partner of the current project, therefore she has already worked for women who benefit from local actions in favor of the local development of the region.

On this project she is in charge of building the documentary, from the writing to the shooting and monitoring the local partners associations. She will also do a 2 months voluntary work in one of the organism associated with the project (Village Community Development Society).

Marine and Léa, general secretary and treasurer of the association:

Marine (on left hand side) and Léa (on the right hand side) are respectively graduated from a Master in medias communication and in social politics for equality between women and men.

In this project they are in charge of the partnership researches and promoting the documentary for French and local medias and associative sector.

Ludovic used to be a graphic artist, retrained himself and now is an independent video maker. Voluntary on this project, he will be in charge of the shooting in India and of the editing of the documentary.

Margaux is graduated in foreign languages. She will help on the project in order to find associative partners in France and will help translating the documentary.

French foundation created in 2009, Credit at People grants microcredits for women living in country around Pondicherry. These lawns are destined to give them the opportunity to buy a dairy cow and maintenance materials, this allows these women to gain revenue thanks to milk sales. The association organized training session and follows up on a weekly basis for the lawns recipients, in order to help them with administrative tasks such as accountancy, and support them in their daily life.

To learn more about Credit at People : http://www.credit-at-people.org/

Ecofemme is an interdependent and social company which produced ecological sanitary pads, washable and recyclable. Ecofemme has multiple goals: their idea is not only to alleviate the needs in terms of menstrual health by handing out free sanitary pads to destitute women but also to educate and raise awareness women and teenagers regarding their bodies, beginning by their menstrual cycle.

In a country where 74% of women still use linen as hygienic protection, this social company take charge of a real sanitary problem and act in order to break up menstrual cycle taboo in India.

Adecom Network is a non-governmental organization that acts for oppressed women in south India for more than 25 years. Their field of action is diverse: country development throughout learning session (Sewing, IT…), consciousness rising and support of women stemmed from oppressed community or caste. Adecom Network takes a stand against domestic violence on women. On the first end by setting up a shelter for the victim and on the other hand by rising awareness among children and especially young boy in order to reverse social patterns that lead to domestic abuse.

VCDS is a member association of the NGO Emmaüs International. The organization intervenes among underprivileged social classes, mainly from untouchable caste. It also acts for children in order to help them access education through night school and militate for women’s rights and their social and financial independence and acts for local development as well.

Observation of the different associations for several and organization of a shooting schedule.

Selection of people that will be interviewed, choosing settings of future documentary scenes

End of April: Ludovic will get back to France

Broadcasting of the documentary

What is the founding for?

Our project comes with an important cost: Transportation, material, Visas, accommodations, insurances, associative fees… Unfortunately we cannot bear these cost completely. This is why we call for your help so this project can happen.

Our fundraising’s goal is to take care of necessaey cost of the filming in India, which means living expenses on site and travel costs which lift at 5000€.

400€ per person/per month of living cost on site including: meals, allocation et motorcycle renting (3 months for Ludovic and 6 months for Léna) ➔ 3600€

Les Yeux des Femmes association will perceive the total amount of the fundraise. We’ve already (or will) taken care of additional fees such as:

Fees due to the association management (creations costs, banking costs, insurance): around 200€

Communication cost of the project (leaflet and posters printing): around 40€

Every donation is tax deductible up to 66% of the total amount. Which means that 100€ donated is 66€ less on your next taxes.