Historical background of the project, how it all started

In order to create this out of the ordinary project, a “duo”, composed of the architect Bernd Hoge and the visual artist Ursula Kraft, associated under the name of HKarchiPlus.

These two protagonists also created the initial art work together, «Time Tunnel», an image and nomadic soundspace, designed for the public space.

Installed for the first time in 1992 with the artists’ collective Argonaut in Stuttgart, Germany, the architecture bestowed the art work not only its sense of autonomy but was also an integral part of the artistic conception of the project.

Our attention remains on this atypical architecture, made-to-measure by craftsmen.

Designed as a “construction kit”, the space is built up by curved wooden sandwich panels bolted on to a structure of metal arches. The panels thus becomes both static and structural.

Also the constructive modular system allowed different future adaptations, since the end of the exhibition « coeur expo » in 2003, the structure remained in containers.

In spite of many attempts in the cultural environment, reduced finances didn’t allow new presentations. Today, in order to save this important structure of this Gesamtkunstwerk, we have decided to give it another future by repurposing it. The conversion of the exhibit space into living spaces is, with its definitive implantation on a chosen site, the end of the journey, kind of green haven, called the « hamlet of the glow-worms » = "hameau des vers luisants"

From art work to ‘living differently’

« Hamlet of the glow-worms », three habitations of different sizes

The constructive modular system allows to divide the length of the tunnel into three detached houses of different sizes (Small, Medium, Large) and adapt them to the site. The project fits itself in with respect of the natural characteristic of the site and an eco-design approach.

« Hamlet of the glow-worms », implantation on the site of Cours/Grimault, in Bourgogne

Our starting point is to breath a new life into an actual art space by converting it into living spaces. Conserving the value created during its initial realization, by giving it another use, is for us another form of « recycling » and of rescuing a cultural heritage.

We think that this project corresponds to a generation sensitive to alternative approaches, in an eco friendly environment, and with an appreciation of contemporary spaces, far from stereotypes. By this logic, the three detached houses will only be built on spots of the site, previously occupied by a small business, and preserving in this way the protected natural spaces around it. To live in harmony with nature has become a value, a « green lifestyle ».

in an eco friendly thinking

Where ? The Hamlet « of the glow-worms »

The hamlet « of the glow-worms » is located in the little village of Cours, belonging to the municipality of Grimault, department of Yonne in Burgundy. Only 2 km from Noyers-sur-Serein, with the label "one of the most beautiful villages in France ", situated in a natural environment and in a complete calm, the site remains easily accessible within proximity of the A6 Sun highway exit 10 km away.

Only 2 hours from Paris, it has a privileged central location to discover Burgundy and its remarkable sights.

Noyers-sur-Serein, with the label "one of the most beautiful villages in France "

A natural site preserved and protected

Located on a plateau with a surface of 2300 m² and a beautiful view of the valley of Serein and surrounded by a protected, tree-filled zone of 6800 m², this « natural reserve » around the plot creates a privileged situation, a sort of« green cocoon », preventing any other construction in proximity. Making the most of the natural slope of the property, the patios of the homes do extend outwards into the trees and ending with an observatory-hut.

View from the « Hamlet of the glow-worms »,

Habitat L of « Hamlet of the glow-worms »

The three homes share a common driveway but are separated by gardens as well as a planted vegetal screen. The orientation of each house, with its large glass windows, allows a magnificent view of the valley.

Habitat S of « Hamlet of the glow-worms »

The total living area of each house varies according to its design: S, M or L.

In its conception, functional spaces are optimized in favor of more generous common areas. The arched shape adds an organic atmosphere. Skylights allow zenithal, punctual lightning of the space, completed by lateral extended openings. The shipping containers become technical rooms, forming a thermal airlock towards the inside.

Habitat L of « Hamlet of the glow-worms »

Habitat M of « Hamlet of the glow-worms »

Why do we need you?

Since it’s a project that doesn’t conform to pre-defined cases and, given that HKarchiPlus is not a commercial entity, the banks won’t extend the project any credit. Hoge architects, as well as Bernd Hoge and Ursula Kraft in person, have already given money to the project to allow the purchase of the land, to ship the containers with the structure and to begin site work with the setting up of the structure for the first two homes. So already 60% of the existent structure has now been saved. But to continue moving forward, HKarchiPlus needs your support as the construction activity is currently suspended due to the lack of funding.

To see the light at end of the tunnel… support us !

What will the fund-raising be used for?

The goal is to finance the completion of the smallest unit, the habitation S and later on, habitation M. Seen the progress of the work, this step is quite achievable. This will allow the possibility of seasonal rentals and to pay off the money lent by friends, but also to make them available in exchange for crowdfunders. Moreover, the first finished home could be used as a showroom for the next to be built.

construction site « Hamlet of the glow-worms », progress of work habitat

The sum of money to collect To reach this first objective

We were able to finance the purchase and the levelling work of the ground, the shipping of the containers with the structure as well as the assembly of the structures S and M. Distribution of water and electricity to the site have been prepared and airtightness and interior design will be the next steps for habitations S and M. Our first objective is to finish habitation S, and if we exceed the funds raised, we could address the completion of habitation M.

For the completion of the first habitation S and the land work (distribution of electricity/water, sanitation, plantings) included, we need 79 000 €. Given that friends have consented to loan 45 000 € we need to raise 34 000 € plus the provision 36 720€ by crowd-funding. 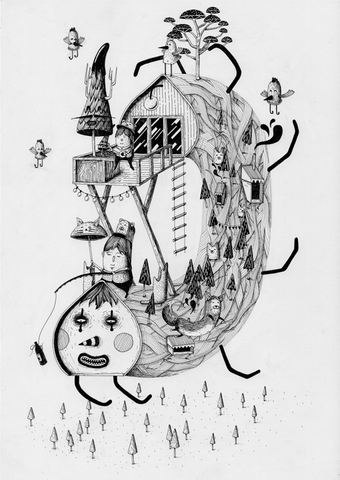