Help us recording our flagship programme! 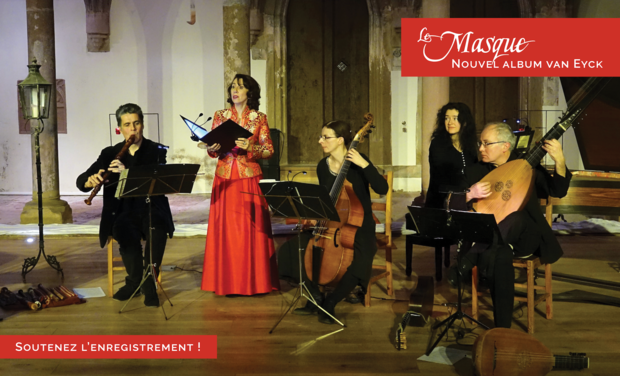 You might have already enjoyed it live: "Baroque Europe with van Eyck" has become one of Le Masque’s flagship programmes. In the past 10 years, our baroque music ensemble tours Europe with the same pleasure to give life to the melodies of the Dutch flutist. Indeed, this original programme is now part of Le Masque’s history and DNA.

Famous carillon player of the cathedral of Utrecht, Jacob van Eyck (1590-1657) left a prodigious work for recorder: Der Fluyten Lusthof. In his time, he collected more than 150 melodies borrowed to composers or heard in churches or taverns. Naïve or tender, burlesque or extravagant, these airs were already, at the time, hits all over Europe. Following a tradition coming from Renaissance, the virtuoso flutist created then freestyle and improvised variations.

A new and richer configuration

For more than 10 years, the musicians of Le Masque have experimented different versions to fix the most convincing and vivid ones, gathering and combining different sources of each melody. Firstly sang in the form in which van Eyck discovered them, the tunes eventually appear attired in a rich and original instrumental configuration : recorder, lute, theorbo or guitar, viola de gamba, positive organ and drums.

Beyond churches and concert halls, we have been lucky enough to bring this music to places that it usually doesn’t reach: a prison, an Alzheimer clinic, a "priority education" school. Every time, through this vivid and contrasted pieces, the musicians could share warm and radiant moments with the public.

Today, we want this repertoire to meet a broader audience through an original recording. On this occasion, the ensemble will be composed of one soprano and five instrumentalists. Airs borrowed to John Dowland, Spanish-style dances, Lutheran psalms… and a nightingale full of surprises will be featured. Jean-François Felter will conduct the recording at the end of August at the Eglise du Bouclier in Strasbourg. The release is planned at the beginning of December 2019.

In order to realize this ambitious project, we need your help. Beyond the technical implementation itself, a recording incurs extra costs: rent of the room, tuning of the positive organ, hosting of the musicians… Without mentioning fees for the artists! Finally, it shall be added to these expenses the cost of this crowdfunding platform and of the counterparts, necessary elements to thank you for your support.

What if we collect more? We will be able to produce more CDs, to pay the artists more and to communicate better around the project.