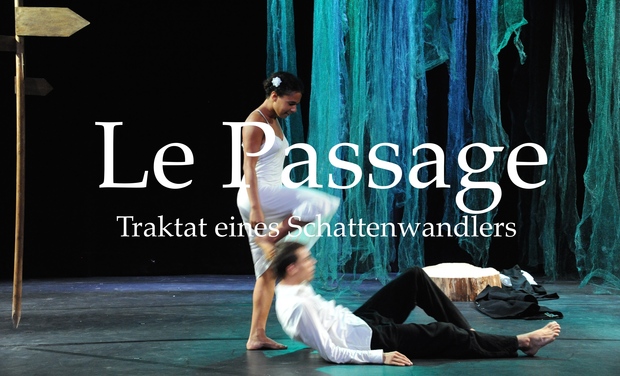 A man stands alone at a crossroad, not knowing which direction to take. Instead of a backpack he is carrying a Double of him : the weight of his past, his shadow, his « himself » whom he doesn't always recognize. Feeling tired, he falls asleep under a tree, and begins to dream. His other himself « makes him » dream and becomes the Woman, the Mother, the Other, to oblige the Man to face himself in all his different faces.

"Le Passage" is a transition moment. The dreamt travel of a lonely man, who learns how to know himself.

Little history of the project Everything starts when Dominik Jellen propose to Mbalou Arnould to participate to his diploma project, ending 3 years of education in the Academy of Physical Theatre Dimitri (Switzerland)

They create there a 20mn duet, presented in the Dimitri Theatre in july 2015. This duet has been evaluated with the grade "excellent" by a jury of swiss, italian and french professionals.

And they create there as well a strong will to continue those adventures together.

First of all the research of a language.

How can a german and a french speaker who speak to each other in english or in italian, create a theatre piece together?

Some questions such as « How to carry the weight of your past » are becoming physical questions on the stage, and it is through the various answer we are looking for a narration.

And then the performance in itself...

June - July 2015 : creation of the first short duet in the Dimitri Theatre

-5 weeks of residency in the MarkusSaal (Salzburg, Austria)

-Representations in Austria and Czech Republic (being organized)

Tour in France (being organized)

The company and the leaders of the project :

Mbalou Arnould : actress and violonist. She collaborate since 2012 with various international theatre companies such as the Divadlo Continuo (physical theatre, Czech Republic) and the Altamira Studio Teater (Denmark). She creates the Strings Theatre Company in 2014, together with the finish dancer and performer Nella Turkki.

Dominik Jellen : after various experiences in theatre and poetic writing in Salzburg, he applies for the Bachelor in Physical Theatre of the Dimitri Academy, which he graduates in 2015, after three years of intensive theatre, dance, acrobatics and improvisation training. He works as direction assistant of Peter Wittenberg in Linz. On stage he is also playing various percussions instruments.

The project is produced by the Strings Theatre Company. The base of the scenography has been financed with the fund of the Dimitri Academy for diploma projects.

We made various applications for funding, for example touring fundings, but we are missing the money needed for the last creation step to happen in the best conditions possibles.

Charges for 5 weeks of residency at the MarkusSaal (Salzburg) : 750e

Salary of a light technician during the last week of creation : 300e

Renting of a studio for the registration of the performance music : 150e

To make it round we launch a crowdfunding for 1800e.

If we go over this amount we will be simply able to do better, to do more, in term of communication, scenography, costumes...and to prepare the future of this project !

A personal thank-you email with some pictures of the show.

previous + a signed print of a picture of the performance.

Previous + 2 reducted price ticket of the representation at the Toihaus or elsewhere.

previous + 2 invitations to the show in the Toihaus or elsewhere and 2 reducted tickets.

previous + one invitation to diner after the performance or a "surprise basket" of products from the various countries where the show has been created.

Congratulation, you bought the performance ! If you don't have a theatre we will do our best to find one and perform in your city !