Help ALS patients take on an exceptional challenge to make noise about their illness and raise funds. 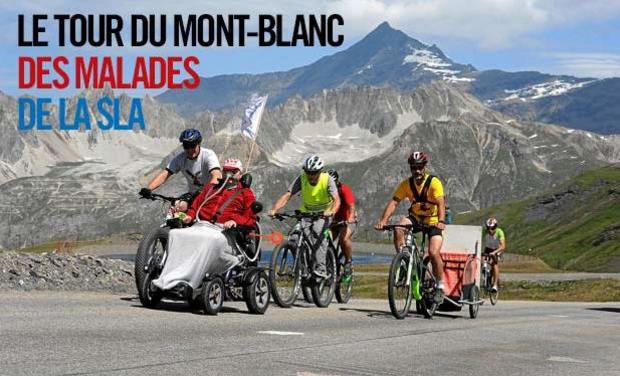 To talk about their disease and raise funds for research, patients with Charcot's disease (ALS) are embarking on the challenge of making a "joelette" trail around Mont-Blanc in the footsteps of the mythical UTMB® (Ultra-Trail du Mont-Blanc®).

Amyotrophic Lateral Sclerosis (ALS), more commonly known as Charcot's disease after the name of the researcher who studied it in depth over 130 years ago, is still an unknown disease. This neurodegenerative disease inevitably leads to the death of the patient ; the patient gradually lose the use of its members and vital functions ; the mind becomes little by little a prisoner of its own body.

Not only the causes of this disease are unknown, but we still speak very little of ALS despite it is the most common "rare diseases". ALS is the third most common neurological disease in France. The lack of information on the disease means that patients are left destitute and gradually isolated during the diagnosis stages and afterwards.

Many personalities have been touched by the disease.

So, to meet other patients, change their lives and talk about their disease, we organize one challenge each year since 2016.


In 2016, we reached the Ministry of Health from Savoy with an electric wheelchair: 800 km and 13 stages.

In 2017, we recreated the 18th stage of the 2017 Tour de France in electric wheelchairs and joelettes (a kind of sedan chair).

In 2018, we decided to do The Tour of Mont Blanc, straddling 3 countries, and we are counting on you to join us:


* A trail around Mont-Blanc, riding joëlettes (pulled, pushed or even lifted by runners) and electric wheelchair (for suitable motorized roads), in 10 days and 9 steps


* The route follows the UTMB® trail, a legendary race that will leave Chamonix on August 31st. The UTMB® supports us and is committed to relaying our actions to their runners, volunteers, journalists ...


* We will arrive at the moment of departure of the UTMB® to ensure the presence of a maximum of people and journalists: more than 50 000 supporters, 10 000 runners and 200 international journalists.


* Throughout the course, which spans 3 countries, we will organize conferences on the disease and fundraising for research.


* The project will be safe for patients and porters, who will be followed by paramedics.

It all started during our 2017 ALS challenge: Gilles Houbart, president of our charity, saw the joëlettes in action: they allow disabled people to access paths that were impassable by a classic wheelchair, thanks to the fraternity of the bearers, who give their physical strength to those who have none.

Fraternity is an important value for Gilles. A former career soldier (particularly at the heart of the 7th Alpine Chasseurs Battalion and the High-Mountain Military School), he believes that the many challenges related to disability and illness should not be seen as personal problems but should be settled by our society.

While he had no symptoms of the disease, Gilles created one of the first paragliding schools that allowed disabled people to do commercial flights in tandem paragliding.

He is now revolted by the status of the sick and disabled in our societies:

* The enforcement of accessibility of public buildings, voted by french MPs more than 20 years ago, has still not occured in the majority of cases. When one can not vote because his town hall has no access ramp, where is freedom?


So, Gilles puts fraternity into practice. He spreads it to his companions in misfortune, the patients met on the roads of these challenges, who feel less alone, after. He also finds it with his companions, the volunteers of the charity, and the members of his family, who carry him at arm's length (literally this year!). He finally finds it with you, who year after year, understand his approach and help to talk about this ALS disease and collect donations for research.


Thanks to you, more than 28,000 euros have been donated over the last two years!

Donations to the ICM, the Thierry Latran Foundation, the University Hospital of Grenoble

And then there is a symbolic dimension to the project, too. Gilles has spent part of his life in this massif. Mont-Blanc, like Charcot's disease, watches men go by, but he is still there. And there will always be men to take up the torch and fight to climb it.

It's a message with a political dimension, too. Because what politicians do to change things will remain with them for the ages to come.

The fundraising will be used to finance this adventure that will educate many people about the disease, especially the great sportsmen, over-represented in the patients of Charcot.

The expenses include the operating costs of the event itself, the costs of preparation, and communication.

This year, our total budget exceeds 20,000 euros. We have already approached sponsors who are more and more numerous to join us from year to year. They have already donated 8,000 euros to the project, and we count on freebies to cover 6,000 euros of expenditure.

We will also use the services of a communication officer, which is essential to ensure the success of our objectives.

If we exceed the amount to collect?

Exceeding 2,000 euros
Our information stand will be visible from far away thanks to more balloons. We will be able to print even more posters and information leaflets.

Exceeding 4,000 euros
We can then consider buying inexpensive advertising flyers in specialized magazines to raise awareness of the disease, or print more flyers to distribute to runners, volunteers and journalists present at the departure of the UTMB ®

And if we go beyond?
Whatever happens, we transfer the benefits of the operation to medical research on Charcot's disease. In previous years, for 1 euros collected on KissKissBankBank, we were able to donate 2 to 3 times more to research, or 28 000 € donated in 2016 and 2017.

For any donation without counterpart, by a French taxpayer: tax receipt entitling you to a tax reduction of 66% of the donation amount.

They say that from acorns grow oak trees. Your name appears on our website on the thanks page and you help us reaching our goal, one small step at a time.

284/5000 100m course in your name, or in the name of a loved one touched by ALS. Our torchbearers will think of you every inch along this way, and before and after too, because you have a big heart§ + your photo on the patchwork page of the site + the counterpart SMALL STEP