Our master degree in Web and Multimedia studies - needs your help to fund its French-Korean web documentary. 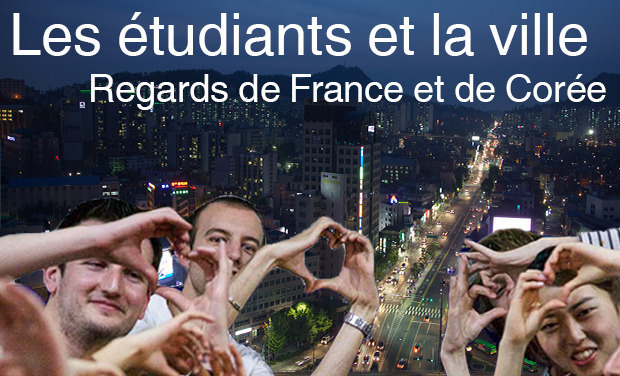 For the past two years, students of the Master Cultures & Métiers du Web have concluded their final year on a high note with a study trip to South Korea. About 80 students have already experienced first-hand the Korean culture. The country is one of the most ‘connected’ in the world, and in recent years it has become one of the most innovative in the high tech industry.

Here, you can already discover the trip of the previous students who came in Korea in May 2012.

Also, please see below a video we’ve put together at the term of our first year of master’s degree to present our training (french version).

In 2013, we wish to continue this wonderful adventure. So we set out to shoot a web documentary about ‘Students and the City’ in Paris area, by the end of April.

We’re eager to shoot part of the production in South Korea as this would give an added value to the project and offer an innovative and original angle. In order to carry out our work, we’ve already established close contacts with students who are enrolled in a similar training at Dong Eui University. Located in Busan (or ‘Pusan’ according to the way it’s pronounced in Korean) in the south-east of Korea, this city is the second largest one of the country with a population of about 3.7 million.

The 30th edition of the International Short Film Festival will be held in the city one week prior to our journey. This year the festival introduces a new category devoted to web documentaries. Although we won’t be attending nor participating in the festival, the organisers have promised they would feature our web documentary on their website. This could possibly lead to a partnership which will hopefully bear fruit when future classes follow in our footsteps.

During the 2012 edition, Korean and French students joined forces to make several documentaries on the use of social networks. They’ve then integrated them on a website called ‘Short Social Stories’ to create what is now known as a web documentary. The platform’s design is a nod to a well-known social network. Please click the link to view the work of Class of 2012: http://shortsocialstories.mastercmw.com/eomji-jok-la-tribu-des-pouces

Are you thrilled by this project? Whether you are a relative of a student of Class of 2013 or a curious user or a professional, we need your help to raise €7,000.

Should we succeed in raising this amount by the end of this 55-day fundraising campaign, it will enable us to pay for some of the plane tickets for the 25 students and 5 teachers. A Paris-Seoul ticket costs around €650.

As a sign of good will, each student has already paid out €500 out of his/her own pocket to maximise their chances to go.

You can pay by card safely as the process is secure. Should we fail to raise the amount needed to carry out the project, the fund will be reset and the money you’ve pledged to our project will automatically be paid out in full.

Are you a business or a professional?

We’re also looking for sponsors who can back our project.

Should you be interested in our project or have any question, feel free to drop us an email at objectifcoree@gmail.com or call us at +336 76 16 55 33. We’re available at all times.

"Mini Pack": Our heartfelt thanks.

"From the bottom of our hearts Pack": Previous compensations + special thanks on the webdoc website.

"Kodak Pack": Previous compensations + 1 souvenir photograph of your choice from a selection of the greatest shots taken by the students, delivered by mail. Standard format: 10 x 15cm (or 4 x 6").

"Super 8 Pack": Previous compensations + your copy of the DVD of the webdoc (and bonus images).

"Super Kodak Pack": Previous compensations + 1 photo print of your choice from a selection of the greatest shots taken by the students. XL format: 20 x 30cm (or 8 x 12").

"End Credits Pack": Previous compensations + Special thanks in the end credits of the webdoc.

"The Steven Spielberg Pack ": Previous compensations + you will be credited as a co-producer.

"Partner Pack": Previous compensations + For professionals: your logo will be featured on the webdoc’s website with a link to your own website + You will be credited as a partner in the end credits of the webdoc.

“Director Pack”: “Partner Pack” + For businesses/organisations: we offer you to shot a customised/tailored video on the “Students and the city” theme that promotes your core business / industry (the video will remain the property of the University).

“Website Pack”: “End Credits Pack” + Skills sponsorship: Students will design and create your portfolio (for individuals only) / a corporate website (for non-profit and businesses only) + hosting and domain name (.com, .fr) fees will be taken care of by the students.

“Sponsor Pack”: Are you a business? Do you believe in our project? Thanks to this significant financial contribution that has a very strong symbolic value to us, we will devote a page of our website to your company. We can offer you to shoot a corporate video on the “Students and the city” them that highlights your core business/industry. You will be able to use this customised video freely and indefinitely for all your communication needs (internal, external, on all media).