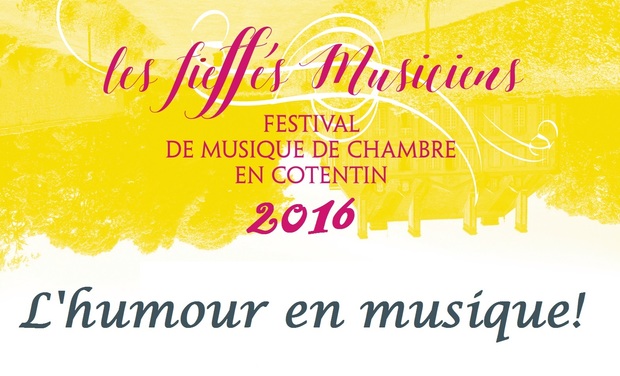 « Les fieffés Musiciens » is a chamber music festival which takes place in Cotentin (Basse-Normandie) in the third week of July.

But what is chamber music ? Chamber music is the art of playing together from duos to octets. So, it is a classical music festival ? Well, yes ! But Les fieffés Musiciens is a festival like no other…

The artists first ! Real chamber musicians ! Well, that’s normal for a "chamber music festival"… But that’s not always so easy ! At the fieffés we think that it is a long-running-work that allows a maximum of complicity. A chamber music ensemble shouldn’t be ashamed of its age ! That’s why we invite only ensembles which play together all year long and are destined to last.

Music is nice, but when I travel to Cotentin in the summer, it’s to enjoy the region… Well, no problem ! The second principle of the festival is to play in wonderful places : this year in the Manoir de la Fieffe, Château de Flamanville, Église de Portbail and Château des Ravalet ! Free entry !

To choose ensembles and places is good, but is there a guideline in this festival ? Of course ! Every summer, the festival has a new theme which runs all week through the different concerts !

This year’s theme will be the humor in music : Whether Satie, Hindemith, Poulenc or Mozart, all classical composers will be there to make you laugh ! A parody of a string quartet, the aria of Les Mamelles de Tirésias, secular Renaissance songs, the fieffés Musiciens will be there to show you that classical music can be fun!

But does this project really work ?? Well, yes! ...  the first edition was a real success, reported on by the local media, and there were more than 350 people in the audience, who are looking forward to the second edition !

Would you discover more about our programme? ... This way !

A wonderful mansion of the XVIth century, it has been taken over by Emmanuel de La Fonchais and Michel Niciejewski who have designed some beautiful lodgings and guest rooms.

But who will we be listen to?? The piano duo Y’voir, founded by Delphine Armand and Yun-Ho Chen, winner of the Munich ARD Competition 2015, will open the festival ! A type of black and white which take all the orchestra’s colours. That’s the principle of the two young women !

From the Manoir de la Fieffe, we’ll go… east !! The Duo Mercutio, violin-piano, winner of the international competition Léopold Bellan 2016, and the Duo Philine, voice-piano, born in the class of Anne Le Bozec at the CNSMD in Paris, take us to a festive and capricious Vienna!

From Wolf’s irony to Kreisler’s lightness, from Mozart’s jokes to Richard Strauss's decadent touch, without skiping the other Strauss, Johann and its operettas; the four musicians fly through time to offer you Viennese suprises of all kind ! In the Manoir de la Fieffe, you couldn’t dream of anything more exotic !

This time, we meet at the Château des Ravalet, a Renaissance castle of blue shale located in a huge park, and which is the Manoir de la Fieffe’s elder brother : both were built at the same time around 1560 by Jean II de Ravalet.

The string quartet Ernest, winner of the competition Tremplin Jeunes Quatuors of the Paris Philarmony, will play for us ! From Beethoven to Kurtág we happily discover many facets of the string quartet’s history up until the quartet’s parody of Hindemith Minimax or the modernity-gag Concerto for a typewriter...

The concert will take place during the exhibition of the painter Frédéric Faye : you’ll see colours and flowers outside... and inside !!

Meet Philine and Mercutio again in the delicate frame of the Orangerie de Flamanville !

French follies : we could describe the programme as such! Rameau, Debussy, Satie, Poulenc and more will be a delight to your ears and spirits!

The four musicians, supported by the Society Pierre Wissmer, will also play works of this french composer of the XXth century, unjustly unknown.

And don’t miss visiting the park of the XVIIth century castle which contains 1150 dahlia varieties!

And last but not least ! We invite you at the Church of  Portbail, an old roman church of the XIth century situated in the port, with a superb accoustic, to listen to the Trio Musica Humana, a vocal trio founded by three singers of the Maîtrise de Notre-Dame in Paris. They will sing songs of the Renaissance and of the XXIth century –no time limit for the “human music”!- And let’s enjoy the pleasure of being by the sea!

So, why ask for our help ? Because a festival costs a lot of money !! You have to pay the artists, to accomodate them, to rent the pianos, etc… In our case, the costs amount to 11000€ !

But you’re too late !! Calm down, the essential financial work has been done ! We need only 2000€ more, 1000€ of which are for the communication. And that’s where you can help us !

A festival is nothing without good publicity, which can attract the audience, and a strong visual identity ! The money you give will serve to the design (500€) and the poster printing (500€).

A huge thank you ! A reservation for the concerts of your choice (some of the concerts are limited to fifty people !)

Precedent counterparts + a funny and unique photo of the festival backstage...!

Precedent counterparts + an invitation to drink real Normandie’s cider with the festival’s team after a concert + a poster of the festival with the autographs of all artists of the week!

Precedent counterparts + a lunch with the festival’s team at the fieffés’ house at Barneville-Carteret !

Precedent counterparts + a « before-concert » : you can assist to the general rehearsal of one of the concerts + your name among the partners on the website !

Precedent counterparts + a private concert given by the artistic directors !