A program of cultural events shedding a new light on the story of world of prison and the art created by inmates. 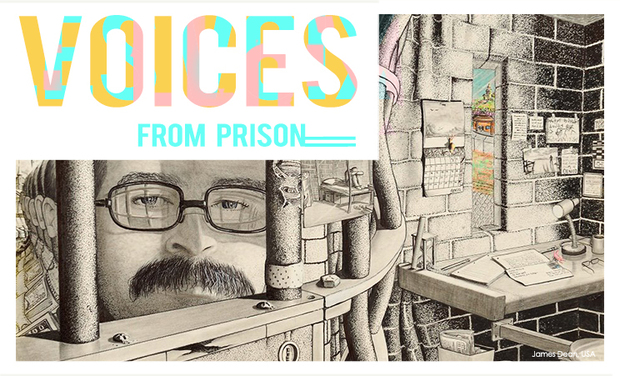 as  AMBASSADORS of the exhibition

and the cartoonist BERTHET ONE,

« Half a square meter of Freedom »

An international exhibition of art created in prison

revealing the multiple aspects of prison

in partnership with the Association “Art and Prison e.V.”, Germany,

and the french Association Carceropolis

From October 16th to December 14th 2014, Dorothy’s Gallery, American Center for the arts, will host, for the first time in Paris, « Half a Square Meter of Freedom ».

This exceptional art collection brings together 150 works of art created in prisons from more than 40 countries, highlighted by an original program of artistic and cultural events:

Thanks to your contributions…

Thanks to its generous contributors on KissKissBankBank, the first objective has been reached ! The association « Art et Prison France » can now provide the transportation from Berlin to Paris of 150 works of art, painting, drawing and sculpture, created by incarcerated men, women and adolescents.

During this exhibition, a calendar of cultural events is programmed each week. It is designed to make the rarely penetrated world of prison life visible for all.

It demonstrates that art transcends social, cultural and geographical barriers, that prisoners are creative and capable men and women.

The public is invited to make its voice heard, to take an active part in the debates regarding the role of prison in our societies, the conditions of incarceration and the fate of prisoners.

Help us make this meaningful program come true by ensuring a broad communication campaign and successful publishing the exhibition’s catalogue.

The program will cast a new light on art in prison, based on the exhibited artworks as well as on literary, musical and theatrical creations.

Differences and similarities in prison systems across the world will be looked at and compared.

International experts, researchers, teachers, former prisoners, famous artists, writers, charitable institutions, prison authorities, will be in Paris to participate in this program and to dialogue with the public.

They will share their experience of the multiple realities of life in prison, of its organization and inner workings.

A multi-faceted cultural program is organized all along the exhibition at The American Center for the Arts.

The program gives a platform and visibility to prisoners and to those who have committed their lives to helping the prison system evolve:

- Roundtables with international experts : Peter Echtemeyer, founder of "Art and Prison" in Germany   Tim Robertson, President of  "The Koestler Trust",  in London Dave Gussak, professor at the Florida State University, known for his research on the benefit of art therapy in prison

- Evenings with artists, former inmates, who have built new lives and return to prison to teach art and to give help and support : Berthet One, cartoonist, Karim Mokhtari, author of the book « Rédemption »

- A meeting with Reza, reporter-photographer, one of the most accomplished and dedicated contemporary photographers of our times. Arrested at 22, imprisoned, tortured because of his artistic activism against the Iranian regime, he continues to combine humanitarian actions and artistic creation, teaching photography in prison and helping youth and fragile populations all over the world.

- Testimonies from doctors, architects, photographers, auditors and associations Carceropolis, Le Vent se lève… They will tell you vivid and moving stories from their experiences inside prisons, and of the struggle, loneliness, courage and hopes of the prisoners they have met through that journey.

- Screenings of documentaries and short films, often written and directed inside prisons by prisoners.

- Readings, poetry, letters by prisoners, and extracts from the timeless works of Apollinaire, Victor Hugo, Cocteau, Joyce, interpreted by actors and from the  Conservatoire National d’Art Dramatique.

- An eclectic series of concerts (classical, traditional, Rap) often written or/and performed in prisons, by inmates, contemporary musicians, and with the participation of the "Conservatoire à Rayonnement Régional de Paris"

- Creative workshops based on an artwork from the exhibition developed with Le Vent se lève.

Events that have taken place at dorothy’s gallery, American Center for the Arts

Concert of Melissa James  in support of the

This collection is unique by its size, its artistic quality and geographical diversity. It brings together 150 works of art, paintings, drawings, sculptures from two international art contests in which more than 1000 women, men and juveniles in prisons participated. The collection comes from Germany. It was gathered by the not for profit organization " Art and Prison e.V » and was exhibited in the Ministry of Justice in Berlin in 2013.

A bridge of understanding

To help prisoners regain their dignity and identity, their art must be seen.

This recognition helps them to believe they can successfully reintegrate society.

Art created in prison is rarely shown outside and few speak about the exceptional creativity which is awakened behind bars.

This project is also supported by the Koestler Trust, in the United Kingdom, and the association Carceropolis.

The project is supported by The Koestler Trust, Royaume-Uni

and the cartoonist BERTHET ONE

Founded in Berlin in 2009 by Peter Echtermeyer, at the origin of the international art contest open to inmates serving time in prisons throughout the world.

Peter Echtermeyer a humanist and exceptional man, has been active with prisoners for more than 20 years, providing understanding and support to inmates and giving them hope for the future though the showing of their art.

Cornelia Harmel, artist of east-german origin, is the curator of the exhibition « Half a Square Meter of Freedom ».

Founded by Inga Lavolé-Khavkina, Bruno Lavolé and François Charron to promote the arrival in Paris of the international exhibition of art created in prisons.

- Bruno Lavolé is a former senior bank executive, and a producer of documentary movies.

- François Charron is a former senior bank executive. He is the curator of the « Talents Cachés » exhibition, showing art from the Paris area prisons.

American Art Gallery, cultural center founded in 2006, dedicated to the democratization of art, bringing cultures together and enlarging art networks.

To finance the program of cultural events and its promotion towards a large public, the minimum budget is 5000 €.

Funding through the KissKissBankBank fund raising : 2 500 € Funding from institutional and private partners: 2 500 €

How the funds will be spent:

Invitation costs for the international specialists / Domestic and cross-border transportation costs / Copyrights for the video and written works / Artist compensations for their performances (musicians, comedians) / …

Creation and distribution of communication supports : 1 000 posters and 4 000 flyers for the exhibition / Printing the program / Press and Media Communication / …

Design and publication a 500 copies of a catalogue, A4 format.

The artwork on exhibit is not for sale… We therefore need your support for the two months of this event.  Help us by participating in this project and contributing today.

Your name printed on the exhibition guide + our warm thank you

one poster of the exhibition + our warm thanks [+ the above compensation]

Become a member of the American Center for the Arts, have priority and preferential conditions for events: openings, receptions, concerts, film + Receive one high quality digital print A3 (30x40cm) of one of the exhibited artworks [+ the above counterparties]

The gallery will be at your disposal for a half-day for a private or professional event of your choice (promotion of a product, birthday celebration, marriage, etc.) + You will be registered as an official sponsor of the exhibition, your name, logo, on our site, our official poster, flyers, newsletter, etc. during the exhibition + [+ all above counterparties]

The gallery will be at your disposal for a day / evening for a private or public event of your choice (promotion of a product, birthday celebration, marriage, etc.) + You will be registered as an official sponsor of the exhibition, your name, logo, on our site, our official poster, flyers, newsletter, etc. during the exhibition + [+ all above counterparties]