In simple terms "Luxembourgish in your pocket" explains the spelling rules that you need to pay attention to when writing in Luxembourgish. 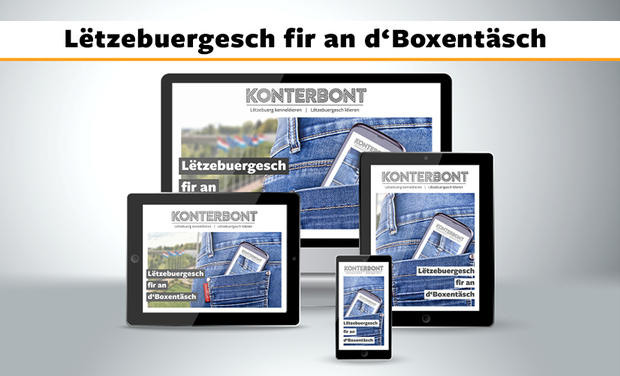 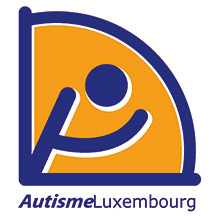 Autisme Luxembourg a.s.b.l. will release an electronic publication in Luxembourgish by the end of 2017. The topic will be: „Lëtzebuerg an all senge Facetten” (Luxembourg in all its aspects) and its purpose is to create jobs for people with Autism Spectrum Disorder. The publication is called „Konterbont“.

With the support of LOD (Lëtzebuerger Online Dictionnaire), we intend to help people get acquainted with the Luxembourgish spelling rules.

In simple and accessible terms „Lëtzebuergesch fir an d‘Boxentäsch“ (Luxembourgish in your pocket) explains the different spelling rules that you need to pay attention to when writing in Luxembourgish. Later, you may want to test your abilities with the exercises provided on our website!

We need you to make it happen!

Why using an app for learning the Luxembourgish orthography?

The "Lëtzebuergesch fir an Boxentäsch" app helps us draw attention to the new electronic newspaper "Konterbont", which will be released by the end of the year. The Luxembourg language has an increasing importance in the life of a lot of people, not only the Luxembourgers, but also cross-border commuters and foreigners. The language of Luxembourg is increasingly used in day to day communications, in social medias and in the professional working environment, but also in everyday life. Very often, those for whom Luxembourgish is a foreign language lack the opportunities to apply what they learned or lack the confidence to practice the language. An electronic newspaper in Luxembourg is to give them the opportunity to rehearse and consolidate what they have learned.

We need you to make it happen!

The "Lëtzebuergesch fir an Boxentäsch" app, and foremost the electronic newspaper "Konterbont", will help us create further workplaces for people diagnosed with an autism spectrum condition. Their job will be to create tools that enable foreigners and cross-border commuters improve their language knowledge and, thus, help them find a position within the job market and, eventually, find their own place in Luxembourg society.

A highly customized application is provided for different platforms (tablet computers and smartphones), which corresponds to the application selection of the electronic carrier. The transition to digitalisation and the integration of the Internet into everyday life of most families and the professional world has significantly developed in recent years. The Internet has become a place for expression, information, sharing, encounter and discoveries of the world, but it has also become a multimodal medium for learning foreign languages ​​(e-learning).

Autism and its challenges.

An increasing number of young people with autism spectrum and related development disorders, as in Asperger autism, have experienced a rather long time in traditional school settings. However, this schooling is disturbed, for some of them, by significant impairments in their social and communication skills, especially their ability to take up contacts, a skill inherent to every community life.

People with Asperger syndrome are characterized by a specific brain development. The syndrome was discovered in 1944 by the Austrian psychiatrist Hans Asperger and was recognized by the World Health Organization in 1994. Asperger's syndrome is a light form of autism, which does not imply an impairment of intelligence. The syndrome manifests itself mainly through difficulties in translating the social language, and in understanding and interacting with others. As people with Asperger syndrome are often isolated and fear unpredictability, they need a structured and calm work environment.

In fact, those young people experience multiple social-adaptive and emotional difficulties, which are their main hurdles to succeed at school and, later, integrate in a professional context. However, they have a significant level of theoretical knowledge and a real cognitive potential for new intellectual activity areas, the digital press sector being one of them. Despite their high level of intelligence and performance, these young adults need the schools or the professional environment to provide individual support and conditions adapted to their difficulties. Their professional skills can be fully developed only in a specialized setting, such as in sheltered workshops or with individualized job coaching in a company operating within the first market.

In this context, Autisme Luxembourg a.s.b.l. is to offer a new socio-professional direction that is best fitted to the current and future demand of the readers, and to the current worldwide offer within printed and digital press. In order to contribute to the enlargement of the adaptability and employability of these young adults, Autisme Luxembourg a.s.b.l. will start a new project in the area of information and communication technologies, and in the area of ​​journalism, an activity that is in a state of upheaval. Young adults are therefore offered vocational training and professional integration within a workshop for the publication of an electronic journal, developed in order to ease learning the Luxembourgish language.

Autisme Luxembourg a.s.b.l. would like to meet the demand for work integration in the field of computer science, a niche that a particularly adapted to the specificities of young adults with Asperger autism. Thus, they will be able to express their real competences, realize their full potential, and pursue their professional and personal development, despite their handicap-related limitations.

Autism Spectrum Disorder is a complex developmental disorder, which is characterized by impairments in 3 different fields:

The people concerned may exhibit strengths such as exceedingly detailed knowledge in specific areas and yet these ‘splinter’ or ‘savant’ talents rarely contribute to their ability to cope with everyday life.

What causes autism remains unknown to this day. According to the latest research, the triggers are mostly genetic and environmental. Theories that ascribe the causes of autism to psychosomatic and educational factors are no longer considered relevant today. Recent studies point to various fields in the search for possible causes (genetic, environmental, metabolic, neurological, etc.).

Autism cannot be cured nor can its cause be treated. However, thanks to targeted therapies the impairments in social interaction can be reduced and communication significantly bettered. Support in various areas of life can improve the quality of life of the autists and that of their families.

This project will create 6 to 8 workplaces for people with deep development disabilities. The related workshop is committed to strengthening the socio-professional competences of young adults with Asperger's autism, which will allow them, ideally, to integrate the workforce within the first job market.

Thank you for your support. Every donation helps us to concretize this beautiful project. As an non-profit organization, our organization sends you a certificate which allows to deduct your donation from the tax you pay in Luxembourg.

KissBankers Package 1: "Lëtzebuergesch fir an d'Boxentäsch" for your tablet computer and your smartphone + your name in the brochure + 1 certificate which allows to deduct your donation from the tax you pay in Luxembourg.

KissBankers Package 1B (for companies): "Lëtzebuergesch fir an d'Boxentäsch" for your tablet computer and your smartphone + partner for 6 months (your advertising on our web and Facebook page)

KissBankers Package 2B (for companies): "Lëtzebuergesch fir an d'Boxentäsch" for your tablet computer and your smartphone + partner for 12 months (your advertising on our web and Facebook page) + graphic realization of your advertising by our graphic team.