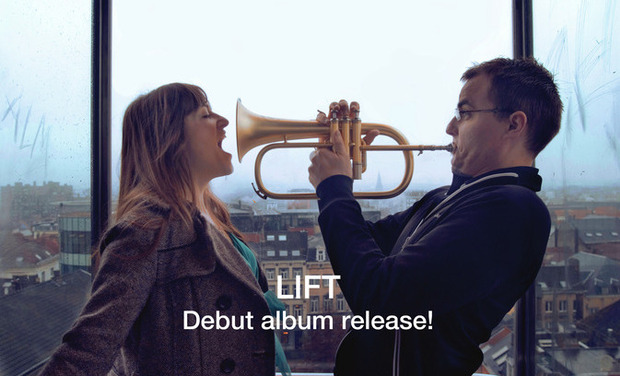 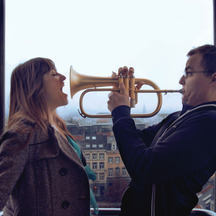 As many of you already know, we recorded our debut album -1st Floor- at Studio de Meudon in July 2012 with the help of sound engineer -aka The Magician- Cyril Coutand. We are also very lucky to feature three amazing musicians on the album : David Linx, Christophe Panzani and Sandrine Marchetti. This winter, the recording was sent to the very talented Nelson Carvalho (Lisbon) to be mixed, and around April, Raphael Jonin, one of the very few gifted master-engineers in France, worked on the mastering of the album, marking the end of the artistic production.

For this debut album, one of our priorities was to record our compositions in the best possible way in order to give a project which is close to our heart its best chance. You'll no doubt  understand that such a decision implies a considerable investment. Until now, the entire project has been self-financed apart from a smallgrant from Wallonie-Bruxelles.

The last step to be financed is the actual production of the album (pressing, design) as well as the promotion (press attaché). That's why we need your help. Your support will mean that this project will finally be completed!

Releasing the album will take us to the next level where we can start winning over  programmers, the public, and the media - all the essential contacts for success in music!

We are very proud of the result and look forward to sharing our work with all of you. Our goal is to release the album in autumn 2013 and we hope to celebrate it with you very soon!

For more on LIFT, check out our website http://liftmusic.me

A few pictures of our recording at Studio de Meudon :

The one and only, David Linx !

We will use the funds for :

-the production of the album (pressing, design) in 1000 copies.

Free donation with our warmest thanks :-)

Digital download of 3 album tracks (of your choice, one with guest)

«1st Floor» Pack : previous reward + 1 invitation to the launch concert in Brussels or Paris in autumn 2013 (or any other concert if you can't make it to the launch)

Advance delivery of 3 signed albums : treat your friends and family by giving them LIFT's debut album !

«Elevation»Pack : the advance signed album + 1 invitation to the launch concert in Brussels or Paris in autumn 2013 (or any other concert if you can't make it to the launch) + a personal singing, trumpet or arranging lesson with Emily or Thomas

«Take-off»Pack : 2 advance signed albums + 2 invitations to the launch concert in Brussels or Paris in autumn 2013 (or any other concert if you can't make it to the launch) + you get to choose a title for a future LIFT composition

«7th heaven» Pack : 1 advance signed album of LIFT + 1 invitation to the launch concert in Brussels or Paris in autumn 2013 (or any other concert if you can't make it to the launch), + a personal arrangement or composition for a combo of your choice (from solo to big band) by Emily or Thomas. Expect additional charge for symphony orchestra ;-)