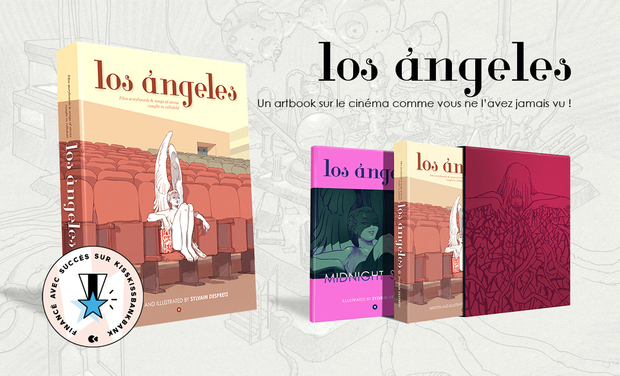 This effort is funding the long-awaited artbook by one of Hollywood's most ubiquitous artists and character designers. This promises to be a new reference in the medium of design art and commentary on movies.

What do Ridley's Scott Gladiator, Luc Besson's Fifth Element, Stanley Kubrick's Eyes Wide Shut and Madonna's music video Like a Prayer have in common? ... Stumped? You might be, unless you happen to be a hardcore movie buff who watches DVD extras features!

Well, the answer is... Sylvain DESPRETZ!

Sylvain is an artist who has dedicated his life and talents to making the dreams of Hollywood's most sought-after directors come to life with his drawings. His storyboards, concept art, and commentaries have appeared in the books and DVD features of the movies Gladiator, The Fifth Element, and Black Hawk Down as well as the documentary The Death of Superman Lives: what happened?

Born in France, he came to the USA when he was 16 on a school exchange program, to partake in the American dream. He took his first professional steps as an art director in New York, where he worked on TV spots for clients like Pepsi, Gillette and American Airlines. When he moved to Hollywood, he created storyboards for director David Fincher and worked alongside pop star Michael Jackson on video concepts for his Dangerous album. Throughout the 1990s Sylvain also worked for director Ridley Scott and contributed to the development of numerous feature film projects and TV spots.

For two decades his name has been associated with several successful, high-profile films, notably Black Hawk Down, The Planet of the Apes, Harry Potter, Valerian,The Fountain or Alien Resurrection.

As if it weren't enough, his mentor in the early part of his career was none other than the late Jean “Mœbius” Giraud, the world-renowned graphic novel artist.

Sylvain has assembled a book of his artwork and storyboards for Hollywood movies from his long career in film.

For more than 20 years, he has lived and worked behind the scenes and next to the industry's biggest and most respectable names. A renowned artist who works in the shadows, he has helped pen the visions of Ridley Scott, David Fincher, Andrei Konchalovsky, Mike Newell and Tim Burton to name but a few. Storyboards, concept art, paintings and illustration – his palette of talents has been deployed to bring emblematic, and sometimes, beautiful yet lesser known works to fruition.

This stunning volume is neither catalogue nor instruction manual – but can possess a bit of both, at times– and yet is so much more: throughout the pages, the author reveals his calling – that of an artist and craftsman putting his talent to work on the dream machine that is Hollywood.

Peppered with anecdotes, observations and musings on the past two decades, this awe-inspiring book is a must-have for all those who are interested in cinema, illustration and art in general. In these pages, you will find never before seen artwork that contributed to the look of beloved films, and a few legendary unmade projects by great directors. You will also find a trove of film knowledge and information about visual storytelling techniques.

Creating this book wasn't easy: it required time and effort to gather its content; some of which was buried deep in the archives of film studios. The layout was designed under Sylvain (very) close supervision by art director Nathalie Ponsard-Gutknecht, and today, we are fully ready to go to print. You can check a pdf with the first chapters on Caurette's website. We even have TWO versions ready, one in English, and one in French, identical in every way but for their respective language.  (If you are interested in the French version, please visit THIS PAGE for more info.) The only thing we need is YOU.

Embark on this journey with us, cross the Alps with Hannibal, fight alongside roman gladiators, jettison into space (where no one can hear you scream) -- won't you?

If you're among the first 100 supporters of this project, you can pledge for the "Early Bird" special and will received 3 exclusive prints along with Los ángeles, including one which will be hand signed by Sylvain Despretz.

Don't hesitate to check the Caurette's website to read the first chapters.

The Deluxe Edition contains two books inserted in a beautiful slipcase : Los ángeles and Midnight Show. Midnight Show is a 80 pages, softcover volume, filled with illustrations that, despite our best efforts, we were unable to fit into the main book. These drawings are for the most part related to movie projects but feature also some personal artwork by Sylvain. Both books are 8,5 x 11 inches (A4) in size.

Make your copy unique! Get a sketch from Sylvain inside your copy, either in black & white or color.

Please note that the books with sketches might be shipped a bit later than the ones without, that is to say, in December instead of November.

Of course, along the way, there will be extras, bonuses, and surprises (in a word, stretch goals!) for all of you who join us in the adventure. First, every participant will get 4 postcards that are exclusive to this release, and all participants supporting a Deluxe or sketch edition will also get 3 exclusive prints (including one signed by Sylvain).

We decided to keep the stretch goals "secret" until they are reached. A bit of fun and surprise in an otherwise very square project! The first goal starts at €16 000 (200%) and there will be an additional one every time we reach another €8 000.

Every time you pledge for a book, whatever the tier, you will receive all the stretch goals that will have been unlocked. So, with a little luck, you'll end up with a parcel full of extras!

Note: as we are running at the same time a crowdfunding campaign in French, our stretch goals combine orders cumulated from both English and French versions of the book during our campaign, so we tally both in real time order to dertermine each level has been attained, which might be different from the total pledge amount visible on this page.

So, what are those unlocked strech goals now?

Our first (and second BTW!) stretch goal has been reached very quickly, only a few hours after launch. Ans soooo we're adding Soft Touch varnish to the cover of Los angeles :D. This is going to be a very nice object!!

And here comes (already!) the second one : we're happy to announce that with the book will ship an A2 folded and SIGNED poster (approx. 16,5 x 23 inches or 40 x 60 cm) from Barca crossing the Alps, a never-made Hannibal movie. Read more about the story behing the art in the NEWS section (News #02) and, of course, in the book!

So, what will happen with this one ? A  BOOKMARK. Well, not a piece-of-paper-bookmark that you put in the book (and loose ^^), but a thin piece of cloth that is bound in the book itself.

Number 4 ! And this will be.... Drumroll... A PRINT! Carefully choosen by Sylvain and printed on quality paper, and about the same size as the book. You're going to love that one :)

Here come TWO BOOKMARKS! Hey, we all sure have a use for those!

See you on Monday to discover this new stretch goal !

If a credit card isn't your thing and you still wish to back the project, please reach out to us on losangeles@caurette.com and we'll be happy to provide you with alternate methods of payment (and you will be eligible for all stretch goals of the campaign as well!).

Caurette has been running and shipping books for crowdfunding projects for several years now. The company has been part of #hardcover 1 & 2, Even Amundsen TEGN& Decade books, Andrew Mar's Aphos, Iris Compiet's Faeriesand many more, shipping thousands of books internationally.

Your books will be carefully packed and well protected: we have designed special packaging to ensure maximum protection. We HATE to receive damaged books, and we assume you feel the same!

Now... you can pick your favorite tier! There's no wrong choice, only options :) And if you'd like  find it in your heart to help spread the word, we will be forever grateful if you can share the project on your social networks.

The Kiss Kiss Bank Bank campaign will be used to finance the printing of the various books, illustrations and goodies of the campaign. It will cover shipping costs and the work done on book publishing.

Our favorite: the Los ángeles book, the additionnal 80 pages softcover book Midnight Show featuring (many) more illustrations by Sylvain Despretz and a Deluxe Slipcase to hold both. A collector for sure! In this pack : Los ángeles - The book Midnight show - The book Deluxe Slipcase 4 x Postcards "From Hollywood" 3 x Exclusive Prints (One signed) All unlocked stretch goals Shipping : € 15 Europe / € 35 World

Would you like to be part of the Los ángeles project? Here's a great way to show your support: a pack of 4 postcards featuring illustration from Sylvain Despretz. Free shipping included ! In this pack : 4 x Postcards "From Hollywood" Free shipping

One copy of Los angeles, 400 pages of artwork and stories from an hollywood insider. Thirty years of experience packed in a beautiful large format hardcover book. In this pack : Los ángeles - The book 4 x Postcards "From Hollywood" All unlocked stretch goals Shipping : € 10 Europe / € 15 World

THE BOOK + the Postcards + three A4 prints including a signed one. These will be exclusively available during this campaign. In this pack : Los ángeles - The book 4 x Postcards "From Hollywood" 3 x Exclusive Prints (One signed) All unlocked stretch goals Shipping : € 10 Europe / € 15 World

This premium tier includes the Los ángeles book, the additionnal Midnight Show book, a Deluxe Slipcase to hold both and a black & white sketch. A collector for sure! In this pack : Los ángeles - The book Sketch - Black & White Midnight show - The book Slipcase 4 x Postcards "From Hollywood" 3 x Exclusive Prints (One signed) All unlocked stretchgoals Shipping : € 15 Europe / € 35 World

Get a color sketch by Sylvain in your book. A unique piece of original work on your bookshelves! In this pack : Los ángeles - The book 4 x Postcards "From Hollywood" 3 x Exclusive Prints (One signed) Sketch - Color Shipping : € 15 Europe / € 35 World

Get a portfolio review from Sylvain. One hour during which you will be discussing your work (or his!). All portfolio reviews will take place after the fundraiser has ended, likely through Skype for geographical reasons, at a mutually agreed-upon time; they must either be in English or French language. Only one person's work can be reviewed during session. A great opportunity to get advices and tips about working as an artist in the film industry. In this pack : Portfolio Review - One hour Los ángeles - The book Sketch - Color Midnight show - The book Slipcase 4 x Postcards "From Hollywood" 3 x Exclusive Prints (One signed) All unlocked stretchgoals Shipping : € 15 Europe / € 35 World