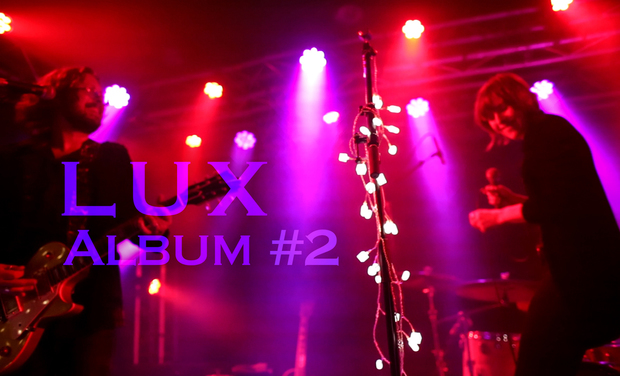 21 July 2020 UPDATE. INCREDIBLE ! Not only have we reached the second goal of 10,000€ but you have launched us even farther. THANK YOU again for all of your support and your contributions. We are proud to have you on the team. This crowdfunding has allowed us to leave for the studio light of heart, serene. Today, back here in Paris and with the songs recorded, we can tell you that the rough mix already sounds amazing!

WOW! And WOW again ! As of today we are at 126% of our goal and this is all thanks to YOU! THANK YOU! But the campaign continues. We have 5 days before we leave for the studio to get this project moving ever onwards together - can we hit a second goal of 10,000€? We can try!

Hello! Again!  LUX here and for those who don't yet know us, welcome! LUX is the indie Rock band formed by French guitarist Sylvain Laforge and American singer/songwriter Angela Randall. From New York to Paris, the "transatlantic" aspect of LUX can be found in our "Velvet Rock" - a new take on the subject  influenced by Folk, Blues and UK and US Rock music.
We're getting ready to go back into the studio in July to record our second album!

But before we begin, here are some links to take you to some of our music to have a listen:

You already helped us to produce our first full album "Super 8" (released in October 2017, re-released in June 2019). Thank you again our deLUXe kisskissbankers for making so many things possible!

This debut album brought visibility to our music: "Super 8" had international distribution as well as press and radio play. Because of "Super 8", we were able to play in bigger venues in Paris, play acoustic tours in New York, develop the live performances with the band (full band - electric) and help enlarge our circle of audiences and followers.

We released videos to carry the two singles as well as some live concerts - all in collaboration with the American photographer Jehsong Baak. Other artists have played a role in the LUX project: Corentin Doucet, Robin Cracknell, Mike Derez, Will Le Caron.

There are kisskissbankers who gave us a helping hand by providing spaces or equipment or even their children and dog (video for "Super 8") in addition to their involvement in the campaign. You have been very generous before, during and after "Super 8" and it is to you and to new fans that we bring this project of a second album.

The starting point of LUX and the heart of the project is the composition and writing of the songs. It is this meeting of music and words that has always defined the project and its sequel.
Sylvain earned recognition as a guitarist accompanying artists such as the Rita Mitsouko and Catherine Ringer. He is the composer and craftsman of LUX songs.
Angela is the voice and the words of LUX. A native English-speaking lyricist, she has collaborated in France most notably with the very talented artist Gaëlle Buswel on Gaëlle's two previous albums as well as the forthcoming one.
On stage and in the studio LUX is accompanied by the excellent bassist Julien Boisseau who also plays with the Blues/Rock band Jesus Volt. Playing drums with the band since 2019 is Amaury Blanchard, a well known drummer who has played and toured with numerous famous French artists.

The album will be recorded at Studio Black Box in France in July. The band will record with Peter Deimel who they first met during the recording of the first EP and who was the producer for "Super 8". Peter works with big bands and small bands and bands from all over as well as renowned international artists and his work places him at the heart of what's being done in music today.
To see more of Black Box and the making of our previous album "Super 8" here is our video "Making of Super 8":

The primary objective of this fundraising campaign is to help with the significant costs associated with recording and producing an album. An essential element in understanding the sound of LUX and the reason for the high cost of recording is the fact that we record analog. Such an investment may sound crazy to some people but the end result is unrivaled and above all it is precisely this analog sound that defines our music.

The album will be done in two stages; July for the recording and August for the mix and the Mastering will follow. Our goal is to create a second album that shows our ability to go the distance, stay relative and most of all to create and bring our best songs for you, to make good music that will endure. A second album is always an important test for a band. A second album should reveal both continuity and evolution. It will be judged by the quality of the songs and their orchestration and the direction taken since the debut album.

We are confident in our songs and very much looking forward to sharing this project with you. Your support is indispensable to us from all points of view.

In the rewards for LUX album 2, you will find all the classics (digital album, vinyl, cd etc) as well as offers that will give us a chance to meet you in real life. On offer you will find private concerts, invitations to future concerts and "masterclasses" with each band member and the chance to spend time together offstage and on. There will be notably more "music" proposals to share the experience of listening and making music. We hope that in going through the rewards on offer, you will find something that appeals to you. If you don't find what you want in the proposed packs, contact us directly so that we can offer something tailor made with the "We Can Work It Out" pack.

All and any contributions are welcome and greatly appreciated whether large or small. Every level of participation, every time you help to spread the word plays its part in the progress of the project. Helping us to communicate on all networks - personal or social - is of great help.

The current situation has changed things for many and for us as well. That is why we waited and thought long and hard before organizing this campaign. But as we reflected on the fragility of life, as we saw just how deeply connected we all are, we realized that there is perhaps no better time than the present to move forward on projects both big and small. As artists this is what we need to do. We feel that music is meant to be shared and the experience of making it can be shared as well. Together we are unstoppable.
Thank you for taking the time to listen to us. We are dreamers, come and dream with us!

A few figures to understand what the funds collected will be used for:
Recording + mixing of the album (studio rental with sound engineer): 11,500€.
Mastering of the album: 1200€
CD pressing: roughly 2000€ depending on quantity pressed
Vinyl pressing and graphics: 1500 for 100 copies
KKBB commission 8%: 600€ out of 7500€.
In truth, the amount of money needed to make an album goes far beyond the cost of recording it. There are many other costs for a self-production project: mastering, graphics, pressing, videos, press agent, promotion, general expenses.
The purpose of this campaign is to help us cover the costs of the album and if we exceed our goal we will go even further with LUX!

Welcome to LUX! - Digital download of the Album + Thank You!

The CD of the new album + Thank You!

The CD of the new album signed and dedicated + your name and our thanks on the website (www.lux-theband.com)

All of LUX in its digital form: downloads of - the new album + the first album "Super 8" (deluxe édition 2019 and the first EP (2014) + the liner notes for the new album in PDF + your name and our thanks on our website + a LUX postcard with a signed personalised handwritten message + badge (so that you have a couple of "real" objects as souvenirs)

The CD of the new album, signed and dedicated + digital download of the first album "Super 8" (deluxe reissue 2019) and the first EP (2014) + liner notes for the new album in PDF form + A LUX postcard with a signed personalised handwritten message + your name and our thanks on the website + badge

Vinyl Lovers for a New Age

Vinyl of the new album! limited edition, signed and numbered (lacquer disc mastering) + download of the new album + your name in the liner notes of the album + LUX postcard with a signed personalised handwritten message + LUX bag

We Can Work It Out

Having trouble finding the pack of your choice? No problem, contact us so we can work it out.

Pack Vinyl Lovers + CD of the new album + have a drink with LUX! (meeting point to be determined) - the drink's on us!

The Drummer - Masterclass with Amaury Blanchard

Your Song with LUX

Your Song with LUX = if you have a song that you would love to have covered by LUX we are at the ready. Home recorded and orchestrated by LUX, from our home to yours + LUX Discovery pack

Can't stand the suspense? Impatient by nature? In that case, come by for a drink and a listen to the new album before anybody else soon after its recording + LUX Discovery pack

Concert Just for You

Get the look with a photo shoot in Paris (or elsewhere but travel expenses are for you) with the incredible photographer Jehsong Baak - an American artist in Paris and author of many photos of LUX. (www.jehsongbaak.com) + LUX Discovery pack

The LUX "Art and Music" pack = the entire discography of LUX (CD of the EP, CD "Super 8", Vinyl of "Super 8" as well as the new album in CD and Vinyl) +bag + Visit to an art exhibition in Paris (or nearby) with us, followed by a drink to chat about music and art + a 15 x 18 cm, limited edition print by photographer Jehsong Baak + your name in the liner notes

The ultimate reveal. An invitation to spend a day (and night) at Black Box with LUX + LUX Discovery pack and/or Vinyl Lovers + 2 invitations to the album release concert