Show us your magical powers by supporting us on kisskissbankbank to develop a new form of magic, social and without borders! 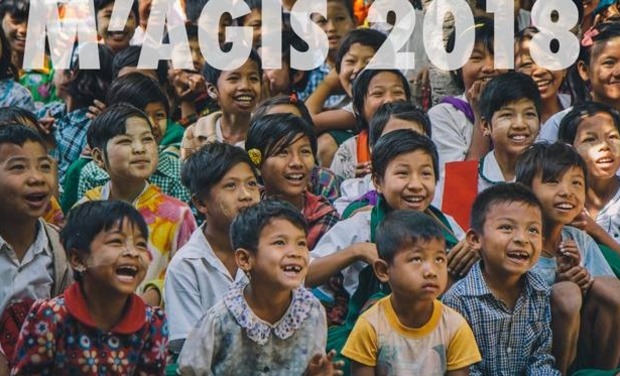 M’AGIS!  A strange word which, in French, is both an allusion to the world of magic (“magie”) and an invitation to act (“agir”). It is the chosen name of our association of magicians who support a new kind of magic: “social magic”.  In partnership with associations and NGOs implanted in different countries, we regularly offer both magic shows and educational workshops to bringing a touch of magic to those most in need both in France and all over the world (street children, refugees, isolated minors, the physically and mentally handicapped, people in precarious economic, social or psychological situations…)

2018 is a special year for M’AGIS.  In the six years since its creation, we have performed in many disinherited areas in France and over fifteen other countries.  From the slums of Buenos Aires to orphanages in Sri Lanka, from the Calais jungle to the bangas of Mayotte, from small Filipino fishing villages to mountain villages in Morocco or deserted areas of Mali … we have met with thousands of families and children during these six years and shared some truly magical moments with them.

M’Agis is in its sixth year and is still growing. More and more NGO’s and associations contact us to propose projects both in France and elsewhere. This demand reinforces our conviction that this type of magic, promoting solidarity and without frontiers, is necessary today. This year several new magicians have joined  our association and will take part in this great adventure for the first time, putting their art, their energy and their enthusiasm into further social magic.

This year we hope to carry out five projects outside of mainland France.  Two have already taken place and were financed by M’Agis: one in Martinique in January and the other in Myanmar in February. In Martinique, we intervened in primary schools, kindergartens, medical centres, hospitals, associations … and in Myanmar, our magicians went to orphanages, isolated rural villages, markets, schools run by Buddhist monks etc.  A host of magic moments, once again, and every time stars in the eyes of the spectators, wide grins and the enchantment of magic.

In order to accomplish the upcoming three projects for 2018, we need some help and are counting on the magic of crowd-funding to enable us to achieve our goal.

Jordan, Indonesia and Nepal.  These are the three countries we have selected for our next international missions. Three countries where we have never performed and where we feel it to be urgent to bring a bit of enchantment.

Jordan, first of all.  As stated by Amnesty International, Jordan, with its 2.7 million refugees, is one of the top host countries of refugees in the world.  In partnership with different entities, including UNICEF or the Danish Refugee Council, we will intervene in various parts of the country between Irbid and Amman, and will offer magic shows and workshops in community centres, schools and both Syrian and Palestinian refugee camps.

Next of all, Indonesia.  This time it is on an island at the border with Western Timor that our magicians will operate. We will intervene in isolated villages, perched in the mountains, and in schools around Atambua: an area which has seen massive movement of populations and where war has left behind many impoverished families. M’Agis conceived this mission in partnership with Kasih Bunda, a NGO we know well as we organised together in 2016 a very successful magical project in Sri Lanka.

And finally, Nepal.  After a series of violent earthquakes in 2015, many parts of the country are still devastated. We hope to intervene in the region of Katmandou as well as in the district of Kavrepalanchok to offer shows and workshops in the areas most affected by the dramatic events of 2015.

Brief presentation of the magicians and members of M’Agis taking part in the 2018 projects.

Martial Sorriaux, alias Magic Mars, has been practicing magic from the age of 7.  He lives in Réunion where he has already shared his passion with many islanders.  With our association he has taken part in missions in India, Madagascar and Morocco. In January, he went to Martinique where he put on shows in a dozen different places.  He hopes to participate in the Nepal project this year.

Benjamin Gerson, alias Ben’J, is a magician, a juggler and an expert in soap bubbles!  In 2013 he took part in the M’Agis mission in Thailand and this year renewed the experience by putting his enthusiasm and passion in the service of isolated villages in Myanmar.

Léa Chataigner is Ben’J’s clown partner and often performs for young audiences. She joined M’Agis this year and took part in the mission in Myanmar where she enthusiastically participated in the shows and workshops for children in orphanages, schools, etc.

Yannis Lenoir, alias Yannis Why is a magical jack of all trades, who does great illusions, card tricks and close up.  For the first time this year he went on a M’Agis mission with Ben’J to Myanmar where he shared his passion for conjuring.

Romain Guédé is a photographer and video film maker who has participated over the last few years in several missions for M’Agis.  This year he will be happy to share a film of the M’Agis mission in Myanmar with those who wish to see it.

Rémi David is a writer and magician.  He is the founder and president of the M’Agis association.  He has taken part in several missions including the Philippines, Sri Lanka, Mayotte … and will participate, this year, in the Jordan project.

Florian Bertaud has been working in the humanitarian sector for the last five years.  His first contact with M’Agis was in 2013 during the M’Agis mission in Cambodia.  Enthusiastic about this new approach to helping people, he decided to act and take part in missions as a clown working with the magicians.  He participated in the missions in Laos and in the Calais jungle.  This year he will work with Rémi David in the Jordan project.

Yamina Adouhane is one of the founding active members of M’Agis and was treasurer for several years. She took part in the Mali, Burkina Faso and Mayotte projects helping both with writing the shows and running the conjuring workshops. She will take part in the Jordan project this year.

Pierre Poncelet has had a passion for magic for the last fifteen years and has just recently joined M’Agis. In his shows he always involves the public, mixing comedy, surprise and mystery. A film director by trade, he will use his skills to share the mission in Indonesia with the greatest number of people.

Amandine Poncelet works in the cultural sector and has rubbed shoulders with magic circles for years. She recently joined the association and will take part in the Indonesia project this year, taking photos and videos alongside Pierre who will make the film but will also be “on stage”.

Gaël Dewas has been a magician for ten years. He trained in new magic with the Centre National des Arts du Cirque, where he met Rémi David. He took part in the M’Agis project in Madagascar in 2014. This year it is with Pierre Poncelet that he will perform his extraordinary tricks in Indonesia.

William Touvier has been passionate about magic since primary school. He has just joined the association and will take part in his first M’Agis mission in Nepal.

The funds collected will pay for:

·         Purchase of material necessary for the magic workshops – this material will be left for the participants after our departure (estimated budget: 450 euros)

·         Payment of the commission of Kisskissbankbank and the cost of secure banking transactions : 8% of total amount (385 euros)

All the money collected will go to M'Agis.

If the amount of the fund-raising is exceeded, it would help us to finance the projects that are currently being organised for next year, both in France and abroad. The cost of a mission abroad is on average 1 200 € (1 000 € for the transport of two magicians and 200 € for the equipment needed for the workshops).

So your help is precious to make our action durable and to keep extending it.

Your name on the credits of one of the two films made by Romain Guédé and Pierre Poncelet, for the missions in Myanmar and Indonesia.

Your name on the credits of both films made by Romain Guédé and Pierre Poncelet for the missions in Myanmar and Indonesia.

Three 8x11 cm photographs of our magical projects + above

A 8x11 cm booklet of photographs of the different projects + above